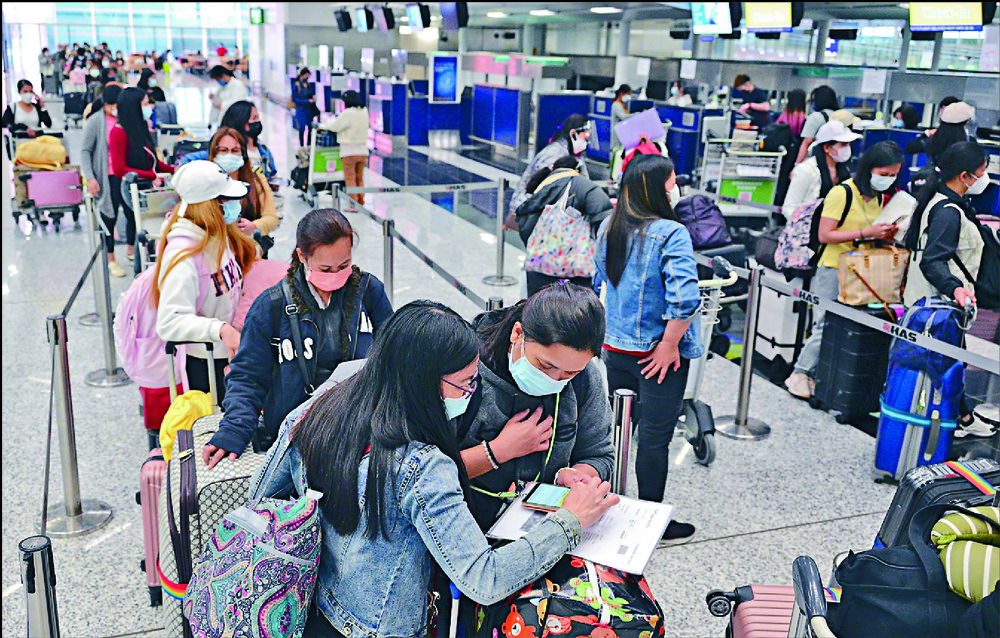 Quarantine then fly push for helpers

Foreign domestic helpers should be allowed to observe quarantine in their home countries before flying to Hong Kong to minimize the risks of flight suspensions caused by the circuit-breaking system if they test positive on arrival, a lawmaker has proposed.
Currently, airlines could be banned from landing in the SAR from a specific place for a week if three or more passengers on the same flight test positive for Covid.

The Democratic Alliance for the Betterment and Progress of Hong Kong member said the government should learn from Singapore's experience, where they allow helpers to quarantine before they board their flight.

The helpers' quarantine cost should be borne by the Hong Kong administration or employers be required to pay only HK$10,000, he said.

"Since July, Singapore has required helpers to undergo a 14-day quarantine and get tested multiple times in their home countries before coming to Singapore, as a result, the number of helpers testing positive upon arrival in Singapore dropped sharply," Leung said.

He added that this can ease the pressure on the local medical system.

"Currently, there are four designated quarantine hotels for domestic helpers, providing 1,600 rooms. But the helper employment sector estimates there are 5,000 to 10,000 helpers waiting to come to Hong Kong," he said.

The government should also allow foreign helpers to receive a third dose of a Covid-19 vaccine at the airport upon arrival, so they can rest during the quarantine period and be well protected when entering the community, Leung said.

Hong Kong Employment Agents Association chairman Lam Chi-hung said some helpers who were hired in 2020 have yet to come to the SAR.

Once flights from helpers' home countries are suspended, all preparation work done by employment agencies is wasted.

It takes 45 to 60 days for agencies to rearrange air tickets and quarantine hotels, Lam said, adding that some plane tickets and hotel bookings are not even refundable.
#COVID-19  #vaccine  #Covid
Add Comment