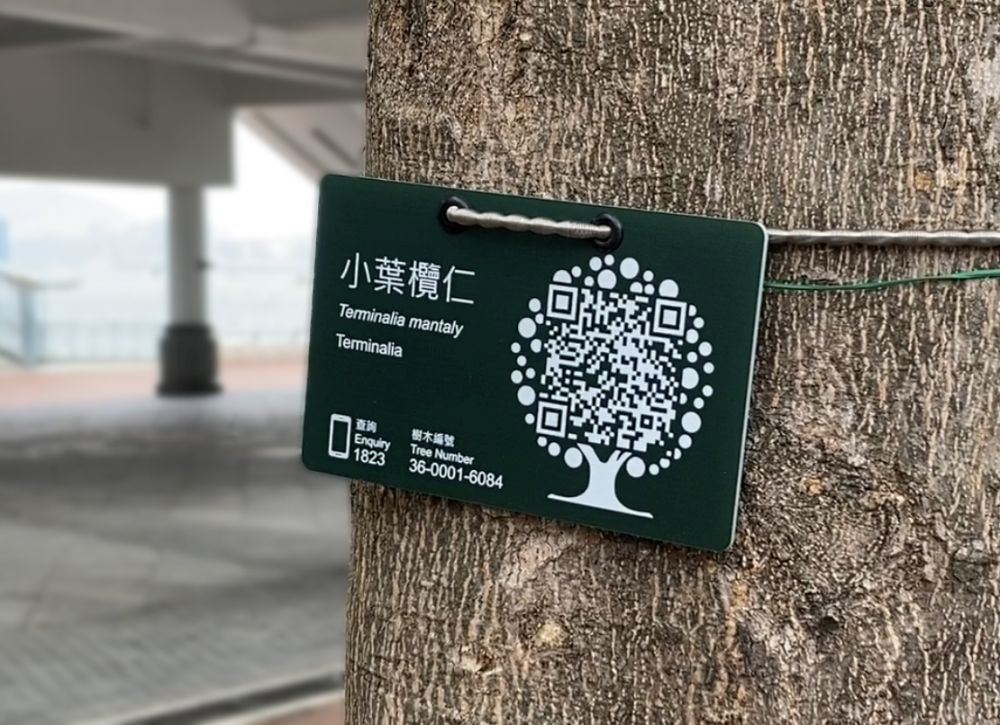 Tree tags carrying QR codes will be put up at more than 200,000 trees to allow citizens to learn more about them, Secretary for Development Michael Wong Wai-lun said.
The signs will be put on 10,000 trees in the initial stage of the scheme, and expand to cover 200,000 trees on pedestrian pavements in the beginning of next year.

There are about 1.7 million trees in Hong Kong maintained by the government, of which about a million are near high traffic locations, according to Wong.

She added that putting QR code on the tree tags aims at bringing convenience to citizens on reporting tree problems. The project also acknowledges the public more tree information, such as characteristics and fun facts about the tree.

About 200,000 trees will display the QR code at the beginning of next year, Chan expected

“The tree tags are placed at our eye levels,” representative of the consulting company Paul Chan Yuen-king said.

He added that basic information about the tree is listed on its tag, including a Chinese name, scientific name and common name of the tree.

“Through scanning the QR code on the tree tag with a mobile phone, citizens can enter the website of the tree management office,” Chan said. “In the website, citizens get more information about the tree, such as tree species and tree numbers.”

When citizens find the tree has a problem, they can also report to the authorities by calling or emailing “1823” - the number listed on the tree tag.

“As the tree number can also be found on the tag, citizens can tell the tree locations accurately while reporting the problem,” Chan explained.

The QR code tree tags are expected to cover the whole city, especially trees located in pedestrian pavements. Large transportation hubs, such as MTR stations and ferry terminals, are among them.

Chan said that about 10,000 tree tags involving 100 different kinds of trees will be placed in every district in Hong Kong in the first stage.

He hoped that the plan could enhance the relationship between trees and citizens.

"This QR code project can engage the citizens to converse trees by telling them more about the trees," Chinese University Shu-ying Hu Herbarium curator David Lau Tai-wai, who helped with collecting and writing the tree information, said.

Lau hoped the citizens will cherish the trees and let them grow vigorously.
Add Comment