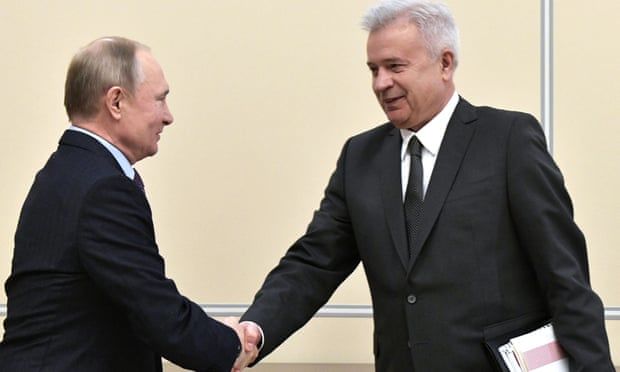 Billionaire oligarch steps down from Russia’s second-largest oil firm after being hit with EU and UK sanctions
The multibillionaire Russian oligarch Vagit Alekperov has stepped down as the president of the London-listed firm Lukoil after sanctions were imposed on him by the UK and EU.

In a statement to the stock market, Russia’s second-largest oil company said Alekperov, who is on good terms with Vladimir Putin, had formally notified the company of his decision to resign on Thursday.

Lukoil is among 27 firms whose shares were suspended by the London Stock Exchange in early March in order to avoid market turmoil. The Moscow-headquartered firm is not subject to sanctions.

However, the UK government has said Alekperov was targeted because of his role in the Russian energy sector, including an 8.5% equity stake in Lukoil that was worth £3bn before the shares were suspended.

Lukoil’s latest annual report detailing its tax payments to the Russian government do not appear to be available on the company’s website. But archived copies show it contributed more than £5bn to the Kremlin’s coffers in 2020 alone.

The sanctions imposed on Alekperov – whose personal wealth has previously been estimated at $20bn (£15bn) – are likely to have made it harder for him to exercise his duties as the company’s president.

The restrictions prevent him, or any boats or planes belonging to him, from entering the UK and EU, where Lukoil has significant business interests.

These include a supply agreement with the Stanlow oil refinery in Ellesmere Port in the north-west of England, which supplies 16% of the UK’s road fuel and is ultimately owned by the billionaire Ruia brothers behind India’s Essar conglomerate.

Litasco, a Switzerland-based subsidiary of Lukoil, has a key trading relationship with Stanlow that involves the supply of oil products.

The deal includes a trade credit facility that means Litasco could, in theory, claim ownership of Stanlow’s oil terminal if Essar Oil (UK) were to default on payments.

Alekperov, 71, is a former oil rig worker, born in Baku, Azerbaijan, who rose to become deputy oil and gas minister of the Soviet Union and later one of post-Soviet Russia’s richest men.

After the fall of the USSR, he took control of three large state-controlled oil fields and set up Lukoil, Russia’s second-largest oil company behind Rosneft and the biggest that is not state-owned.

He has frequently been pictured with Putin and was among a large group of oligarchs who were summoned to the Kremlin in late February, in the days leading up to the invasion of Ukraine.
Add Comment