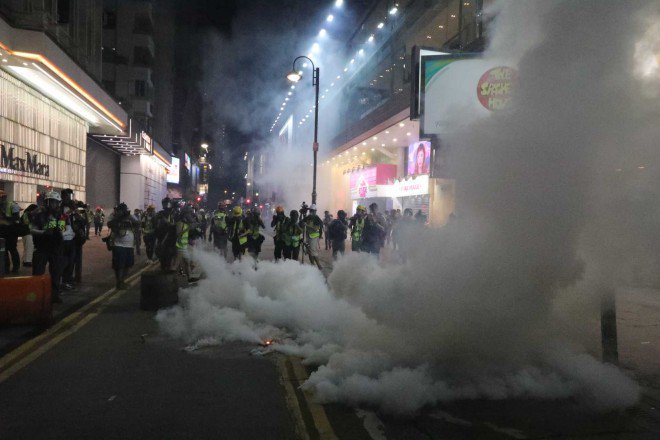 Tens of thousands of protesters in Hong Kong have defied a police ban to march from the busy shopping hub of Causeway Bay to Central, as radical groups smash facilities at MTR stations in Admiralty and Wan Chai, while police fire tear gas and deploy water cannons in retaliation against petrol bomb attacks near the government headquarters.

As night falls on the city, protesters splinter off into various areas, with more clashes in Causeway Bay and Wan Chai, before a fight between demonstrators and a group of men erupts in Fortress Hill, near North Point.

Police had for the second time banned a rally and march planned by the Civil Human Rights Front over fears of violence as the city enters its 15th straight weekend of protests. On Saturday, skirmishes occurred in various parts of the city as pro-Beijing groups clashed with anti-government protesters, but no major violence was reported.

The social unrest gripping Hong Kong was sparked by the extradition bill, which would have allowed the transfer of fugitives to jurisdictions with which the city has no such agreement, including mainland China. While authorities have announced the withdrawal of the bill, the movement has since grown into a widespread anti-government campaign with protesters demanding an inquiry into police action over the protests and universal suffrage.