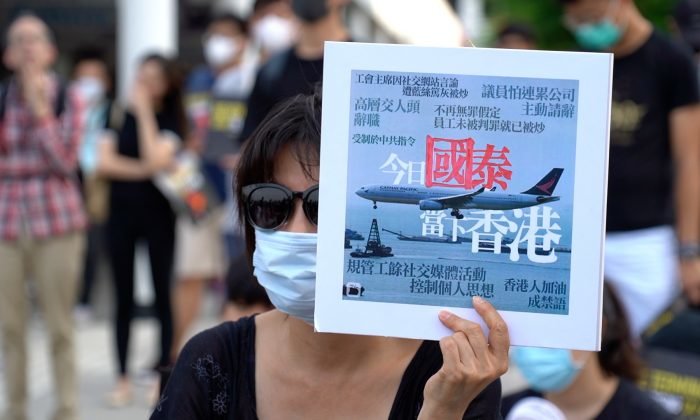 Cathay Pacific has responded to a sharp decline in passenger numbers in August by axing a number of short and long-haul routes, cutting flights to other destinations, and ordering a hiring and spending freeze.

The airline revealed it was suspending flights on Thursday, a day after it announced a 38 per cent drop in customers in August, and said it expected September to also be challenging.

With a difficult winter ahead, and the anti-government protests in Hong Kong showing no signs of coming to an end, the carrier has suspended flights to Dublin, Medan in Indonesia, and daytime flights to Paris and Frankfurt.

Cathay said the Dublin route would be suspended on November 7, and from next year would only operate during the summer months.

It has also cut the number of flights to New York, Washington and Vancouver, with an analyst predicting that short-haul routes to mainland China are likely to be next.

On Wednesday, Hong Kong’s biggest airline unveiled an 11.3 per cent slump in passengers compared to August last year, the busiest month for business, driven by a 38 per cent fall in people coming to the city as a result of the increasingly violent protests. The decline in passengers, as a percentage, was the single biggest fall in a decade.

In a memo to staff, new CEO Augustus Tang Kin-wing instructed directors and department heads to “examine” their expenditure, boost productivity, and delay non-critical spending amid a new round of belt tightening.

Additionally, the company said it would freeze hiring non-flying staff. A company director and expenditure control committee would need to approve any essential new hires or replacement headcount for non-flying positions.

Tang said the unrest in Hong Kong, the US-China trade war, and a slowing global economy were “driving uncertainty”, resulting in a “significant softening in advance bookings” and continued pressure on the pricing power it had on airfares.

The airline is in the final year of a three-year restructuring to save HK$4 billion, following two years of back-to-back losses in 2016 and 2017. The company said earlier this year that it would not meet its cost saving targets by year end.

Cathay said its capacity would be down “slightly” during the winter flying season, which runs from the end of October until March next year, as opposed to a planned expansion of 6 per cent, signalling a significant cut in flying activities.

The late-night Cathay Dragon flight to Beijing from Hong Kong also appeared at risk. But nighttime flights to Paris and Frankfurt, better timed for business travellers, were also unaffected.

Flights to Vancouver are being reduced from 17 to 14 a week from October 29 onwards, similarly Washington would lose one of its five weekly flights, and New York JFK is expected to fall from 21 to 18 services a week.

Flights in and out of mainland China, which has become the worst performing market for Cathay Pacific, are likely to face cutbacks next. In its August report, Cathay trimmed the number of flights and seats into the market by 9.3 per cent, but demand fell more than three times that, at 28.1 per cent.

“We can expect significant reductions in capacity on most distressed routes, for example, mainland China,” said Luya You, a transport analyst at Bocom International.

“Cathay are struggling to find a balance between long-term growth and short-term profitability. It makes sense then that they are resorting to significant reductions in capacity for the winter season.

“Although this could impact their full year 2020 growth plans and profitability if demand rebounds quickly and Cathay find themselves unable to match that growth.”

You was more concerned that Cathay would be too aggressive with flight cuts, and said based on historic trends, passenger demand typically rebounded very quickly.

“2019 has been terrible for nearly all airlines,” she said. “Unless we actually fall into some major global recession next year, it’s possible that when demand rebounds Cathay may be under equipped because of how much they’ve been hammered this year.”

Some planned investment is expected to continue, including new first and business class upgrades, to help the airline maintain its competitive edge, while rolling out a new dining offering for economy travellers.

Under pressure from Beijing to rein in staff taking part in illegal protests, Cathay has been rocked by resignations and reshuffles among its senior management. The airline has warned that those who “support or participate in illegal protests” will be disciplined or sacked.

Hong Kong saw tourism arrivals fall 40 per cent in August, the largest downturn since the 2003 Sars outbreak, after a 5 per cent drop in July.

On top of that, the number of mainland tour groups visiting Hong Kong fell 90 per cent in the first 10 days of September, according to the Travel Industry Council. That followed a 63 per cent decline in August compared to a year ago.