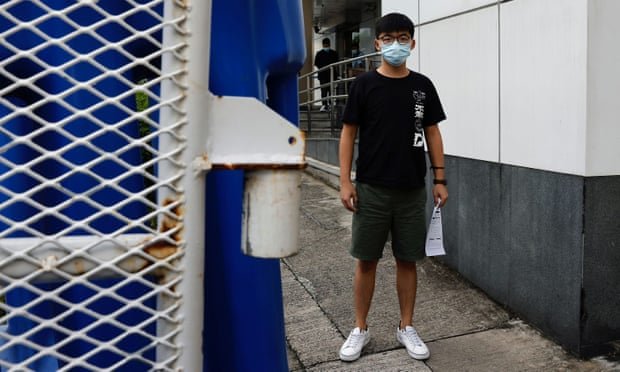 Hong Kong authorities have arrested Joshua Wong over a 2019 protest and for allegedly violating an anti-mask law which courts have since found partially unconstitutional, according to the activist’s social media accounts.

Wong, 23, is one of the most high-profile figures of the pro-democracy movement which drew mass protests on to the streets of Hong Kong throughout much of 2019, before the pandemic and then draconian national security laws brought them to an end this year.

The British foreign secretary, Dominic Raab, said he was “deeply concerned” at Wong’s arrest and described it as “another example of HK authorities targeting activists”.

I am deeply concerned about the arrest of Joshua Wong, another example of HK authorities targeting activists. Chinese and HK authorities must respect the rights and freedoms of the people of Hong Kong, as protected in the Joint Declaration.

Posts on Wong’s official social media accounts said on Thursday afternoon he had been arrested over participating in an unauthorised assembly on 5 October 2019.

“He is told to have violated the draconian anti-mask law, which was earlier ruled partially unconstitutional by the court of appeal,” the post said.

Wong was released on bail a few hours later, and told media the international community should focus less on prominent activists such as him and call for the release of the 12 Hongkongers detained in mainland China after allegedly attempting to flee Hong Kong for Taiwan by boat.

In August Wong was among 24 arrested over attending a candlelight vigil for the anniversary of the Tiananmen Square massacre.

It has also been confirmed to the Guardian that Koo, was arrested earlier on Thursday for allegedly participating in an unauthorised protest. The 74-year-old is being treated for late-stage cancer and had a medical appointment scheduled on Thursday afternoon. He was last jailed in June for desecrating the Hong Kong flag, local media reported at the time.

The 5 October rally was attended by thousands of people, including Wong. It was partly driven by an announcement earlier that day that emergency regulations would be invoke to pass legislation outlawing the wearing of masks, which protesters frequently used to shield their identities or protect themselves from police crowd control tactics. Analysts said the move by Hong Kong’s chief executive, Carrie Lam, marked the beginning of authoritarian rule. Thousands took to the streets in protest for a night that descended into violence, with teargas deployed by police, and fires lit by protesters at two metro stations.

An appeal against the anti-masks law was taken to Hong Kong’s highest court in April, which found it to be partially unconstitutional.

The amended anti-mask law remains active despite a concurrent legal requirement that all people must wear face coverings in public because of the coronavirus pandemic.

A US-based activist and friend of Wong, said the 23-year-old had been reporting to the police station twice a week while on bail for a separate protest-related case.

“This is where he was arrested earlier for participating in an unauthorised assembly and violating the anti-mask law,” Jeffrey Ngo tweeted.

“The government creates the illusion of relative normality – through a week or two of relative tranquility at a time – to lower your guard. Then they gaslight … you with sudden crackdowns.”

Wong’s fellow co-founders of the now disbanded Demosisto party have also been targeted. Agnes Chow was arrested last month under the new national security law, and Nathan Law fled to the UK.

Johnny Patterson, the director of the UK-based NGO Hong Kong Watch, said: “Joshua Wong’s arrest is the latest example of flagrant political prosecution in Hong Kong. Beijing, and their counterparts in the Hong Kong government, are waging a campaign of ‘lawfare’, abusing the courts to silence their political opponents and create an atmosphere of self-censorship.”

Sophie Richardson, the China director at Human Rights Watch, said the arrest was an indictment of Hong Kong’s legal and political systems.

“Today’s arrest of Joshua Wong is emblematic of the downward spiral of human rights in Hong Kong,” she said. “The authorities are criminalising participation in protests using laws at odds with international standards, bringing dubious lawsuits to hobble pro-democracy voices, and failing to check excessive use of police force.”

Wong’s case is scheduled for a magistrates court hearing on Monday.