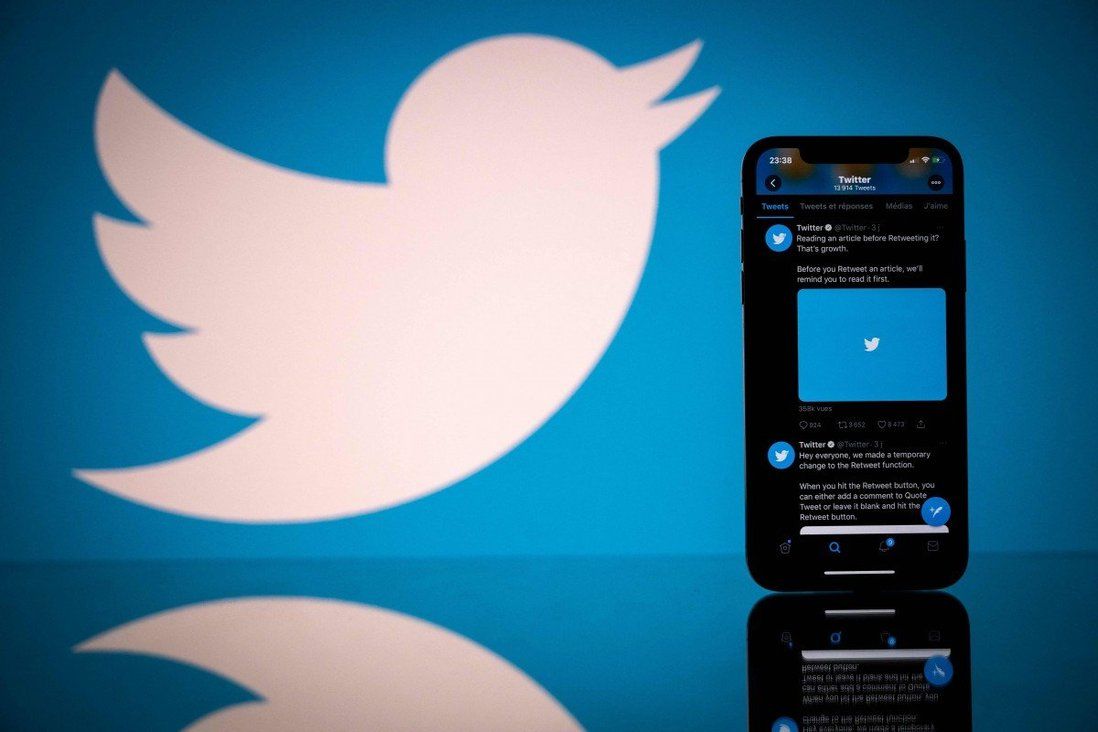 Not long after pro-establishment lawmaker Holden Chow Ho-ding took to Twitter in January, he noticed foreign journalists picking up his comments to quote in their articles.

Keeping to the social media platform’s 280-character limit, he has fired off succinct tweets that sometimes hit hard against what he considers unwarranted attacks on Beijing.

“My supporters consider me a ‘wolf warrior’; I take it as a compliment,” said Chow, referring to a popular term taken from a movie title and used to describe a more aggressive style of diplomacy from Beijing.

“When others accuse China with a series of falsehoods, insult Chinese people and do it on purpose, we have no choice but to hit back.”

Chow, 41, is among a wave of pro-establishment politicians in Hong Kong who have recently taken to Twitter to share their views and counter what they consider “a one-sided conversation” dominated by the city’s liberal, opposition voices.

Twitter was used by journalists and a few demonstrators during the Occupy protests of 2014, which shut down parts of the city for 79 days. It became more popular among activists, protesters and pan-democrat lawmakers during the anti-government protests of 2019, with some tweeting actively to lobby foreign support.

Former district councillor Dominic Lee Tsz-king said he did not know the term “wolf warrior”, but would not mind being dubbed that for his pro-China tweets.

His personal description on Twitter says he is a “politician/entrepreneur educated in America, fed up with the lies and hypocrisy of the West, determined to expose those lies on Twitter”.

Lee said the Chinese government had been making a lot of efforts at international persuasion, with its spokespeople setting up Twitter accounts as well.

“We thought it would be a good idea as Hongkongers to join forces with our leaders in the country and engage in this ‘international warfare’ on Twitter,” he said. 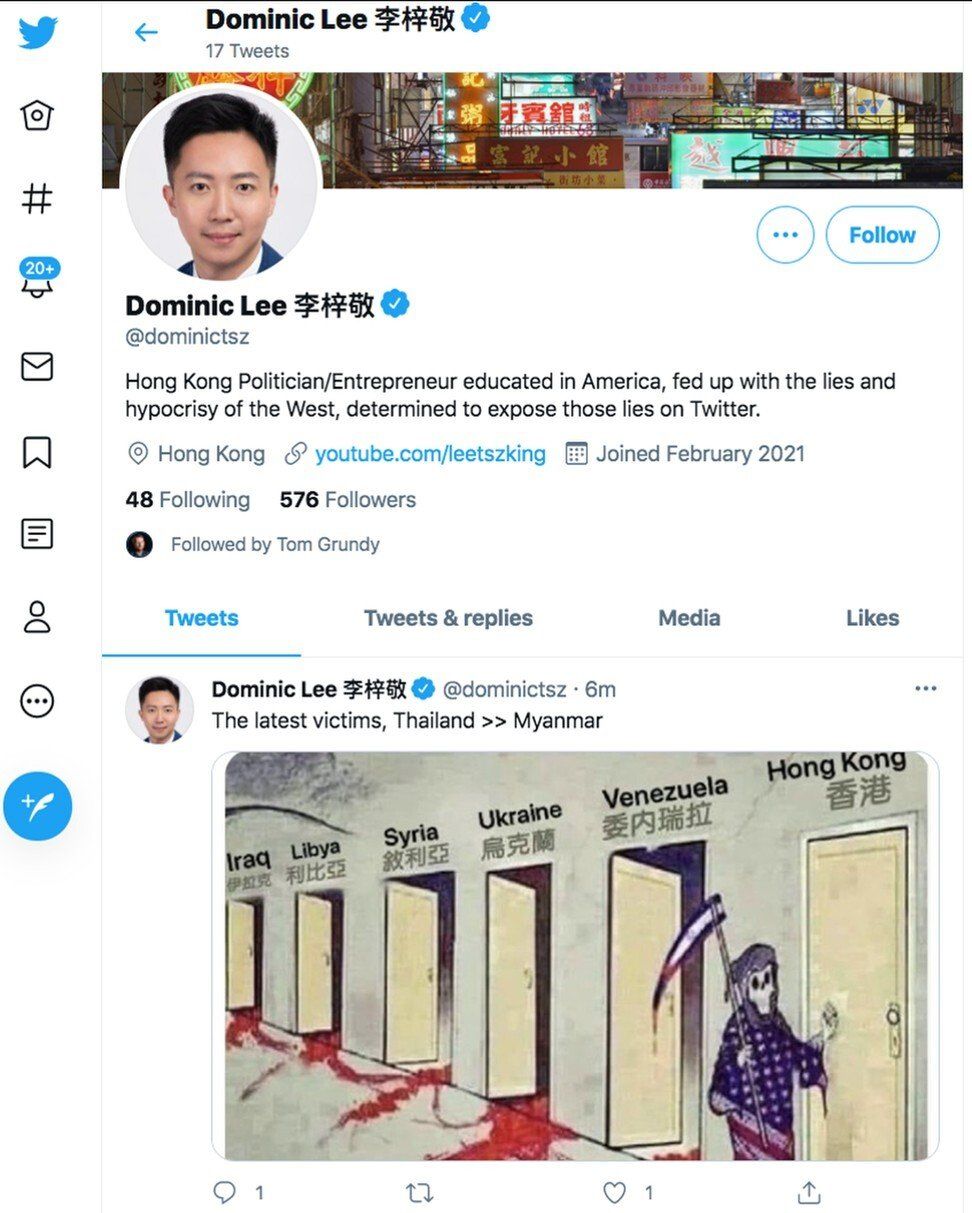 Lee, 37, who lost in the 2019 district council elections that were swept by the opposition, said he expected more young representatives of the pro-establishment camp to speak up, and many had already taken to Twitter recently to do so.

“I think this is going to be a trend,” he said. “We felt that on Twitter, it’s basically a very one-sided conversation, very liberal, and our pro-establishment voices are not being heard at the international level.”

He said he used to be vocal within his camp, but more careful when speaking openly as he hoped to win over “mild yellow” opposition supporters. But since losing the election, he has felt less pressure to hold back when voicing his views.

“I started with Facebook more than 10 years ago, then I found that my number of followers was not growing, and I was appealing to the same group of people,” she said.

“Twitter is international. If you talk about Causeway Bay traffic, nobody is interested. You need to make very incisive points on Twitter. So I started commenting on the hottest topics that are internationally interesting, and Xinjiang is a very hot topic.” 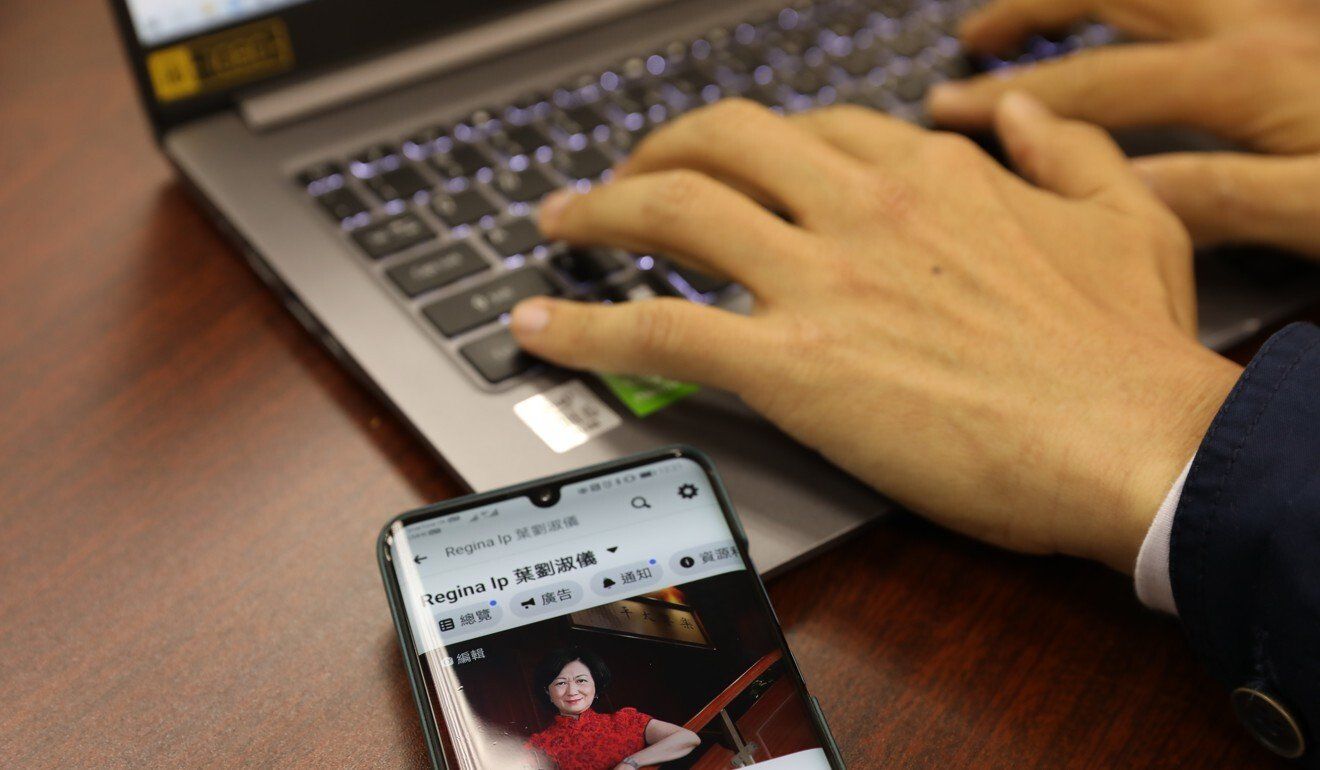 Pro-establishment lawmaker Regina Ip got on Twitter because she felt it reached a different audience than Facebook.

She said she was “very angry” when former United States Secretary of State Mike Pompeo accused China of committing genocide against Uygur Muslims in Xinjiang province.

“So I decided to do something provocative, by posting the photo of Dilraba,” she said, referring to her controversial tweet in January featuring a picture of Dilraba Dilmurat, a popular actress, singer and model of Uygur origin.

In that tweet, Ip said Dilraba was not Xinjiang’s only success story, and asked: “What genocide?”

Shrugging off the criticism that came her way, Ip said: “That provoked a very sharp rebuttal from the international media. They thought I was simple-minded and stupid, but there was actually a wide sharing of my post. It’s OK, people have their right to comment. Counter-attacks are quite common online.”

Despite the stir, Ip said she does not consider herself a “wolf warrior”.

“At a young age, while I was in the civil service, one of my bosses told me never to be strident, to always leave some room for manoeuvre. I was taught that in government, ” she said, adding that she sees herself as an intermediary between Hong Kong’s “deep blue” pro-Beijing camp and the international community.

Time-consuming, but it helps

Rose Luqiu Luwei, an assistant professor at Baptist University’s journalism department, noted that Twitter was still not popular among local politicians and activists.

But, she added: “For activists who want to reach international audiences, especially foreign media, international organisations, foreign leaders and politicians to call for international support, Twitter is crucial.”

Chow, Lee and Ip said they vary the content they put out over different social media platforms, as Facebook is more efficient for reaching local audiences, while Instagram is more visual.

Chow said he managed his Twitter account himself, instead of delegating it to his team, as he used it to stay in touch with the foreign media and friends.

“I feel quite happy that as I use Twitter more, I am slowly picking it up,” he said.

The new Twitter users said they also remain mindful of the amount of time social media can soak up.

Lee said that when he was campaigning for election, he always analysed how many people he would reach before deciding whether to invest time on social media.

Ip said that she plans and writes her tweets herself before her team uploads them with photos. Some of her photographs accompanying online festive greetings have drawn a lot of attention.

For her Valentine’s Day greeting, for example, she appeared in a photo wearing a qipao and flashing the Korean “heart” sign with her thumb and index finger.

“To enhance my appeal on Instagram, I told my staff I should invest some effort in shooting better photos. So I started doing special portraits since the Mid-Autumn Festival last year,” she said.