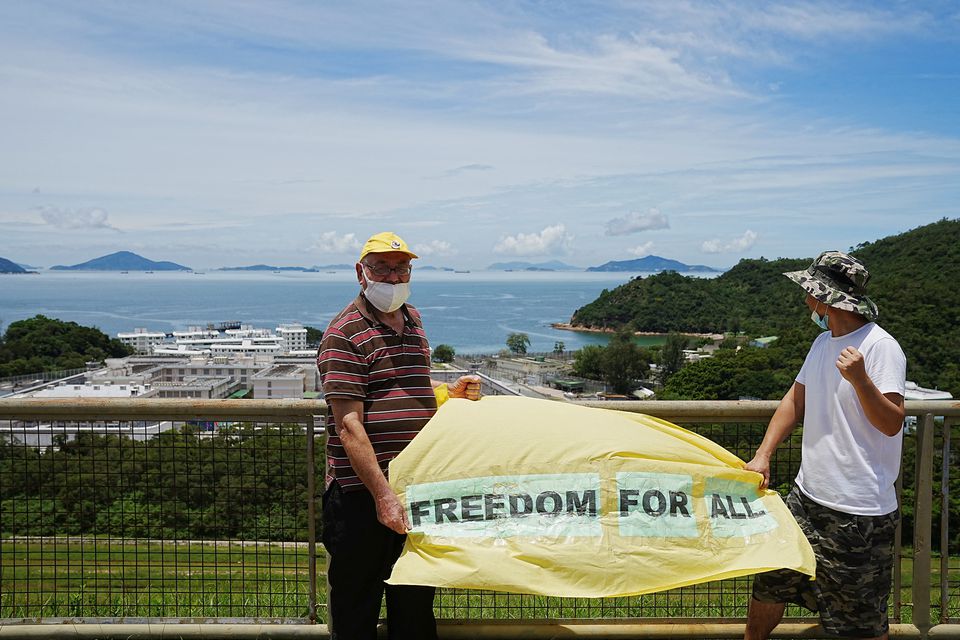 A Catholic priest launched a three-day protest on Thursday in sweltering heat outside a Hong Kong maximum security prison, demanding the release of activists and democratic politicians held under a sweeping national security law.
Milan-born missionary Franco Mella, a longtime rights activist in the Chinese-ruled city, vowed to refuse food as he stood on a dam wall overlooking the Shek Pik prison on an isolated stretch of Hong Kong's Lantau Island.

The 74-year-old, who took part in the mass pro-democracy protests in 2019 that roiled the global financial hub, told reporters Hong Kong people would be "more confident in the future" if authorities released the detained activists.

"The weather is so hot. So they are suffering inside. And the messages (are) we are with you, don't lose hope. Let's continue to fight for everybody's freedom."

Mella pledged not to eat for the entire period of his action, a challenge made harder by temperatures of more than 30 degrees Celsius (86F).

The Hong Kong government did not immediately respond to a Reuters' request for comment.

About 200 people have been arrested under the national security law since China imposed it on the former British colony in June 2020 to quell the 2019 unrest. Demonstrations have been small and rare since the law came into force, in part due to government Covid-19 restrictions on public gatherings.

While international critics, including some governments, have warned the law has been used to effectively silence opposition politicians, civil society and some media groups, both Chinese and Hong Kong officials have said repeatedly the law was needed to restore stability after months of sometimes-violent demonstrations.

Hong Kong officials have said the law is enforced according to evidence and not based on a person or group's background.

The top U.S. diplomat in Hong Kong on Monday warned that the "crude and chilling" use of law was threatening Hong Kong's long-standing role as financial center.

The national security arrests condemned by Washington include that of another important Catholic figure in Hong Kong, 90-year-old Cardinal Joseph Zen.

Mella was among more than a dozen Christian representatives who publicly petitioned then-Hong Kong leader Carrie Lam in January to grant an amnesty to media tycoon Jimmy Lai and other political activists who are jailed or in custody.
#COVID-19  #Covid
Add Comment