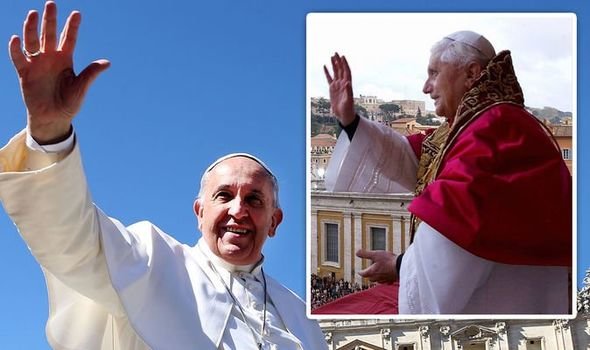 Pope Francis may step down before the end of the year

Pope Francis may step down before the end of the year, according to a source close to the Vatican.
The 83-year-old became head of the Catholic Church following the resignation of Pope Benedict XVI – a controversial move and the first of its kind in more than 500 years. However, a source close to Pope Francis claimed he would only serve for seven years, stating he would follow in the footsteps of his predecessor. Austen Ivereigh is the former Director for Public Affairs of the previous Archbishop of Westminster, Cardinal Cormac Murphy-O'Connor and continues to work closely with the Vatican.

He said: “I don’t think there’s ever been any doubt that he will resign in 2020.

“He made clear from the beginning that he regarded Pope Benedict’s (XVI) act as a prophetic act of great modesty and he would have absolutely no problem in doing the same.

“What was interesting was he said to Mexican television in 2014 that he believed that he would have a short papacy of about five years.

“What I’m hearing now from people close to him is that he’s going to need seven years to achieve his five-year plan and that, of course, would mean staying on until 2020.”

If Mr Ivereigh is correct, it suggests Francis could resign after Christmas so as to avoid letting his papacy run into 2021.

Speaking in a lengthy television interview with the Mexican programme ‘Noticieros Televisa,' the Pontiff responded to a question from journalist Valentina Alazraki about the length of his papacy.

He said: “I have the feeling that my pontificate will be brief.

”Four or five years. I do not know, or two, three. Well, two have already passed.

"It's like a little vague feeling, but I have the feeling that the Lord puts me [here] for a brief thing and not more.”

Continuing on the theme, Ms Alazraki asked the Pope – then 79 – about the idea of resigning at 80.

He responded: "I believe that the Papacy has something of last instance. It is a special grace.

If the comments are anything to go by, then the Pope will retire in the next two weeks.

But he has committed to several events over the next few days, during one of the most important periods of the Christian calendar – Christmas – as billions celebrate the birth of Jesus Christ.
#Pope Francis

Jan Bremse 209 days ago
From the Twitter of:
Austen Ivereigh
@austeni

Dec 24
I never said the pope would resign soon, and have been saying over and over these past weeks the opposite: this is a pontificate in full flow, energised by Covid crisis, about to implement major Vatican reforms and planning trips to Iraq and South Sudan.

Aleksandr Kalve 209 days ago
This below is from Austen Ivereigh:

“The #fakenews story keeps getting picked up about my predicting the pope’s resignation in 2020. Because he has ignored my tweets and messages, I have now emailed (attached) the @Daily_Express reporter @CallumHoare asking for a correction and its removal. Don’t hold your breath."
View all comments (2)Add comment