Hostility, extremism and violence are "betrayals of religion" he told an inter-faith prayer service.

Iraq has been wracked by religious and sectarian violence, both against minorities and between Shia and Sunni Muslims too.

Receiving the head of the Roman Catholic Church at his home in the holy city of Najaf, Grand Ayatollah Ali al-Sistani said Christians should be able to live in peace and security like all other Iraqis.

The meeting was seen as a highly symbolic moment in the Pope's visit, which is his first international trip since the start of the coronavirus pandemic more than a year ago, and the first ever papal visit to Iraq.

Covid-19 and security fears have made this his riskiest trip yet.

The 84-year-old leader of the Catholic Church earlier told reporters that he had felt "duty-bound" to make the "emblematic" journey, which will see him visit several sites over four days in Iraq.

What else did the Pope say?

He delivered his message at the site of the ancient city of Ur, held to be the birthplace of the Prophet Abraham, who is revered in Judaism, Christianity and Islam.

An inter-faith service brought together representatives of Iraq's religions, including Shia, Sunni, Christian and Yazidi clerics.

"We believers cannot be silent when terrorism abuses religion," the Pope said.

"Indeed, we are called unambiguously to dispel all misunderstandings. Let us not allow the light of heaven to be overshadowed by the clouds of hatred."

He singled out the suffering of the Yazidi community which had "mourned the deaths of many men and witnessed thousands of women, girls and children kidnapped, sold as slaves, subjected to physical violence and forced conversions".

Later on Saturday, Pope Francis celebrated Mass at St Joseph's Cathedral in central Baghdad. Security was tight with special forces deployed in the area and concrete barriers erected outside the church. 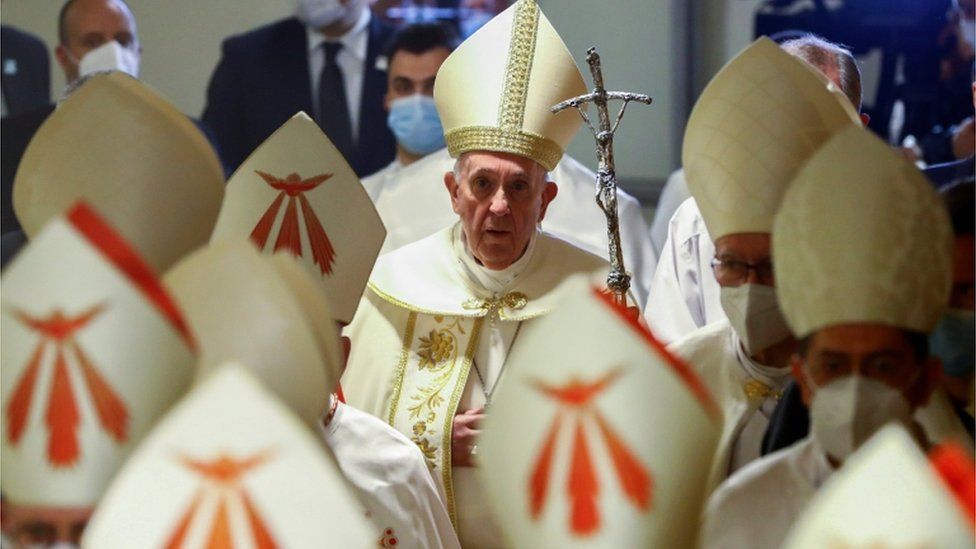 Why was the visit to the ayatollah so important?

Audiences with the reclusive 90-year-old are rare but he received the Pope for around 50 minutes, the pair talking without face masks. 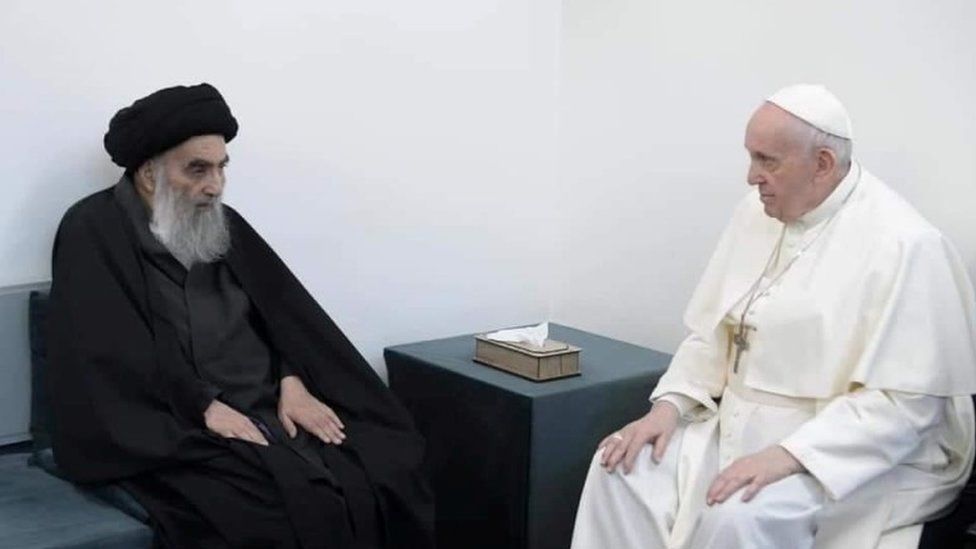 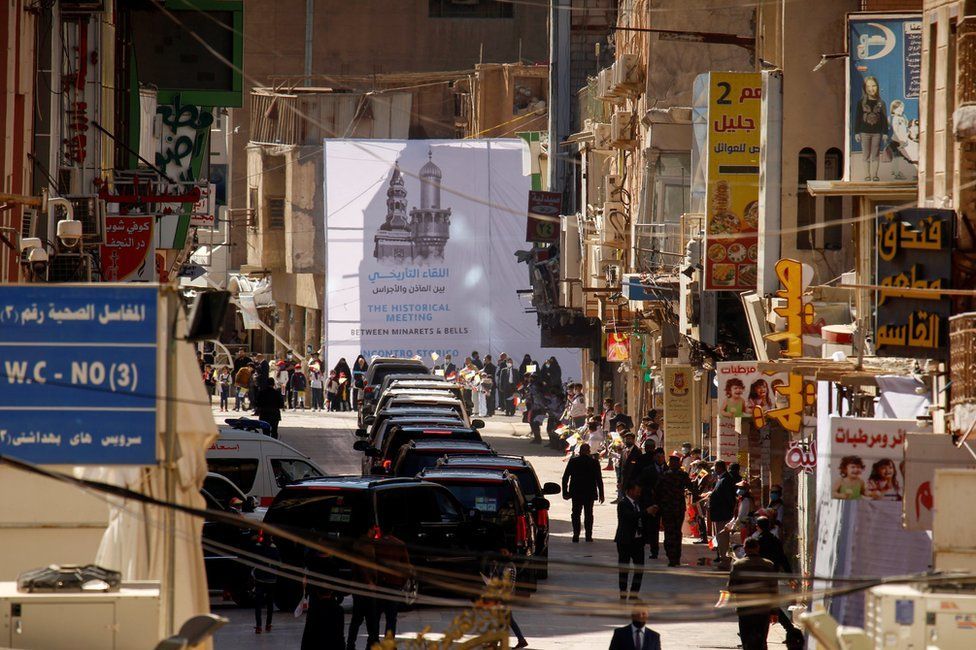 He "affirmed his concern that Christian citizens should live like all Iraqis in peace and security, and with their full constitutional rights", his office said.

Pope Francis thanked the ayatollah for speaking up "in defence of those most vulnerable and persecuted" amid the violence and hardships of Iraq's recent history, the Holy See press spokesman said.

The Shia leader's message of peace, he said, affirmed "the sacredness of human life and the importance of the unity of the Iraqi people".

This has been a meeting years in the making: an encounter between the leader of the Catholic Church and one of the most powerful figures in Shia Islam: Grand Ayatollah Ali al-Sistani.

For a pope passionate about reaching out to other faiths, the meeting is arguably the most symbolic moment of his visit to Iraq.

The dwindling Christian community here has suffered violence at the hands of Sunni extremists but some also fear the presence of Shia armed groups - and the cleric is seen as a voice of moderation.

The Pope visited Ur, the ancient birthplace of the Prophet Abraham, hoping that the biblical figure revered by Christians, Muslims and Jews, can spur reconciliation today.

How vulnerable are Iraq's Christians?

One of the world's oldest Christian communities has seen its numbers plummet over the last two decades from 1.4 million to about 250,000, less than 1% of the country's population.

Many have fled abroad to escape the violence that has plagued the country since the US-led invasion in 2003 that ousted Saddam Hussein.

Tens of thousands were also displaced when militants from the Sunni Muslim Islamic State (IS) group overran northern Iraq in 2014, destroying their historic churches, seizing their property, and giving them the choice to pay a tax, convert, leave or face death.

A US state department report on religious freedom in Iraq in 2019 found that Christians, as well as Sunni Muslims, complained of harassment at checkpoints by Shia security forces and some discrimination in education.

On his arrival on Friday, the Pope said Iraq's Christian community should have a more prominent role as citizens with full rights, freedoms and responsibilities.

Who are Iraq's Christians?

*  According to the US state department, Christian leaders estimate there are fewer than 250,000 Christians remaining in Iraq, with the largest population - at least 200,000 - living in the Nineveh Plain and Kurdistan Region in the north of the country

*  Approximately 67% of those are Chaldean Catholics, whose Eastern-rite Church retains its own liturgy and traditions but recognises the authority of the pope in Rome. Another 20% are members of the Assyrian Church of the East, believed to be the oldest in Iraq

What is the Pope's schedule?

Due to security concerns and a sharp rise in Covid-19 infections, the Pope will have limited exposure to the public.

He has had two shots of the BioNTech/Pfizer vaccine, and his entourage will have been inoculated, but there are fears the trip could become a super-spreader event given the large crowds expected.

When he arrived on Friday, the Pope was seen to have a pronounced limp, suggesting that his sciatica condition continues to bother him. 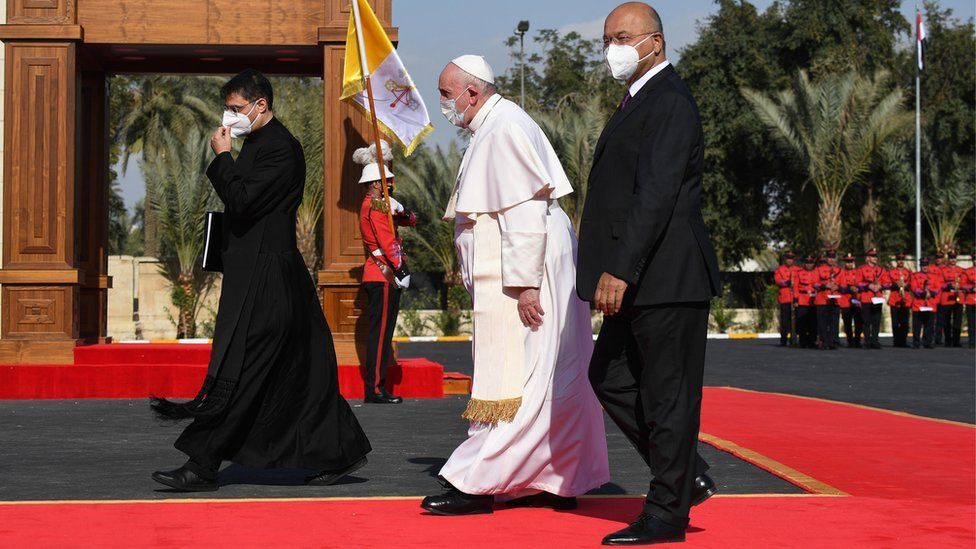 On Sunday, the pontiff will visit Mosul, where he will say prayers in Church Square for the victims of the war with IS, which left tens of thousands of civilians dead.

Later, he is scheduled to lead Mass at a football stadium in Irbil in the north, which up to 10,000 people are expected to attend.

The Pope will also visit nearby Qaraqosh, where Christians have returned since the defeat of IS in 2017.

About 10,000 Iraqi Security Forces personnel are being deployed to protect the Pope during his visit, while round-the-clock curfews are also being imposed to limit the spread of coronavirus.

Some Shia militant groups have reportedly opposed the visit, suggesting the tour amounts to Western interference in the country's affairs. 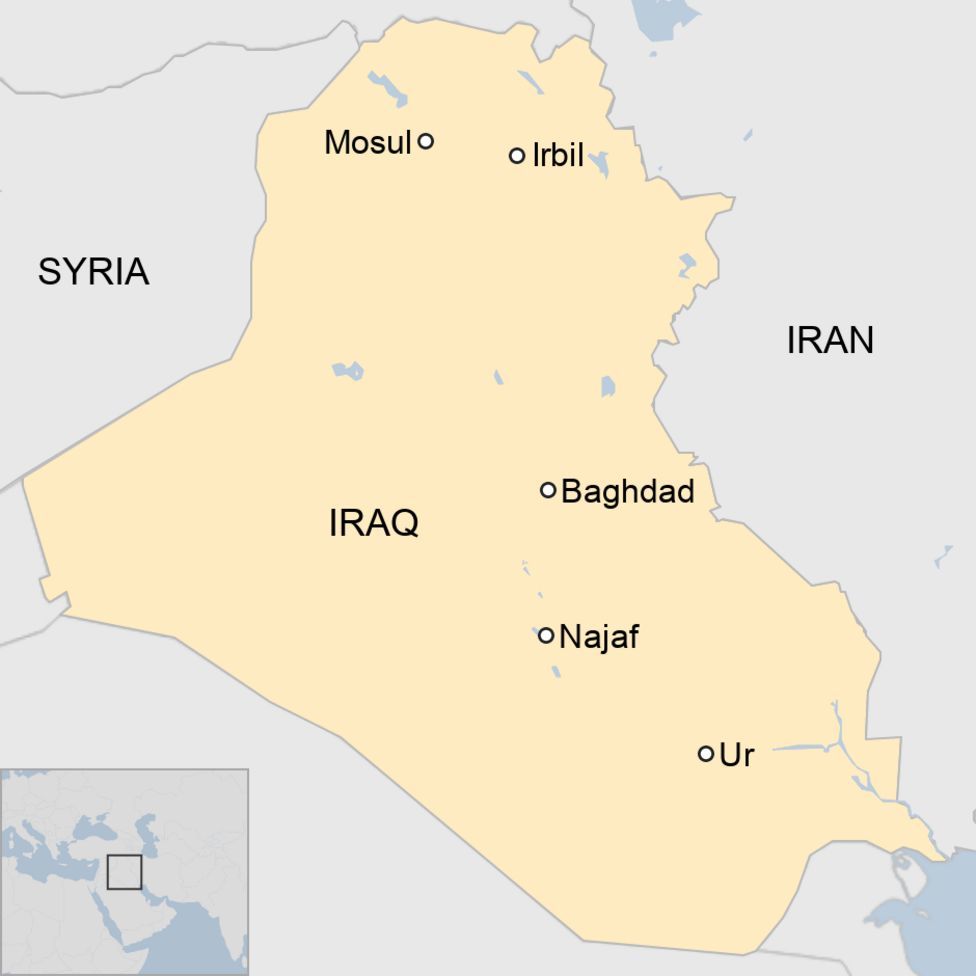