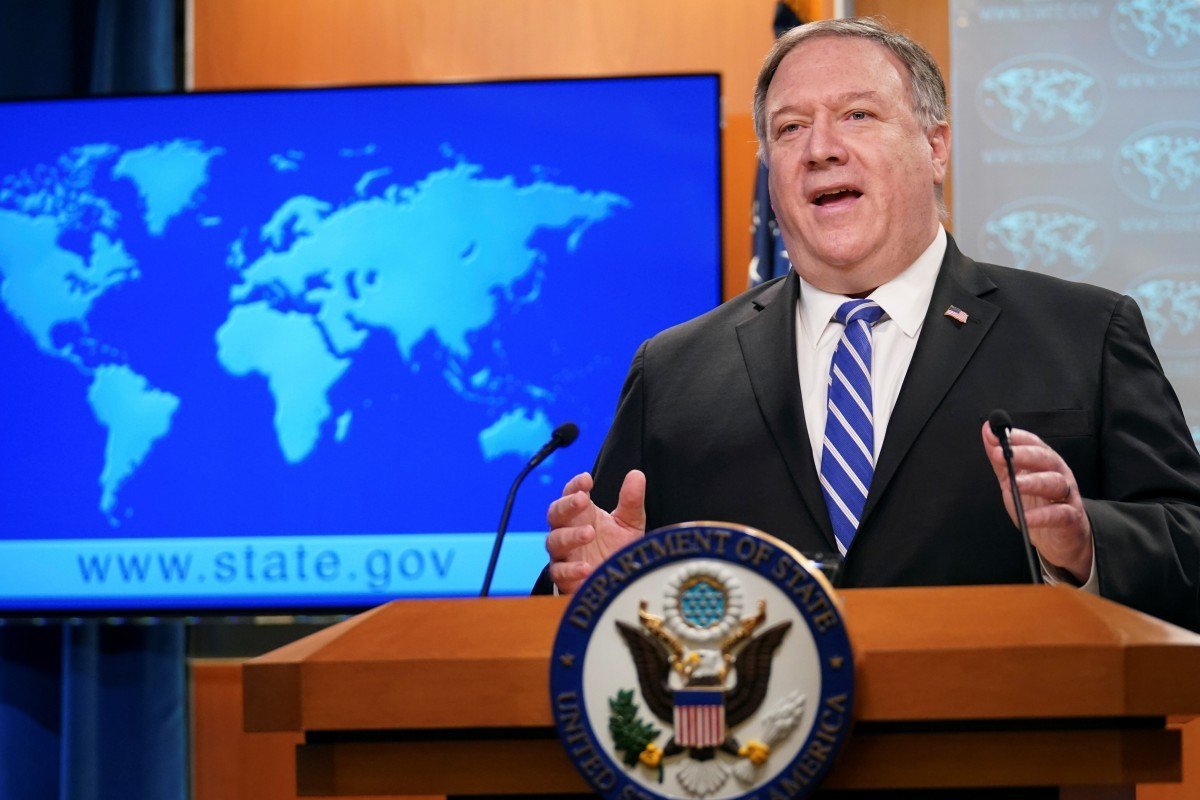 US State Department waiting to see if Hong Kong situation will be addressed by National People’s Congress in its annual meeting, which begins May 22. Pompeo also reiterated accusation that China refuses to share coronavirus data and issues call for Taiwan to join WHO meeting

US Secretary of State Mike Pompeo said a report on Hong Kong’s autonomy that could trigger sanctions will be postponed until after the Chinese government’s annual legislative session this month, to take into account what Beijing says about the semi-autonomous city during the meeting.

“Right now we're delaying our report to Congress that will assess Hong Kong’s autonomy to allow us to account for any additional actions that Beijing may be contemplating in the run-up to National People’s Congress that would further undermine the people of Hong Kong's autonomy as promised by China,” Pompeo told reporters in Washington.

Under new reporting requirements stipulated by the Hong Kong Human Rights and Democracy Act, which was enacted on November 27 after garnering bipartisan support, Pompeo must certify an annual assessment of Hong Kong’s autonomy. It requires that the report be distributed to the foreign affairs committees of the Senate and House, and to several other congressional committees, within 180 days of the act’s passage.

The annual general assembly session of the National People’s Congress, China’s parliament, is set to begin on May 22, after being delayed by the coronavirus pandemic.

Among other provisions, the US law requires that the State Department evaluate Hong Kong’s record on human rights and the rule of law, and mandates sanctions on anyone deemed responsible for the erosion of the city’s ability to preserve its autonomy from China in these areas.

“Given the high level of interest in Hong Kong among people in Washington, and with the extraordinarily high temperature overall in US-China relations, I have to think that the report is going to be reviewed at a very senior level,” said Kurt Tong, who was US consul general to Hong Kong until July 2019.

“And I don't think anyone at a senior level is going to think that the report can’t include statements coming out of the two meetings just because the meetings fall after some arbitrary … deadline,” said Tong, who is now a partner at Washington-based business consultancy The Asia Group.

“The Chinese Communist Party could do what they're committed to do under their obligation to the World Health Organisation to be transparent, to be open, to do the simple things that nations all around the world do to make sure that pandemics like this don't get out of control,” Pompeo said. “This is an ongoing challenge. We still don't have the samples that we need.

Pompeo also said his assertion that there was evidence the pathogen originated in a lab in Wuhan, the Chinese city where the coronavirus began to spread, does not conflict with assessments by other US officials, who have expressed doubts about the theory.

In an interview with National Geographic published on Monday, Dr Anthony Fauci, the top US infectious disease expert, said there was no scientific evidence to support the lab theory, and the chairman of the Joint Chiefs of Staff, General Mark Milley, said on Tuesday that “we don’t know” whether it began in a Chinese laboratory or a wet market. Both officials said scientific evidence indicated that the pathogen was not man-made.

China’s embassy in Washington did not immediately respond to a query about Pompeo’s remarks.

Addressing comments Pompeo made over the weekend on ABC that “the best experts so far seem to think it was man-made”, State Department spokeswoman Morgan Ortagus said on Wednesday that Pompeo had not meant to imply that the virus was man-made.

“But that’s why independent and credible, non-political scientists and doctors need to be able to be given access to the data so that the world can be comfortable that there is a definitive conclusion about the origins of this virus,” she said.

Turning to another issue of contention between Beijing and Washington, Pompeo called on other countries to support Taiwan’s inclusion as an observer in an upcoming World Health Organisation (WHO) meeting.

The UN health agency’s decision-making body, the World Health Assembly (WHA), will hold a meeting on the pandemic through teleconferencing later this month.

“I want to call upon all nations, including those in Europe, to support Taiwan’s participation as an observer at the World Health Assembly and in other relevant United Nations venues,” Pompeo said. “I also call upon WHO director general Tedros to invite Taiwan to observe this month’s WHA, as he has the power to do, and as his predecessors have done on multiple occasions.”

Taiwan was invited to be an observer at the WHA under the name “Chinese Taipei” from 2008 to 2016, when the self-governing island was ruled by the Kuomintang (KMT), which had warmer relations with Beijing than current Taiwanese President Tsai Ing-wen’s Democratic Progressive Party (DPP).

China claims sovereignty over Taiwan under its one-China policy, which the US acknowledged in 1972. That policy gave Beijing a seat at the UN and excluded Taipei.