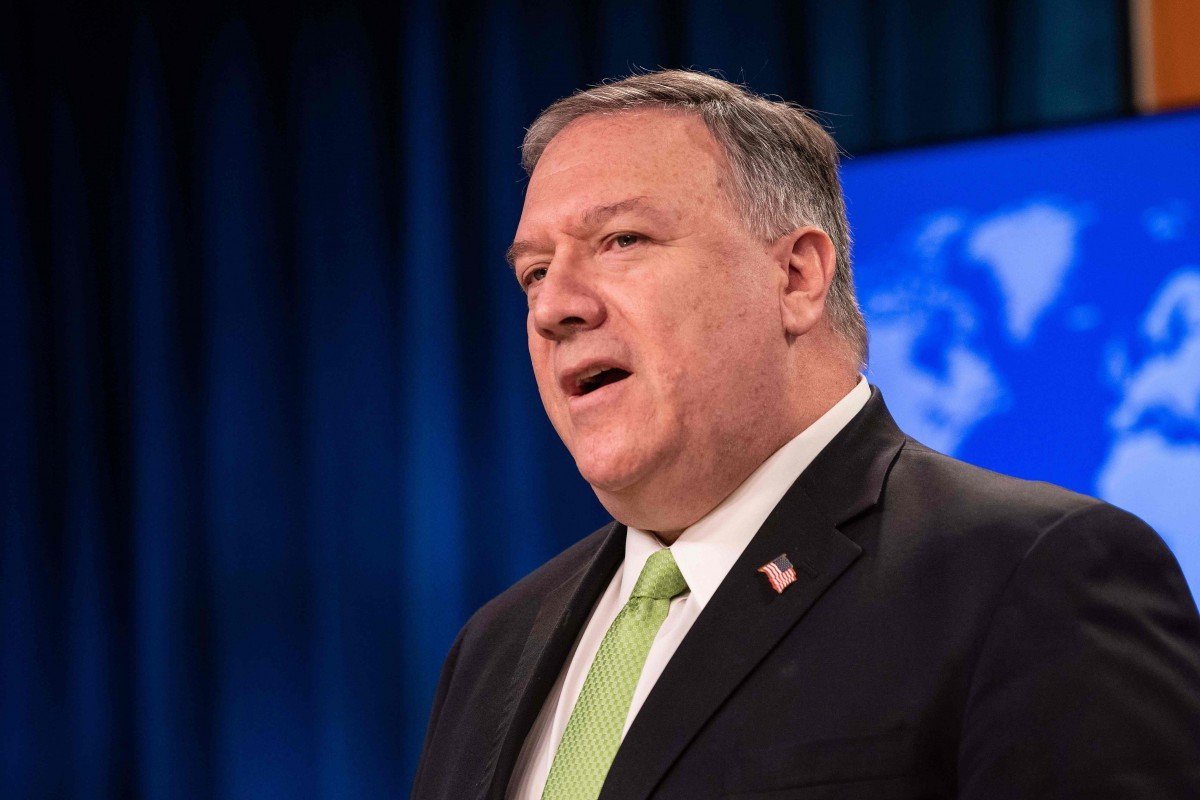 ‘We stand with the people of Hong Kong,’ US secretary of state says in warning mainland leaders against imposing national security law. Pompeo’s agency can sanction people who undermine Hong Kong’s autonomy and is authorised to determine whether the city should retain its special trade status

US Secretary of State Mike Pompeo reiterated a warning to China about Beijing’s plan to pass a new national security law tailor-made for Hong Kong, calling the move “a death knell” for the semi-autonomous city and holding out the threat of sanctions.
“The United States condemns the People’s Republic of China (PRC) National People’s Congress proposal to unilaterally and arbitrarily impose national security legislation on Hong Kong,” Pompeo said on Friday.

“The decision to bypass Hong Kong’s well-established legislative processes and ignore the will of the people of Hong Kong would be a death knell for the high degree of autonomy Beijing promised for Hong Kong under the Sino-British Joint Declaration, a UN-filed agreement,” he said.

Pompeo made his remarks hours after Chinese Premier Li Keqiang announced at the opening of the annual session of the National People’s Congress (NPC) that the legislature’s Standing Committee would “establish sound legal systems and enforcement mechanisms for safeguarding national security” in Hong Kong. Li made no reference to the Basic Law – the city’s mini-constitution – in his report, the first time he has not done so since he took office in 2013.

NPC votes rarely stray from the objectives of Beijing’s senior leadership, all but ensuring that the Standing Committee’s national security legislation – which will be voted on as early as next month – will pass.

The Hong Kong Human Rights and Democracy Act, which became US law in November, gives Pompeo’s agency the authority to sanction individuals deemed responsible for acts undermining Hong Kong’s autonomy from mainland China and to determine whether the city should retain its special trade status.

The State Department must, within six months of the law’s enactment, report on whether the city retains a sufficient degree of autonomy under the “one country, two systems” framework established before sovereignty was transferred back to China from Britain in 1997.

Pompeo said earlier this month that the report was being postponed to allow consideration of any Hong Kong-related policy initiatives announced during the NPC session.

“Any decision impinging on Hong Kong’s autonomy and freedoms as guaranteed under the Sino-British Joint Declaration and the Basic Law would inevitably impact our assessment of one country, two systems and the status of the territory,” Pompeo said on Friday.

“The United States strongly urges Beijing to reconsider its disastrous proposal, abide by its international obligations and respect Hong Kong’s high degree of autonomy, democratic institutions and civil liberties, which are key to preserving its special status under US law,” he said. “We stand with the people of Hong Kong.”

The national security legislation would be the strongest indication yet that Hong Kong was no longer a “special administrative region” of China, the official “SAR” designation that, along with neighbouring Macau, differentiates it from other Chinese cities, said Robert Daly, director of the Wilson Centre’s Kissinger Institute on China and the United States.

“This really does mark the end of Hong Kong as a special administrative region. It is still an AR,” Daly said, adding that the move has “major implications for American companies because they risk losing both the talent pool, as well as the guarantee of independent judiciary and the protection of best practices”.

“The United States government is going to be very torn between wanting to retract Hong Kong special status under law and not wanting to be seen as abandoning the people of Hong Kong,” he said.

Pressure is mounting on US President Donald Trump to weigh in on the matter.

Senator Lindsey Graham of South Carolina, a Republican ally of Trump’s, implored the president in a Twitter post to “put China on notice as to the consequences they would face if they try to end the ‘one country, two systems’ arrangement of autonomy in Hong Kong”.

Every tool in the economic and diplomatic tool box should be used to hold China accountable if they proceed down the path of destroying #HongKong as we know it.
https://t.co/9gxK2N4s3d

The Washington think tank Heritage Foundation, which generally aligns more with the Republican party’s policy objectives than the Democrats, hosted pro-democracy politicians Martin Lee and Dennis Kwok by video link on Friday to discuss Beijing’s move.
The two voiced their concern about the NPC moving ahead with the legislation at a time when much of the rest of the world is distracted by the Covid-19 pandemic.

“They are using Covid-19 as a cover. They are acting now that the world is not watching,” said Kwok. “I would not put it past them to do even more legislating.”

Even before this latest move by Beijing, Hong Kong people were already angry about legislation that would outlaw any disrespect of the national anthem, the pair said.

“I’m very sad to say, I predict there will be huge clashes between people and police next week,” in a repeat of events last year, Kwok said.

“They tried to force through the extradition bill, even when 2 million people came out, even when there’s huge clashes between the police and the protesters. We know what happened after that. The rest is history….It’s like they haven’t learned anything.”

Trump told reporters in Washington on Thursday that he did not know about the substance of the NPC proposal, but vowed to respond “strongly” if Beijing imposed it.

“I don't know what it is because nobody knows yet,” the president said. “If it happens we'll address that issue very strongly.”
Trump did not address the NPC legislation during his public appearances on Friday.

“I’d be at the UN with my UN ambassador and I'd be insisting and calling out, which the United States always had done, an overwhelming violation, not only of an agreement but of human rights,” Biden said in a CNBC interview on Friday.

“Silence on our part has been devastating for people around the world,” Biden said. “All it does is encourage thugs and dictators, which in fact I think the president has some kind of affinity for.”