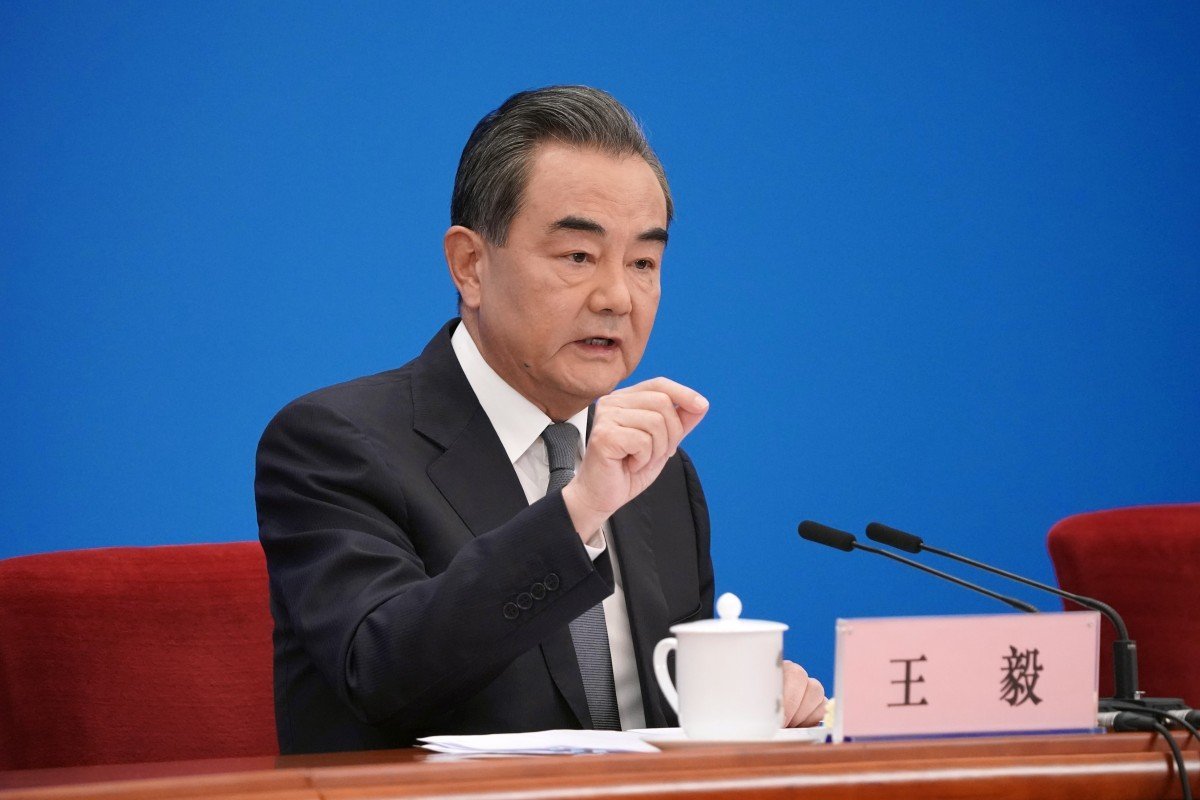 ‘Political virus’ is spreading in US along with Covid-19, says Chinese Foreign Minister Wang Yi

Minister uses annual press conference to reach out to friends and neighbours, but hits out at ‘political forces’ in America that he says are undermining relationship. Despite criticisms of US, Wang insists Washington and Beijing should look for ways to avoid a new cold war

China’s Foreign Minister Wang Yi said on Sunday both China and the United States needed to avoid a new cold war as he blamed ”a political virus” spreading in Washington for their worsening relationship.

Wang Yi made the criticisms in his annual press conference, where he took a warmer tone towards neighbours such as Japan and South Korea, and sought to bolster ties with China’s partners in Asia and Africa

But in spite of his comments about America, Wang also stressed that Beijing and Washington should still look for ways to cooperate and avoid a new cold war.

“Regrettably, not only is the coronavirus sweeping [the world], a political virus is also spreading in the US. This political virus seizes every opportunity to smear China,” he said.

“We need to be alert to efforts by some political forces in America to hijack China-US relations and who try to push the two countries towards a so-called ‘new cold war’.

“This is a dangerous attempt to turn back the course of history,” Wang said on the sidelines of the annual parliamentary meetings known as the ‘two sessions’.

While observers have warned about the risks from deteriorating China-US ties, it’s rare for senior diplomat to openly express concerns about the prospect of another cold war.

Ties between the two countries have further worsened due to escalating tensions over the handling of the Covid-19 pandemic.

Voices calling for decoupling have been on the rise in the United States, with some arguing that the two countries are edging towards a new cold war akin to that against the Soviet Union.

Several top US officials, including President Donald Trump, have accused China of a lack of transparency and criticised its initial reaction to the outbreak.

In April, the state of Missouri said it would sue the Chinese government over its handling of the epidemic and blamed Beijing for the loss of life and economic devastation caused by Covid-19.

When asked about the lawsuit, Wang repeated China’s position that it had done all it could to warn the world about the outbreak as soon as it possibly could, and rejected suggestions that China was to blame.

Evoking the national narrative of a “century of humiliation” – the period between the mid-19th and 20th centuries when China was subjugated by Western and Imperial powers – Wang said China would not allow its sovereignty and dignity to be undermined.

Wang said China did not seek confrontation with the United States, but was determined to protect its sovereignty, territorial integrity and development.

“We urge the United States to understand the highly sensitive nature of the Taiwan issue, to abide by the one China policy … not to test China’s bottom line and not to underestimate the resolve of the 1.4 billion Chinese people in defending national unity,” said Wang.

Wang also used the occasion to shore up support from China’s other partners – praising Japan and South Korea for “setting an example” in their collaboration with Beijing in containing Covid-19, promising more help for Africa and highlighting close ties with Russia.

He said China and Russia would resolutely “oppose unilateral bullying tactics”, and emphasised cooperation with Europe despite their ideological differences.

“There is no fundamental conflict of interest between China and Europe,” he said. “China and Europe are not systemic rivals but strategic cooperative partners.”

He also stressed that China hoped to resume diplomatic engagement with the European Union, including a leaders’ summit and talks on an investment agreement that have been hit by the Covid-19 pandemic.

He also struck back at Washington’s accusations it was exploiting the pandemic to encroach on disputed territories in the South China Sea.

“Such comments are absolute nonsense. The reality is that China has been focused on working with Asean [Association of Southeast Asian Nations] countries to deal with the epidemic.

Our mutual support has led to strengthening of our mutual trust,” he said.

The foreign minister insisted China would resume stalled negotiations over a code of conduct for the South China Sea as soon as possible.

“In contrast, some countries outside the region are flexing their muscles by sending military aircraft and vessels to the South China Sea,” he said.

“Their ill-intentioned and despicable moves are meant to undermine the hard-won stability in the region.”

Despite the criticisms of the US, Wang said the two nations should cooperate on global pandemic controls and policies to deal with the economic impact.

“China has no intention of changing the United States, much less replacing it. The US should give up the wishful thinking that it can change China.”

“For the benefit of the two peoples, as well as the future and well-being of humankind, China and the US should and must find a way to coexist peacefully despite the differences in system and cultures of the two societies.”

But Wang did not address other tensions between China and other countries, including the recent border clash between Indian and Chinese troops and a row with Australia over its calls for an inquiry into the Covid-19 pandemic.

He also failed to say whether President Xi Jinping’s planned state visit to Japan – another casualty of the pandemic – would go ahead later this year.