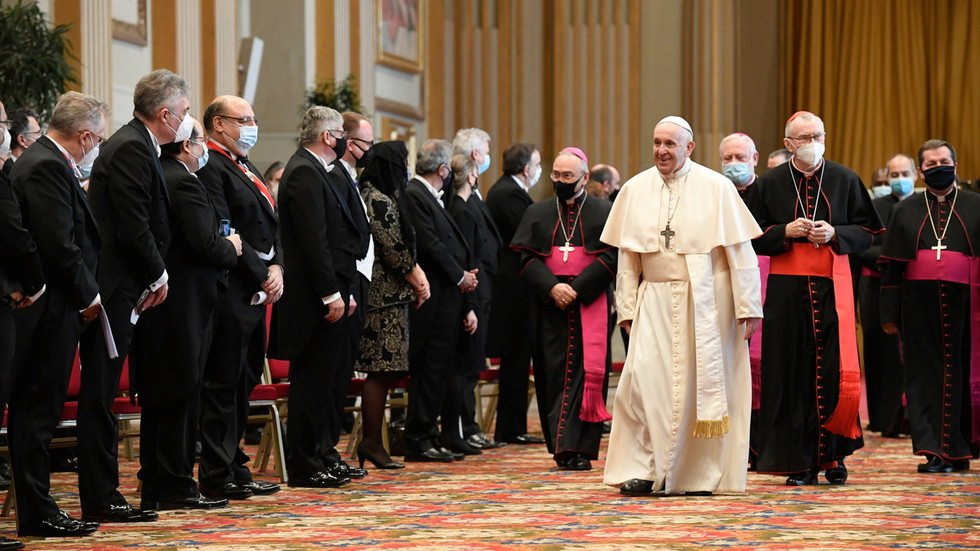 Political ‘personality cults’ are bad for democracy and rule of law, Pope says, citing events of 2020

Pope Francis condemned political cults of personality and said mature democracies must ensure the rule of law prevails over political interests, in what was widely interpreted as a condemnation of populism.

“The development of a democratic consciousness demands that emphasis on individual personalities be overcome and that respect for the rule of law prevail,” the head of the Roman Catholic Church said on Monday, in an annual speech to ambassadors accredited to the Vatican.

“Indeed, law is the indispensable prerequisite for the exercise of all power and must be guaranteed by the responsible governing bodies, regardless of dominant political interests,” he said, according to Reuters.

Events over the past year “in countries with a long democratic tradition” have shown that democracy demands “inclusive, peaceful, constructive and respectful dialogue among all the components of civil society in every city and nation,” he also said.

The pope’s remarks were quickly and widely interpreted as a condemnation of former US President Donald Trump and populism in general.

One of them was from Reuters itself, which included a line about how recent years have seen the rise of populism “in the United States, Latin America and some European countries.”

However, the pope did not name any names or go into the specifics, leaving his words open to interpretation. Populists are hardly the only ones to bend the rules and laws to suit partisan ends or elevate political leaders to cult status rivaling the Vicar of Christ on Earth himself.

Pope Francis’s admonishment against personality cults may sound strange to some since it comes from the person whom Catholic doctrine regards as the supreme authority after God, infallible in matters of religious faith. However, he has not shied away from political pronouncements since ascending to the Holy See in 2013.

Over the past year, the pope has also declared sympathy for open borders, denounced capitalism, endorsed same-sex civil unions, praised Black Lives Matter and championed social justice causes. Most recently, he has condemned the refusal to get vaccinated against Covid-19 as “suicidal denial” – suicide is a sin in Catholicism – and blasted those traveling for the holidays as selfish and uncaring.