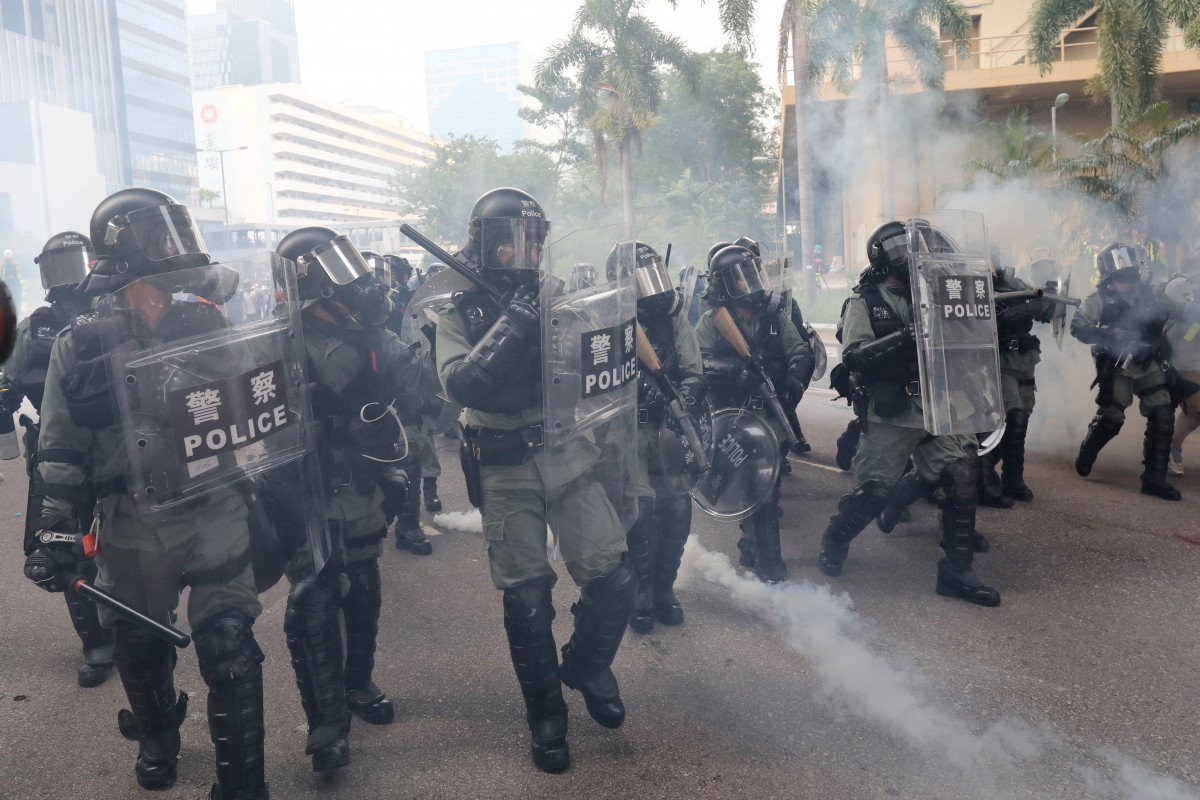 Government adviser also tells seminar in Shenzhen that mobilising PLA troops in the city would not bring an end to ‘one country, two systems’.

Central government advisers on Hong Kong affairs on Saturday said that Beijing had the right to intervene to resolve the crisis in the city and that mobilising PLA troops to do so would not bring an end to the “one country, two systems” agreement.

The remarks were made at a seminar attended by 40 advisers and political heavyweights in Shenzhen, which borders Hong Kong. It was organised by the Chinese Association of Hong Kong and Macau Studies, a semi-official mainland think tank.

Those attending the seminar studied speeches on the city given by former leader Deng Xiaoping, as riot police were using tear gas on protesters
in Hong Kong during a 12th successive weekend of anti-government demonstrations triggered by a now-shelved extradition bill.

Xu Ze, association head and a former deputy director of the Hong Kong and Macau Affairs Office, said that the violence seen during the protests had shaken the fundamental interests of Hong Kong and the nation, and that criminal activities that aimed to destroy constitutional order should not be tolerated.

“This situation we are facing is a decisive war between defending ‘one country, two systems’ or jeopardising it,” he said, referring to the framework under which Hong Kong is part of China but has its own political, legal, economic and financial systems.

“Hong Kong faces the risk of sinking if the current situation continues to spread.”

He said there needed to be better understanding of Hong Kong’s constitutional order – based on China’s constitution and the Basic Law – to resolve the problem. Xu added that Hong Kong should also fully grasp the opportunity for economic development created by the Greater Bay Area
, a scheme to link it with Macau and nine cities in Guangdong in an integrated business hub.
Beijing has escalated its rhetoric on the city in recent weeks, especially after the central government’s liaison office in Hong Kong was vandalised, and has said that violence, especially against the police, was showing “signs of terrorism”
.

Maria Tam Wai-chu, a deputy chairwoman of the Basic Law Committee under the National People’s Congress Standing Committee, said “one country, two systems” and the city’s high level of autonomy did not mean the central government would not intervene.

“Chaos is happening in Hong Kong, and the central government of course can intervene,” she said. “Intervention would be to bring [the city] back to order and get ‘one country, two systems’ on the right track.”

“In addition to being a symbol of China resuming its sovereignty over Hong Kong, the PLA troops in Hong Kong can also stop chaos,” she said.

Lau Siu-kai, vice-chairman of the think tank, said ideally Hong Kong could resolve the crisis itself to prove that it could govern the city and protect national sovereignty.

But he added that even if the central government decided to intervene, it would not mean the end of “one country, two systems” in Hong Kong.

“On the contrary, the central government is fulfilling its duty to the nation and Hong Kong, and ensuring that ‘one country, two systems’ can continue on a steady path without the interference and damage of anti-China forces in Hong Kong,” he said.

The Chinese military has said it can be deployed to Hong Kong to maintain social order at the request of the city’s government, based on the Garrison Law. Paramilitary troops have also been mobilised in Shenzhen in recent weeks – a move seen as sending a warning to the city. But observers say mobilising troops to resolve the crisis would be a last resort for the central government.