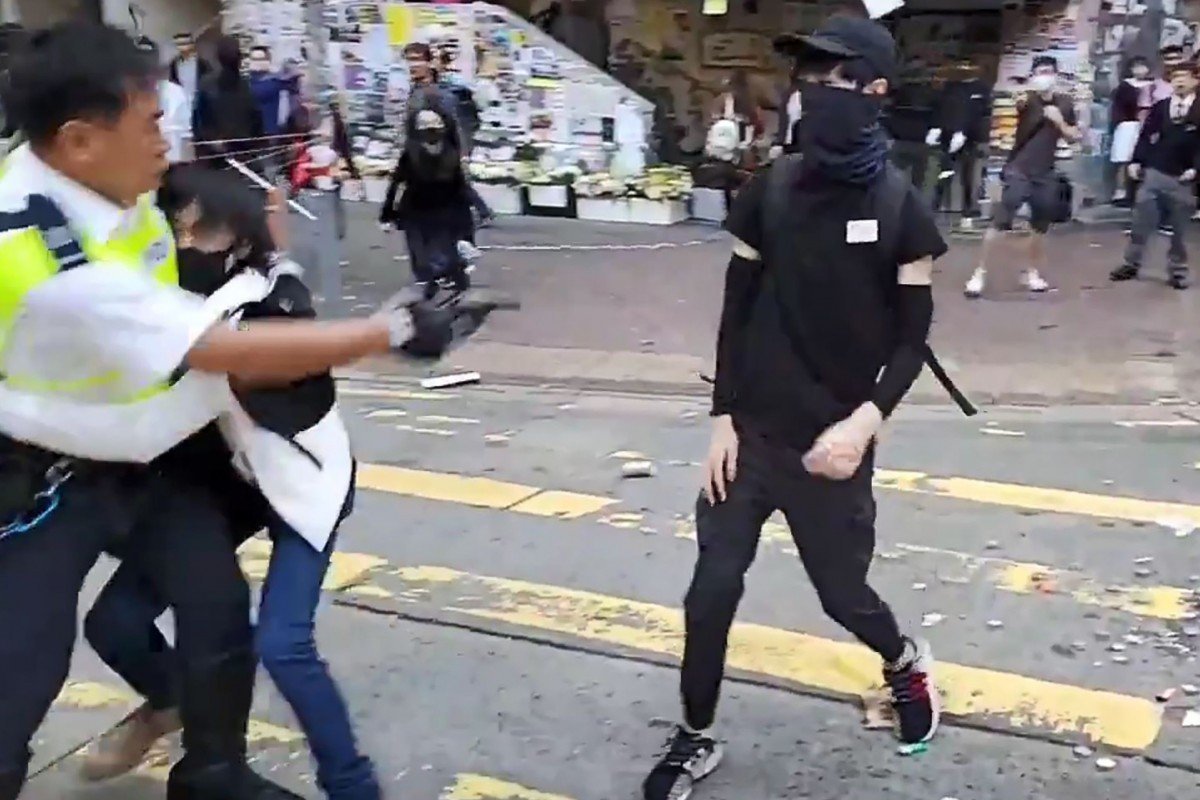 Hong Kong policeman who shot protester did not deviate from guidelines, police say, adding that another officer who moved suspect was ‘unaware of injury’

Force defends officer’s actions and says he is on leave because of injuries, with a more detailed investigation pending. Police do not address questions on why no warning shot was fired

The Hong Kong policeman who shot a student protester in Sai Wan Ho on Monday did not deviate from guidelines, the force has said, adding that another officer who moved the suspect’s body was “unaware of the injury”.

Amid intense citywide clashes as protesters launched their strike action at the start of the week, a station sergeant shot Chow Pak-kwan, 21, in the abdomen at a road crossing following a confrontation.

Video footage showed an unarmed black-clad Chow approaching the officer, surnamed Kwan, who was grappling with another protester in white while pointing a pistol. Police accused Chow of trying to snatch the sergeant’s weapon, prompting him to open fire.

The other protester in white, who was also unarmed, had earlier approached Kwan as the policeman drew his service revolver. Kwan pressed his firearm against the protester’s chest before trying to subdue him.

The Police Public Relations Branch (PPRB) said in a press briefing on Tuesday that after initial investigations, based on the video clip and the testimony of Kwan, they found that the shooting had not deviated from any guidelines.

“Our colleague was facing a group and not one man. Their acts were believed to be targeting the officer’s pistol,” Li Kwai-wah, senior superintendent of the Organised Crime and Triad Bureau said. “Under these conditions, the act of drawing his revolver and even shooting did not deviate from the guidelines – that is to protect himself or others.”

Li said there would be a detailed investigation, and confirmed that Kwan was on leave because he had suffered injuries.
He did not address questions on why Kwan had not fired a warning shot.

According to a police source, Chow, who was sent to hospital in critical condition and had to undergo surgery to remove his right kidney and part of his liver, was arrested for unlawful assembly. His condition had improved by Tuesday.

Another protester Woo Tsz-kin, 19, who was also detained at the scene, was arrested over robbery and possession of offensive weapons.

Senior Superintendent Li dismissed critics’ claims that Chow’s charge was based on inadequate evidence to suggest he had tried to snatch the officer’s gun.

He added that the initial arrest centred on the “most secure” offence that could be laid against the suspect, and that it was not uncommon of police to change the charge at a later stage after advice from the Department of Justice.

Meanwhile, it was confirmed on Tuesday that Kwan had resigned from the chairman of the parent-teacher association of his daughters’ school, following other parents writing to the school to express concerns over his “lack of judgment”.

Kwan was also doxxed and received death threats against his daughters soon after the shooting on Monday.

Online clips circulated showed another officer turning Chow’s body on the ground after the shooting, sparking accusations the move had worsened the protester’s injury. Senior Superintendent Kong Wing-cheung of the PPRB said the Police Tactical Unit officer who moved Chow was “unaware of the injury”.

“We have no intention of worsening any arrested person’s injury,” Kong said. “We were concerned about his injury, but he was an arrestee at the same time. Security concerns were also important. I do not agree that it was inappropriate to move him.”

A source said Chow, who is still in the intensive care unit at Pamela Youde Nethersole Eastern Hospital, was already awake on Tuesday. It was not known when he would be transferred to a general ward.
At the police press conference, Superintendent Fang Chi-kin from the operations wing was asked if he had seen video clips circulating online showing an officer asking colleagues to aim at protesters’ heads when shooting. Fang said he had not viewed the footage.
He added that all officers had undergone “vigorous training” and “should not try to aim at people’s heads”.
Meanwhile, Leung Chi-cheung, the man who was torched during a dispute with protesters in Ma On Shan on Monday, remained in critical condition in the intensive care unit of Prince of Wales Hospital in Sha Tin. A source said he suffered burns on 44 per cent of his body and remained unconscious.