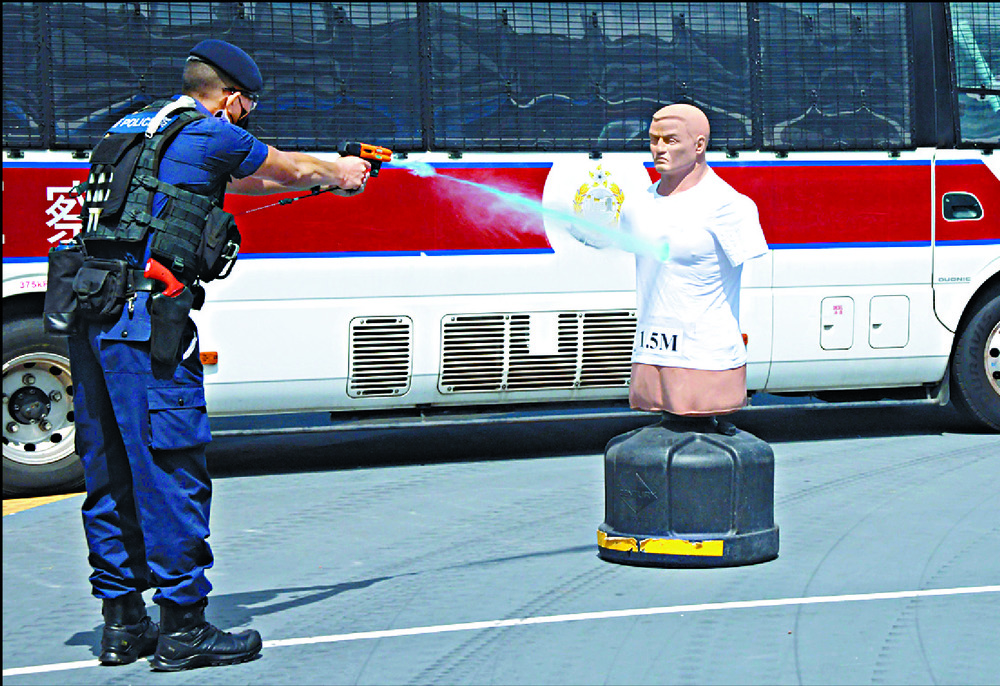 Police Tactical Unit superintendent Yuen Wing-hong said the device was launched in 2020 in the wake of the 2019 social unrest. That period saw ongoing clashes between protesters and police officers involving petrol bombs and tear gas.

The launcher is also designed to reduce the physical impact on targets and enhance enforcement work's efficacy in violent scenes, according to Yuen.

He said the easy-to-carry device, with an orange stock and green projectiles containing pepper solution, is designed to pepper spray targets from close range.

"Each projectile is loaded to fire four rounds of a jet of pepper solution, and the solution can travel as far as 7 meters," he said.

The pepper solution could effectively subdue targets, as it causes irritations and swelling of the skin and the mucous membrane, he said.

"The solution will also cause a burning sensation to skin, mouth and nose, and targets will cough upon inhaling the spray," he said. "These effects will disappear within 30 to 45 minutes."

Yuen said the solution contained blue dye to mark targets for possible arrests. The dye temporarily attaches to the skin, fingernails and clothes. And unlike pepper ball guns - commonly used by officers to counter protesters two years ago - the new device would not cause a physical blow to targets, he said.

"The new device can be aimed at targets more accurately, as it is not easily affected by weather conditions."

Yuen added: "The device can be used both indoors and outdoors." Also, to further mark the device's low lethality, officers would strap the device around their left chest.

Only the Hong Kong Island emergency unit has been provided with the device for now. "We will see whether the device will be distributed to all frontline units when the trial ends," Yuen said.
Add Comment