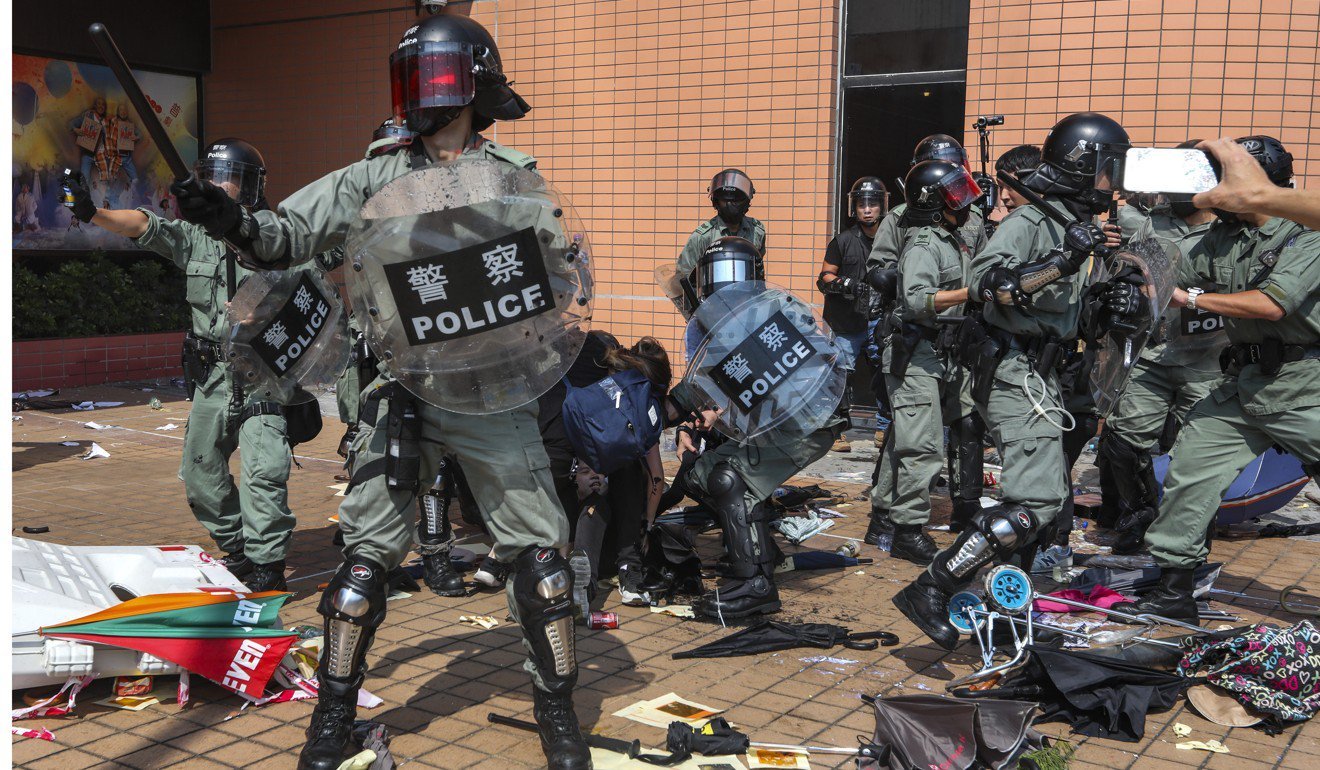 A day after radical anti-government protesters marred China’s National Day celebrations with a violent rampage across Hong Kong, police revealed on Wednesday that they had fired about 1,400 rounds of tear gas, 900 rubber bullets, 190 beanbag rounds and 230 sponge-tipped rounds at them.

The Junior Police Officers’ Association also said the city’s leader, Carrie Lam Cheng Yuet-ngor, had failed to come up with or announce any concrete solutions for the months-long crisis and that the force could not deal with it alone.

It issued a statement hours after officers fired six live rounds, including one that hit an 18-year-old school student in the chest
, on National Day to disperse radicals attacking police. The teenager’s injury was the first from live ammunition since anti-government protests rocked the city in June.

Lam Chi-wai, chairman of the association, which represents 80 per cent of the 31,000-strong force, said in the statement: “What term, other than ‘riot’, can better describe the current situation in Hong Kong?”

He said the government had failed to take any effective measures while police were performing their duties in war zone-like “riots”.

Lam said the force had been braving the “war” since the unrest broke out in June, and officers performed their duties diligently despite all the smears, threats, bullying and attacks against them.

“But we are only an enforcement agency with limited power under the law. In the face of such a massive series of rioting incidents, we cannot work alone without appropriate measures and support from the top level,” the statement said.

According to the association, the city’s leader could introduce a curfew or declare some districts as prohibited areas under the Public Order Ordinance.

The Emergency Regulations Ordinance, a colonial era law introduced in 1922, grants the city’s leader the authority to “make any regulations whatsoever which he [or she] may consider desirable in the public interest” if she considers it an occasion of “emergency or public danger”.

The draconian law allows censorship, arrests, detentions and deportations, the control of ports and all transport, the appropriation of property, and authorises the entry and search of premises.

It was last used in 1967 to quell leftist riots.

Invoking a state of curfew or declaring prohibited areas and relevant measures under the emergency law could “greatly enhance the effectiveness of police to tackle the riots”, Lam said in the statement.

He also demanded officials carry out a full review of the current situation, and give the force full support and protection to restore social order as soon as possible.

Chris Tang Ping-keung, deputy police commissioner (operations), said at a regular briefing on Wednesday afternoon: “One may question if Hong Kong police are still capable of restoring public order. But I must stress that we are well-equipped, confident and determined to bring Hong Kong back on the right track. I must emphasise restoring public order does not only count on police efforts. Everyone in society plays a part.

“We need everyone in Hong Kong to obey the law, not to tolerate violence and to condemn violence. Please work together to bring the city back on the right track.”

On Tuesday, tens of thousands of demonstrators protested in different districts across the city, marring National Day celebrations marking the 70th anniversary of the founding of the People’s Republic of China. Forty-seven MTR stations suspended services and more than 25 shopping centres shut down.

Anti-government protesters engaged in urban guerilla warfare, throwing petrol bombs and projectiles in at least 13 parts of the city. Police responded with water cannons, tear gas, and a total of six live rounds. Police arrested 269 people, aged 12 to 71, for various offences including rioting. Among those arrested were 93 students. In the course of the day, 117 people were taken to hospital, and as of 2pm on Wednesday, five were in a serious condition. Thirty officers were injured.

“Public safety has been jeopardised and the public order of the whole city is being pushed to the verge of a very dangerous situation,” police said in a statement.

“Police reiterate that no violent behaviour will be tolerated. Police will continue to take resolute enforcement action so as to safeguard the city’s public safety and bring all lawbreakers to justice.”

Meanwhile, the government and the force issued separate condemnations on Wednesday morning, with the former describing the unrest as “riots” and police calling those involved “rioters”.

In a joint statement also issued on Wednesday morning, the heads of five other disciplined services – correctional services, customs, fire services, immigration and the Government Flying Service – also gave “the severest condemnation to violence” and pledged full support to the government and police in curbing disorder.

“Recently, violent outbreaks have been escalating in Hong Kong. There have been repeated occurrences of serious crime from fighting … to Mass Transit Railway station and government building vandalism and national flag desecration. The law is trampled on riotously and social order is being disrupted wilfully,” their statement said.

“In the past few months, police have been pressurised, challenged and threatened to an unprecedented degree … The forces will stay united, keep up morale and remain dedicated to do the utmost to stop violence and curb disorder.”
Add Comment