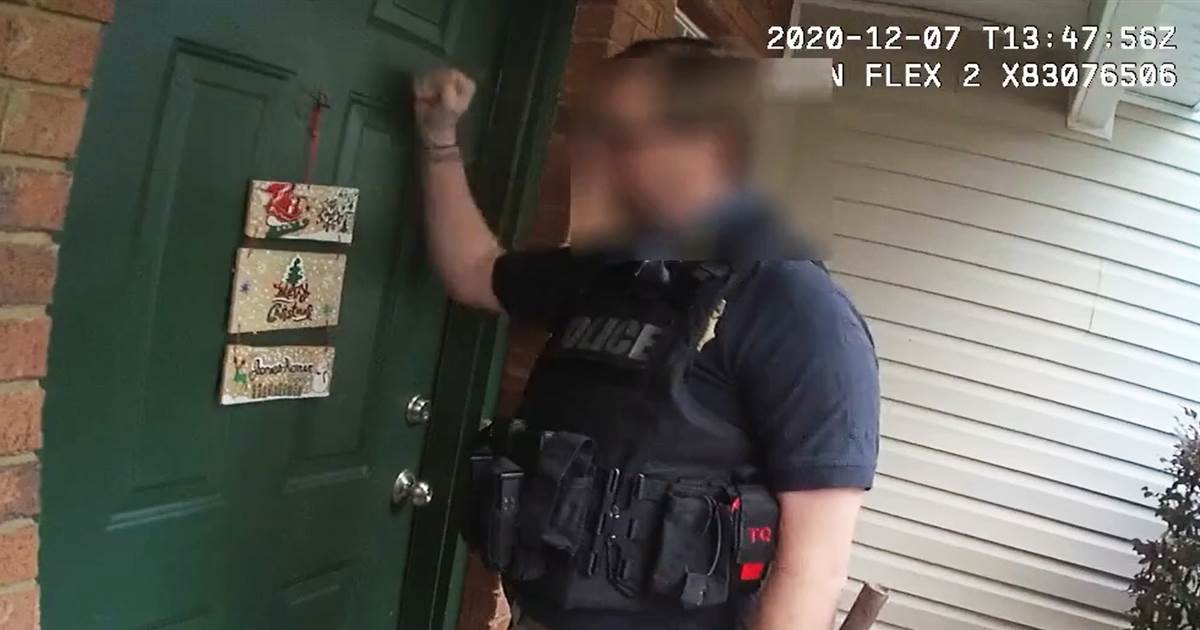 Police body camera video has been released of authorities raiding the home of Rebekah Jones, a Florida scientist who said she was fired for refusing to censor the state's coronavirus data.

The video was released Thursday by the Florida Department of Law Enforcement (FDLE) and blurred by them. It shows a Tallahassee police officer and an FDLE agent approach Jones' home. They ring the doorbell and knock numerous times but no one inside the home answers.

When Jones comes to the door, the officer yells for her to "open the door now" as another agent points his gun in the direction of the home.

"They have a gun out," Jones is heard saying in the video before she opens the door and walks outside with her hands in the air. The agent lowers his gun.

Jones tells authorities that her husband and two children are still in the house.

The video shows Jones asking her husband and children to come downstairs "carefully." Before the footage ends, her family walks out of the house and authorities begin their search of the home.

The agency's video — which blurred the faces of the investigators — comes after Jones posted footage of the raid on her Twitter account, accusing officers of pointing a gun in her face.

"They pointed guns at my kids," she wrote in the post on Monday. The FDLE has said that "at no time were weapons pointed at anyone in the home."

The agency said in its statement Thursday that its agents initially "tried to minimize disruption to the children" and attempted to speak with Jones at the door to explain why they were at the home.

"The situation continued for 23 minutes without cooperation of Ms. Jones, including several phone calls to her," the FDLE said, adding that agents who walked around to the back of the home saw Jones' husband going upstairs.

The agency said it was releasing the footage because the actions of its agents have been "vilified over the past few days regarding the legal search warrant executed at the residence of Ms. Rebekah Jones."

“This video demonstrates that FDLE agents exercised extreme patience," Commissioner Richard Swearingen said in a statement. "Agents afforded Ms. Jones ample time to come to the door and resolve this matter in a civil and professional manner. As this video will demonstrate, any risk or danger to Ms. Jones or her family was the result of her actions."

Swearingen went on to say that he was "proud" of the way agents performed the search warrant and said that Jones should release the entirety of her video.

The agency raided Jones' home in search of computer hardware and electronics after a person at the residence used her email address to illegally gain access to a state-run communications platform, according to a search warrant.

The person also sent a group text on Nov. 10 telling people that it was "time to speak up before another 17,000 people are dead."

Jones, who led the effort to establish a public information portal that listed the numbers of coronavirus deaths and cases in Florida, denied sending the text. She has not been charged with a crime.

"Pretty sure if I was gonna go through the trouble of learning how to hack, then hacking DOH of all places, I'd be damn sure to get the death count right," she said in a message, adding that the accurate death toll on Nov. 10 was 17,460.

She went on to say that the agents seized evidence of "corruption at the state level," and blamed the raid on Gov. Ron DeSantis.

The governor's office said in a statement Friday that the FDLE does not discuss what a search warrant yields with anyone, including DeSantis, and said that authorities did not "raid" Jones' home.

"They executed a lawfully obtained search warrant and did so with patience, professionalism, and reasonable caution," spokesman Fred Piccolo said in part. "For the thousandth time, the Governor did not, in any way, involve himself in the investigation or judicial processes.”

Jones, who was fired from the state's Health Department, told WPEC-TV of West Palm Beach that her exit came after she refused to "manually change data to drum up support for the plan to reopen."

The FDLE said that during its search, electronic devices belonging to Jones' children and husband were forensically examined at the scene and "determined to have no investigative value" so they were not seized.