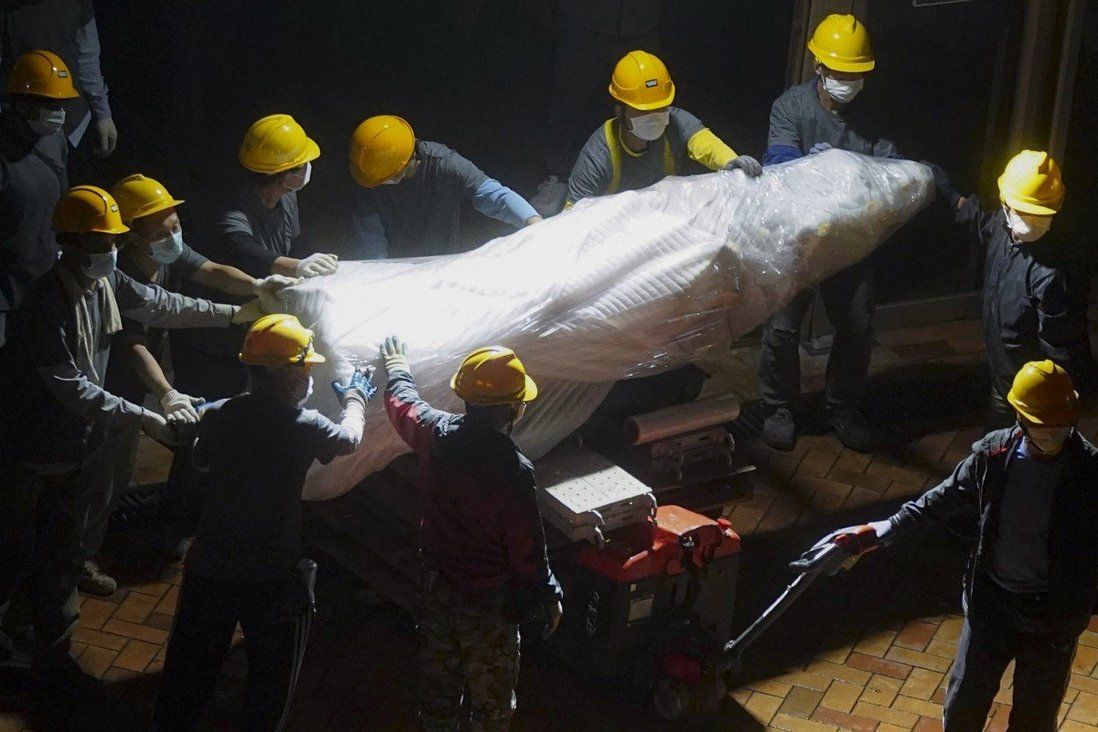 The eight-metre sculpture by Danish artist Jens Galschiøt was surrounded by huge white curtains and plastic hoardings at about 10.30pm.

A sculpture commemorating the victims of the Tiananmen Square crackdown at the University of Hong Kong was dismantled and taken away in the early hours of Thursday morning, two months after campus chiefs ordered its removal.

The HKU Council, a partially government-appointed body, confirmed the removal in a morning statement, saying the decision to take down the eight-metre Pillar of Shame was made based on “external legal advice and risk assessment” after a Wednesday meeting.

“Latest legal advice given to the university cautioned that the continued display of the statue would pose legal risks ... based on the Crimes Ordinance enacted under the Hong Kong colonial government,” the statement reads, without specifying what sections of the ordinance were cause for concern.

The council also said it was “very concerned about the potential safety resulting from the fragile statue” and noted that no official approval had ever been granted for its display. It had stood on campus since June 1997.

The removal comes just days before council chairman Arthur Li Kwok-cheung is to end his term, and follows closely on the heels of the first Legislative Council poll since Beijing revamped the city’s electoral system to ensure only “patriots” hold power.

On Sunday, Li, who along with several other council members was appointed by the city’s chief executive, said the university had faced difficulties in handling the pillar and was still trying to clarify who owned it.

But the statue’s creator, Danish artist Jens Galschiøt, on Thursday called the pillar his “personal property” and said the university, which he accused of “destroying” the sculpture, had ignored his offer to travel to Hong Kong to remove it.

“[The University of Hong Kong] will not talk to me,” he said in a statement. “Countries around the world have offered to receive the Pillar of Shame, and the Danish foreign minister has offered his help – but there has been no response from [HKU] or other responsible authorities.”

“It is my private property and the sculpture belongs to me personally... I will claim compensation for any damage to the sculpture,” he added.

“It is a disgrace and an abuse and shows that Hong Kong has become a brutal place without laws and regulations such as protecting the population, the arts and private property.

“And it’s even more grotesque that they use the Western holiday, Christmas, to carry out the destruction of the artwork.”

The statue was surrounded by huge white curtains and yellow plastic hoardings at about 10.30pm on Wednesday, according to the “Undergrad HKUSU Instant News” Facebook page.

It was then dismantled in parts and wrapped in white cloth at about 3am. The pieces were then placed in a container truck, which left campus at about 6.50am, the HKU student publication’s page reported. 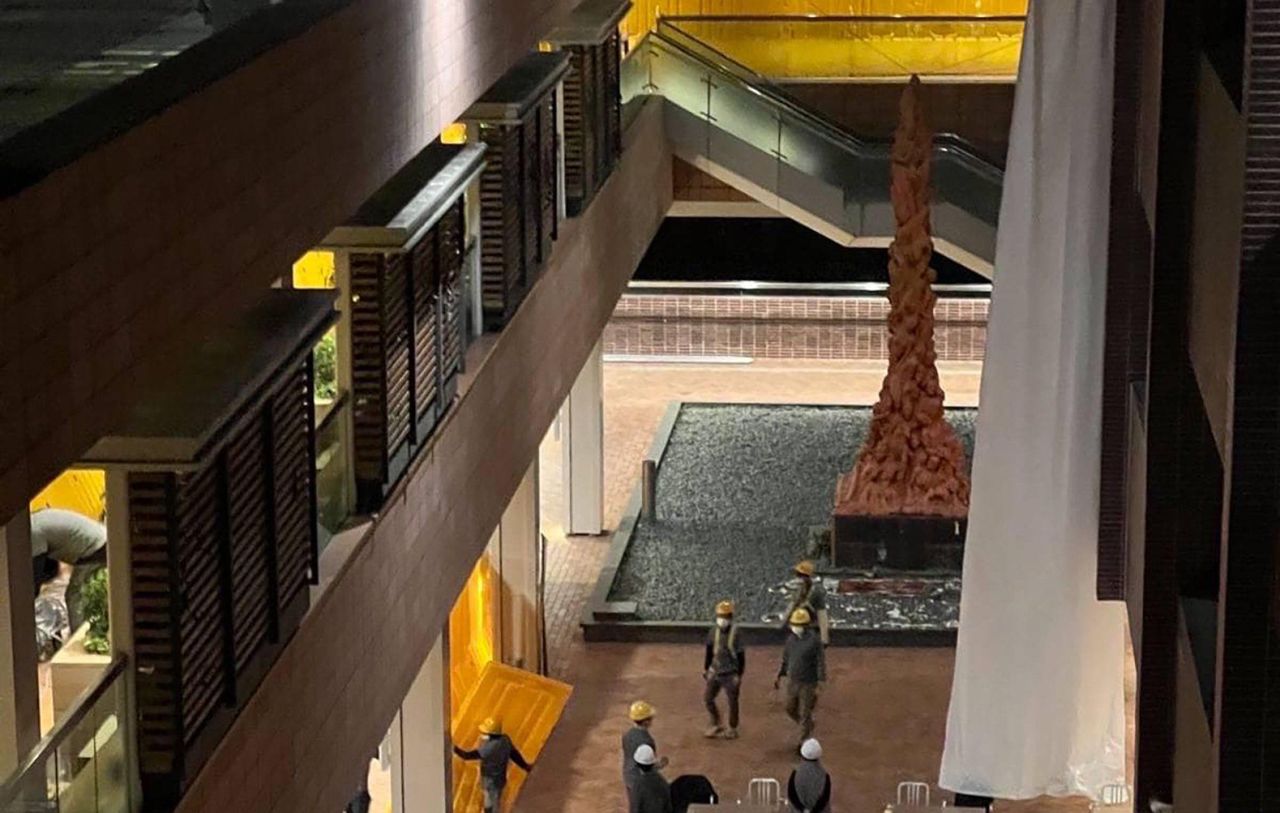 Workers on campus prepare to cover the sculpture.

Workers in safety helmets were seen around the sculpture, while a mobile crane stood by. Shovelling and digging noises could be heard coming from behind the curtains.

About a dozen security guards stopped people from approaching the sealed-off area, but they did not reply to questions on the work being carried out or the reasons for the cordon. When asked if the pillar was being dismantled, one of the guards, however, replied: “Yes, working on it.”

The sculpture is a memorial to the victims of the June 4, 1989 Tiananmen Square crackdown in Beijing.

According to Galschiøt, it was on permanent loan to the now defunct Hong Kong Alliance in Support of Patriotic Democratic Movements of China, the long-time organiser of the June 4 candlelight vigil in the city to mark the crackdown. 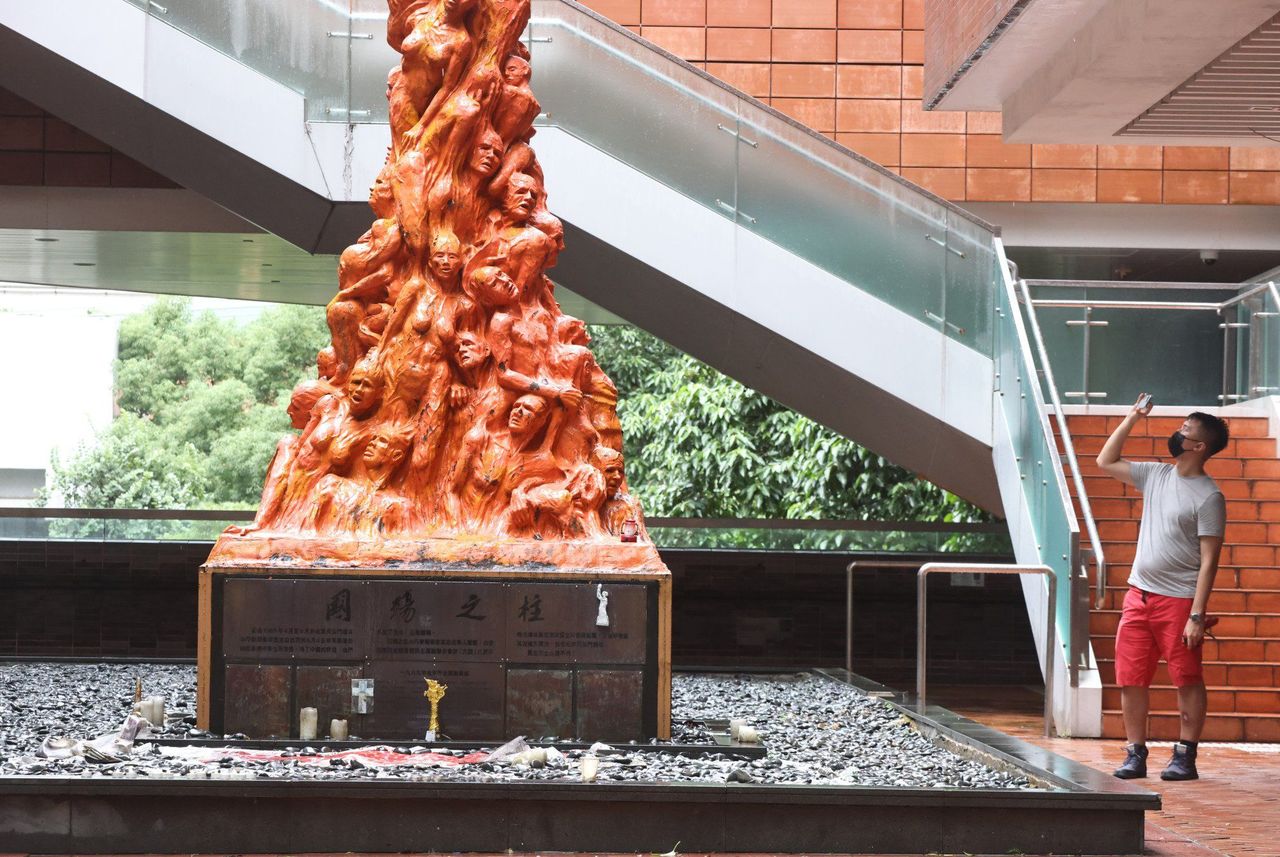 The eight-metre Pillar of Shame sculpture.

HKU ordered the pillar’s removal in October, saying its decision was based on an assessment of legal risks in light of the recent disbandment of the alliance amid a national security investigation.

While the university said the Pillar of Shame was owned by the alliance, Galschiøt argued that the sculpture was only on permanent loan to the group in the absence of any purchase contract and that, in principle, it belonged to him.

Mayer Brown had previously commented on political events, most notably the Black Lives Matter protests in the United States last year. Before it quit in October, the firm was criticised for its role in the removal of the statue.

Galschiøt had accused the firm of “extreme hypocrisy for supporting human rights on one hand, and on the other hand, helping to fight down democracy in Hong Kong by destroying the only memorial of the Tiananmen Square crackdown that exists on Chinese soil”.

HKU had demanded the alliance remove the pillar from its campus by October 13. Earlier this week, Galschiøt had offered to take it to Denmark.