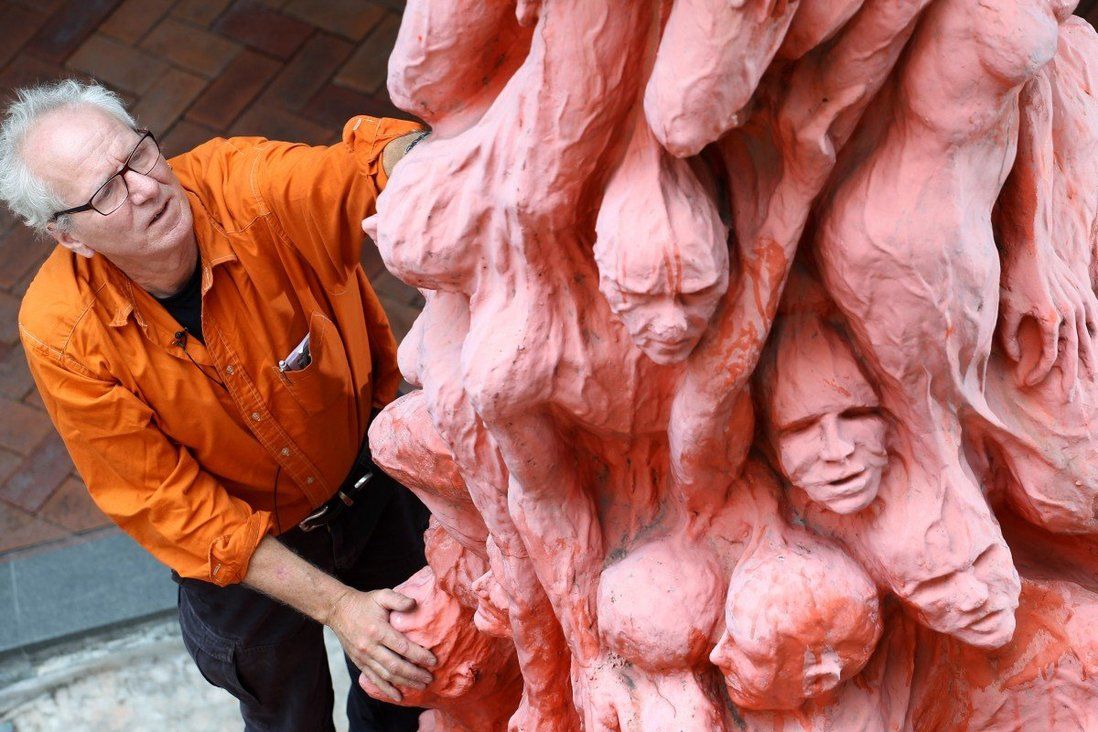 Pillar of Shame: did piece of Hong Kong history die with sculpture’s removal?

Political scientist Ivan Choy says the international community may interpret removal of the pillar as the end of ‘one country, two systems’.

When the Pillar of Shame, a sculpture at the University of Hong Kong (HKU) to remember the victims of the Tiananmen Square crackdown in Beijing, was pulled down in the early hours of Thursday and mummified in bubble wrap, a piece of the city’s history died with it, observers said.

Chinese University (CUHK) political scientist Ivan Choy Chi-keung said the removal of the eight-metre pillar could be interpreted by the international community as the end of “one country, two systems”.

Pointing to Hong Kong’s June 4 Tiananmen vigil, held every year until the Covid-19 pandemic struck, Choy said the event indicated the one country, two systems governing policy – under which the city is granted a high degree of autonomy – had been alive and well.

“No other place in mainland China, or even Macau, could see such large-scale commemorative activities,” he added, suggesting that under the national security law, future June 4 vigils would be banned.

“The Pillar of Shame can be regarded as the last remaining icon of June 4, as well as for one country, two systems.”

He noted that while there would be no more annual campus ritual of washing the HKU sculpture, Hongkongers “would not easily forget June 4, even without the vigil or the statue”.

Apart from the pillar, another important Tiananmen event on the yearly calendar until 2020 had been the candlelight vigil at Victoria Park to honour lives lost in the 1989 crackdown.

The Pillar of Shame was regarded by supporters of the city’s democracy movement as having become imbued with greater meaning, with the vigil banned for the past two years on public health grounds, and with authorities’ tightening their grip on opposition activities.

A gift to Hong Kong from Danish sculptor Jens Galschiøt, the structure arrived in Hong in 1997 and was erected at Victoria Park, on the eighth anniversary of the crackdown. 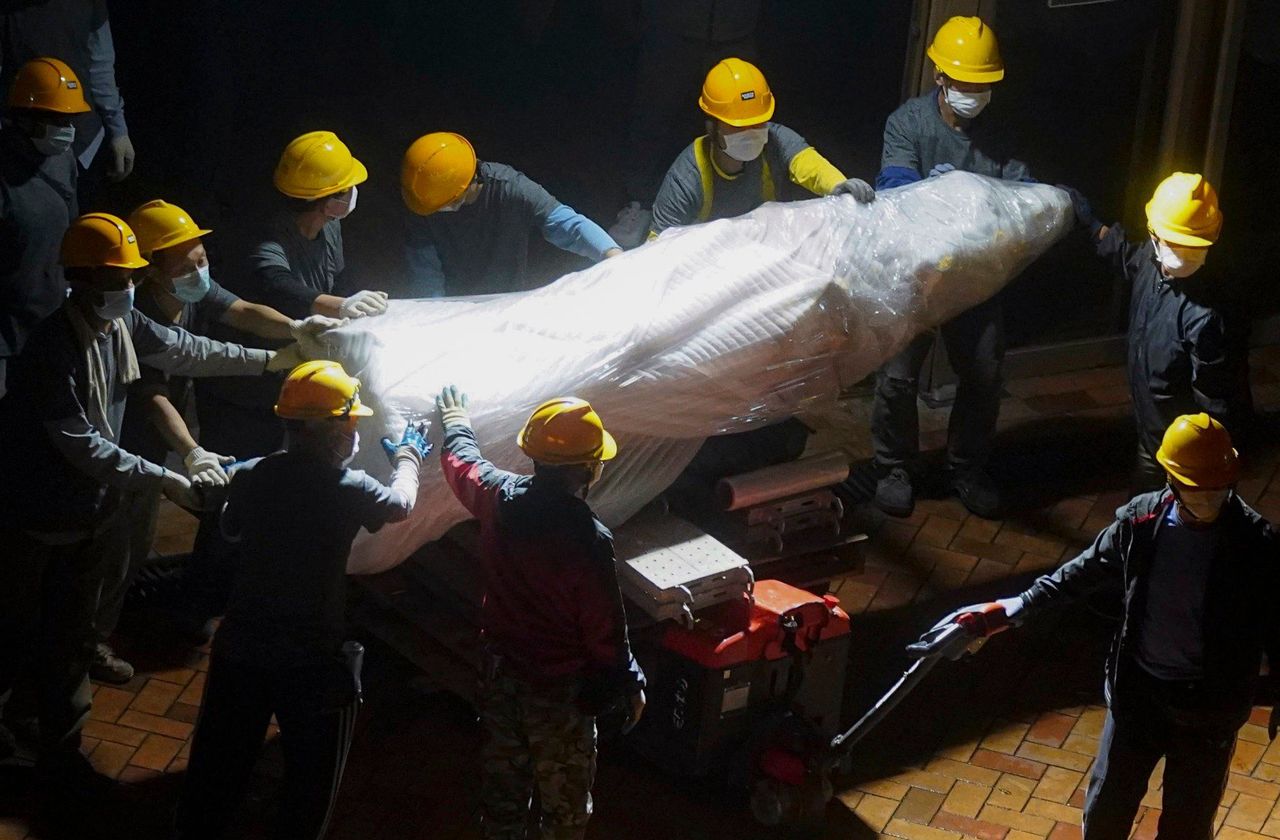 Workers remove a section of the pillar on Thursday morning.

From the onset, it was plagued by controversy over the location of its final resting place. At the end of that evening in 1997, hundreds of students and protesters gathered at HKU to demand they be allowed to erect the sculpture on campus.

Scuffles broke out when students tried to prevent security guards from closing the gates after they were opened briefly to allow a vehicle to pass.

The two-tonne sculpture was meant to stand at the Haking Wong Podium, a square outside the HKU student union building.

But concerns over whether the floor could bear the weight of the sculpture delayed its installation until weeks later. It was then taken to different universities for display the following year, and even stored in a container temporarily.

During that period, at least three university heads said the sculpture could stand on their campuses if students overcame technical difficulties. 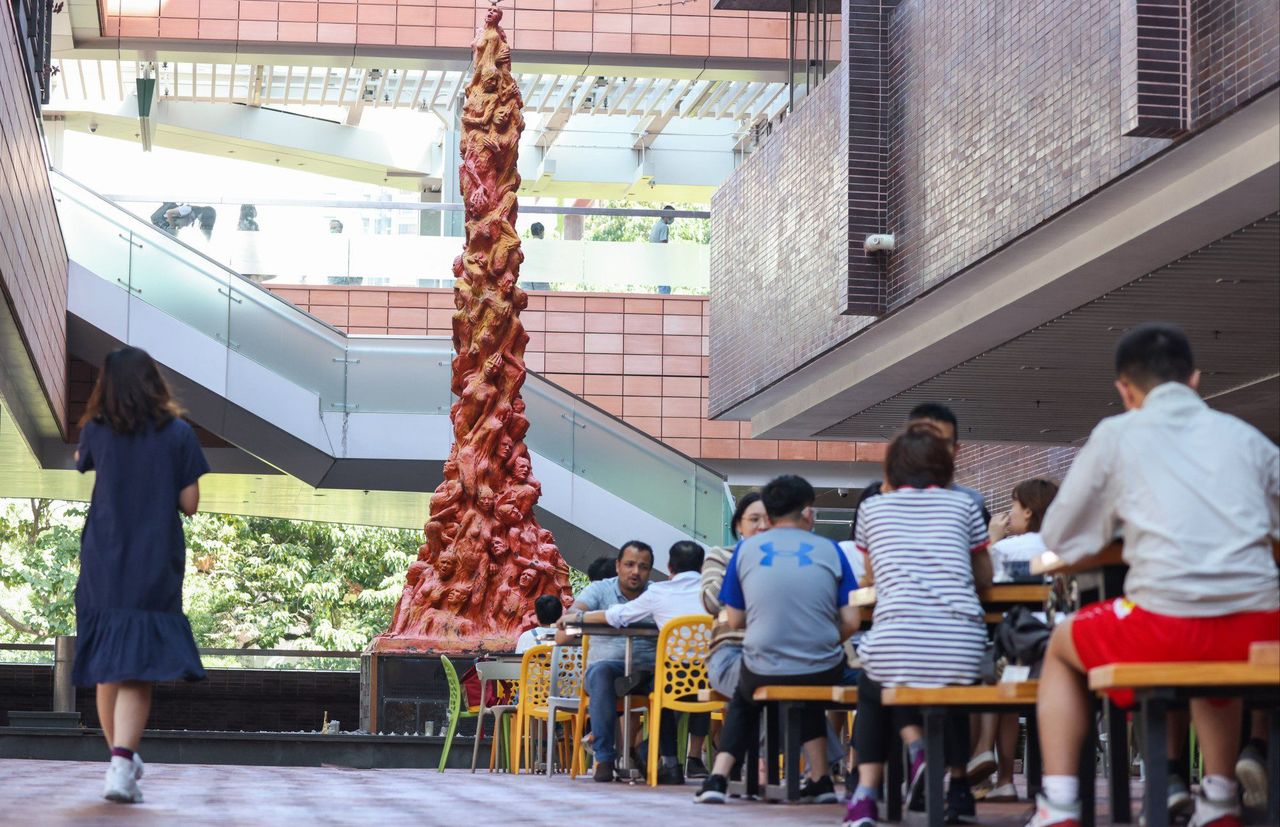 HKU chiefs had threatened to remove the pillar years ago.

Professor Chang Hsin-kang, then president of City University said: “I am quite happy to have this sculpture moving in.”

In 1998, students voted overwhelmingly to have the statue situated at HKU.

To mark the crackdown’s 10th anniversary, the structure was brought to Victoria Park for the candlelight vigil in 1999. At the end of the evening, some 400 protesters and members of the university’s student union returned it to the HKU campus, making it a “permanent” venue without management’s approval.

HKU heads once threatened to remove the pillar, but eventually left it untouched.

Every year in May, HKU’s student union, along with the now-defunct Hong Kong Alliance in Support of Patriotic Democratic Movements of China, organiser of the vigil, would wash the sculpture and hold a silent tribute, with many on campus as well as outsiders attending.

Former union head Charles Kwok Wing-ho in May this year said the cleaning process symbolised protection of the truth and mourning of the fallen in the crackdown.

He said the ritual also commemorated the hard work by former student leaders to get the pillar erected on campus, and the spirit of the union in pursuing the truth, as well as to educate students on the university’s history.

The pillar, depicting a mass of writhing, tortured bodies, was originally in dull grey, made from bronze, copper and concrete. It was painted orange in 2008 as part of a project called “The Color Orange” in a bid to raise awareness on human rights in China by the alliance. A democrat once described the Pillar of Shame as symbolising hope for a democratic China.

After the candlelight vigil was banned this year, some 20 students switched to holding a gathering to mourn Tiananmen Square victims by the statue.

While iconic, the Pillar of Shame is not the only statue of note for pro-democracy activists in Hong Kong. Another structure, called the Goddess of Democracy was displayed in 2010 at Victoria Park and then later transported to CUHK in Sha Tin.

The university’s student union erected the statue on campus and vowed to defend it at all costs. After two weeks of negotiations, management promised the sculpture could stay. 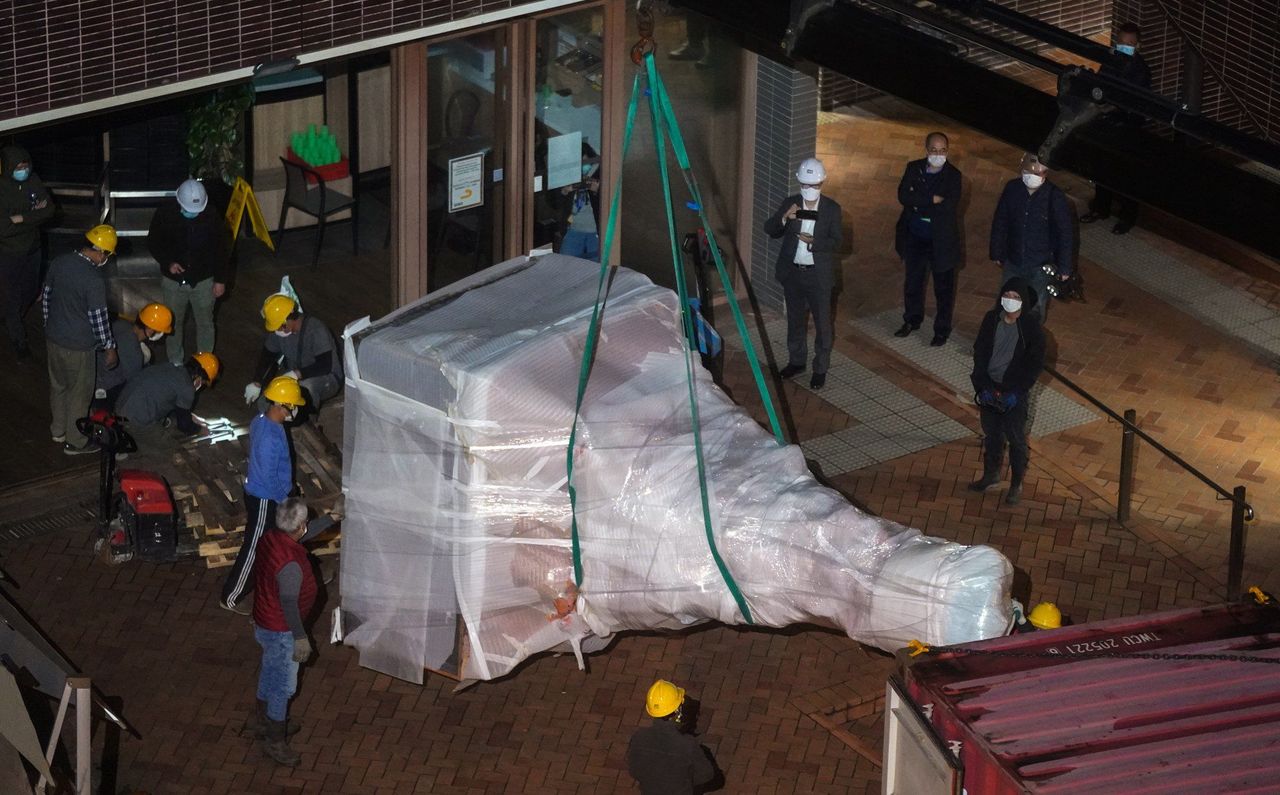 The lower section of the pillar is removed.

In October this year, Pillar of Shame creator Galschiøt sought diplomatic help to relocate the memorial overseas after HKU ordered its removal from campus.

Galschiøt said he did not receive a reply from the Hong Kong government, and protested against its removal on Thursday, describing it as “a disgrace”.

“The pillar, as an icon of June 4, could carry the implication of overthrowing the country. In the past, there might not be a big problem. But after the national security law was introduced, the university might want a reassessment,” he said.

“Who actually owns the statue is not the main issue. It is a simple civil case, and the issue here is that the object is placed inside the university, so the university naturally has the right to handle it.

“Someone can’t just put a big bottle in your home without your consent but demand that you not touch or remove it because it is his or hers, or that you must return it in a way specified.” 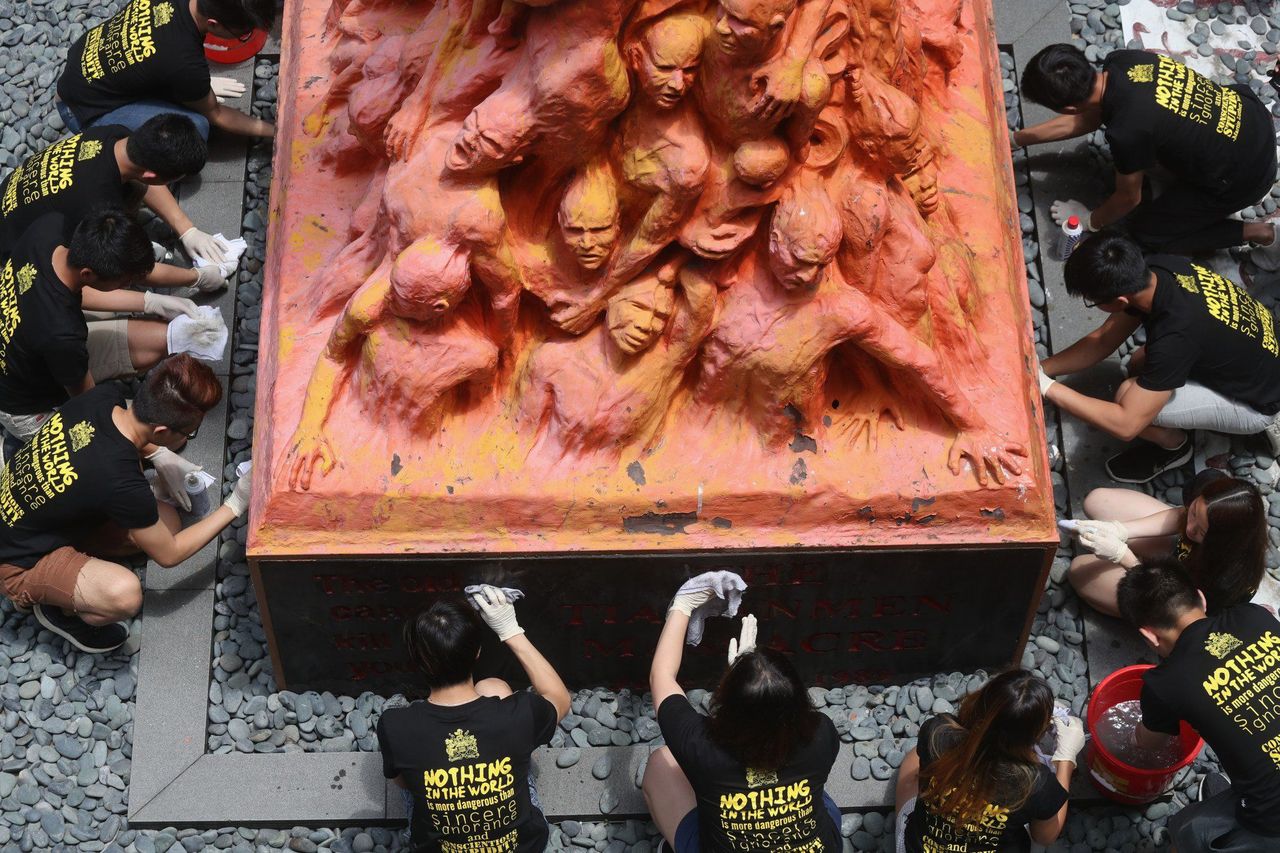 Students clean the Pillar of Shame in a symbolic action

Meanwhile, pro-Beijing heavyweight and HKU alumna Rita Fan Hsu Lai-tai, who called the statue “ugly”, said it should have long been removed. “I don’t care about the political reason. Students should live happy lives on campus, and I doubt they will be happy to see such a sculpture.”

Executive Council member Regina Ip Lau Suk-yee said HKU had the right to decide how to handle the pillar, which she called a “very negative political icon”.

“My understanding is that HKU will not break the statue. It will keep it in storage and return it to the Danish artist at some time in the future,” Ip said.

“I hope all universities in Hong Kong can focus on academic affairs and not get too politicised.”