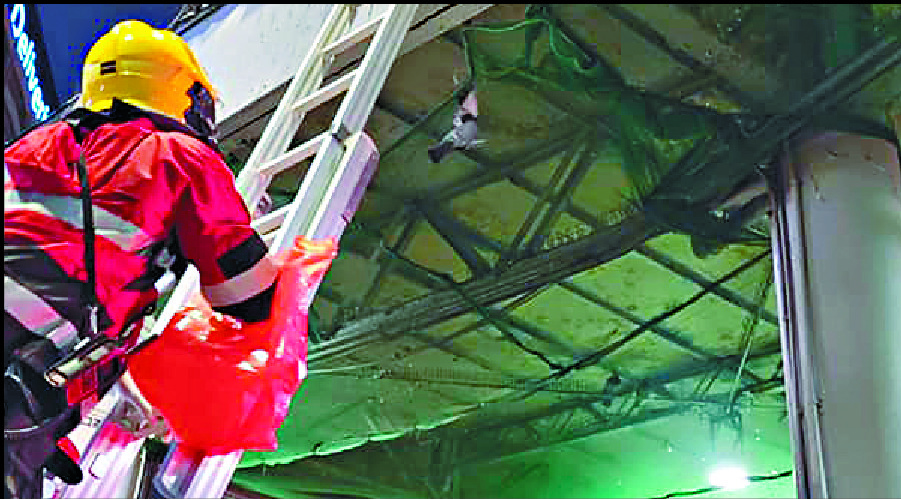 A pigeon concern group has urged authorities to remove nets installed on the overhead covers at the Star Ferry bus terminus as pigeons have been injured or even strangled to death by them.
Around one month ago, authorities installed green nets to stop pigeons from gathering under the cover of the terminus to prevent bird poop from falling onto pedestrians.

Hong Kong Pigeon and Dove Rescue, a rescue group, said in a posting on its Facebook page on Saturday that the net had strangled a pigeon to death.

The group added that the net was ineffective in stopping pigeons from gathering. Pigeons could also get their wings, feet and claws caught up in the net, rendering them unable to escape.

The group wrote on Facebook: "The net is half installed which is causing unnatural and unnecessary death of pigeons. We urge the pier to stop all inhumane treatment and look at effective and humane ways to achieve their goal."

A photo posted to Facebook by the group shows that the green net did not completely seal off the cover of the bus terminus. Several pigeons were able to stand above the green net and under the cover. The group added that the government added bird spikes underneath the bus terminal cover, noting that it is not only ineffective but pigeons have to bear "unnecessary life danger."

It added: "Many foreign groups have stated that bird spikes are inhumane. Birds would fly through the bird spikes to go back to their nest. Birds that are trapped could have their bodies poked through by the spikes."

A petition that was started six days ago called on authorities to remove the net. As of yesterday, the petition has collected 347 signatures. Hong Kong Pigeon and Dove Rescue said that before the petition was launched, it suggested the Agriculture, Fisheries and Conservation Department use more humane measures.

"[The group] has reached out to government officials, providing insight and potential ways in decreasing the population of pigeons in the area whilst minimizing the disturbance of pigeons. Yet, these measures were not taken into consideration," the group wrote.

One of the group's suggestions included building a pigeon house.