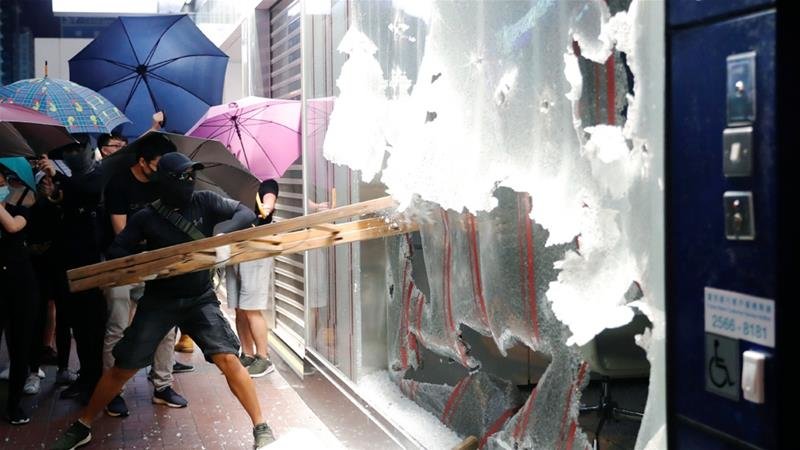 The financial impact of the protests on companies and insurers could run into millions of dollars.

From mum-and-dad retailers to Hong Kong's subway operator, many of the city's businesses that have been vandalised during four months of protests will probably have to pay for repairs out of their own pockets, as few of them are insured against such events, industry insiders say.

Businesses big and small have suffered smashed windows, graffiti and even fire for their perceived support of mainland China by activists concerned that the central government in Beijing is exerting increased control over the special administrative region at the cost of democratic freedoms.

Displaying a banner in support of the police - who protesters have complained of being heavy-handed - was enough to see a small video game shop in western New Territories vandalised four times this month.

"I don't know whether I'll get insurance compensation," said shop owner KK Man. "There's a chance that I won't get compensation because the damage is due to social unrest ... I don't think riot damage is covered."

While businesses flood insurers with claims for such damage, few are likely to be fully compensated as Hong Kong insurance usually protects against events including only fire and natural disasters, such as typhoons.

Hong Kong is a lucrative market for global insurers including American International Group Inc, AXA SA and Zurich Insurance Group AG. As a percentage of gross domestic product - which is the total value of all finished products and services in a country - the value of insurance premiums totals 18.16 percent in the city. Hong Kong is second only to Taiwan in the Asia-Pacific region.

Total insurance premium volume in the territory last year rose 8.3 percent to $66bn, the quickest growth rate in the advanced Asia-Pacific region that includes Australia, Japan and Singapore, a Swiss Re study showed.

Near term, Hong Kong insurers expect a surge in demand for coverage that includes riot damage, though profit is likely to suffer from payouts for event cancellations, a drop in demand for travel insurance and, more generally, economic downturn.

"Overall financial damage from these events will be quite significant and neither insurers nor most of the businesses would have prepared for something like this," said an insurance sector lawyer with a global law firm.

"So you will see a sharp rise in litigation around what's covered and what's not, as well as pressure on earnings of insurance companies because of a surge in claim settlements and a drop in premium income," the lawyer said.

The financial impact of the protests could not be determined with unrest ongoing, but two insurance executives said liabilities for insurers could run into millions of dollars.

The executives and the lawyer declined to be identified due to the sensitivity of the matter.

Anti-government demonstrations have taken place on almost every weekend since June 9. On Sunday, riot police and protesters exchanged tear gas and petrol bombs as an illegal march descended into chaos, with hundreds of shops trashed and Chinese banks and metro stations targeted.

Retailer Best Mart 360 Holdings Ltd on Wednesday said that 59 of its stores had suffered damage during protests as of October 13.

"The group is discussing and handling with its insurance company," it said. "In the event that the insurance company refuses to compensate or inadequately compensates its claims, the group may be required to bear the corresponding economic losses."

Best Mart did not identify its insurer or elaborate on why compensation might be refused. An external spokeswoman for the retailer declined to comment beyond the statement.

Damage to subway stations of operator MTR Corp Ltd may not be fully covered by its insurance, and its inability to recover such costs is likely to weaken its credit profile, credit-rating firm Moody's Investors Service said last week.

"Hong Kong property insurers have been making a profit for 20 years, but following two super typhoons in the past two years, they lost all 20 years worth of profit," said a non-life insurance broker in Hong Kong.

"That's why in 2019 they have been extra prudent in covering property," the broker said. "Luckily there's been no big typhoon this year, but the unlucky thing is there have been riots."