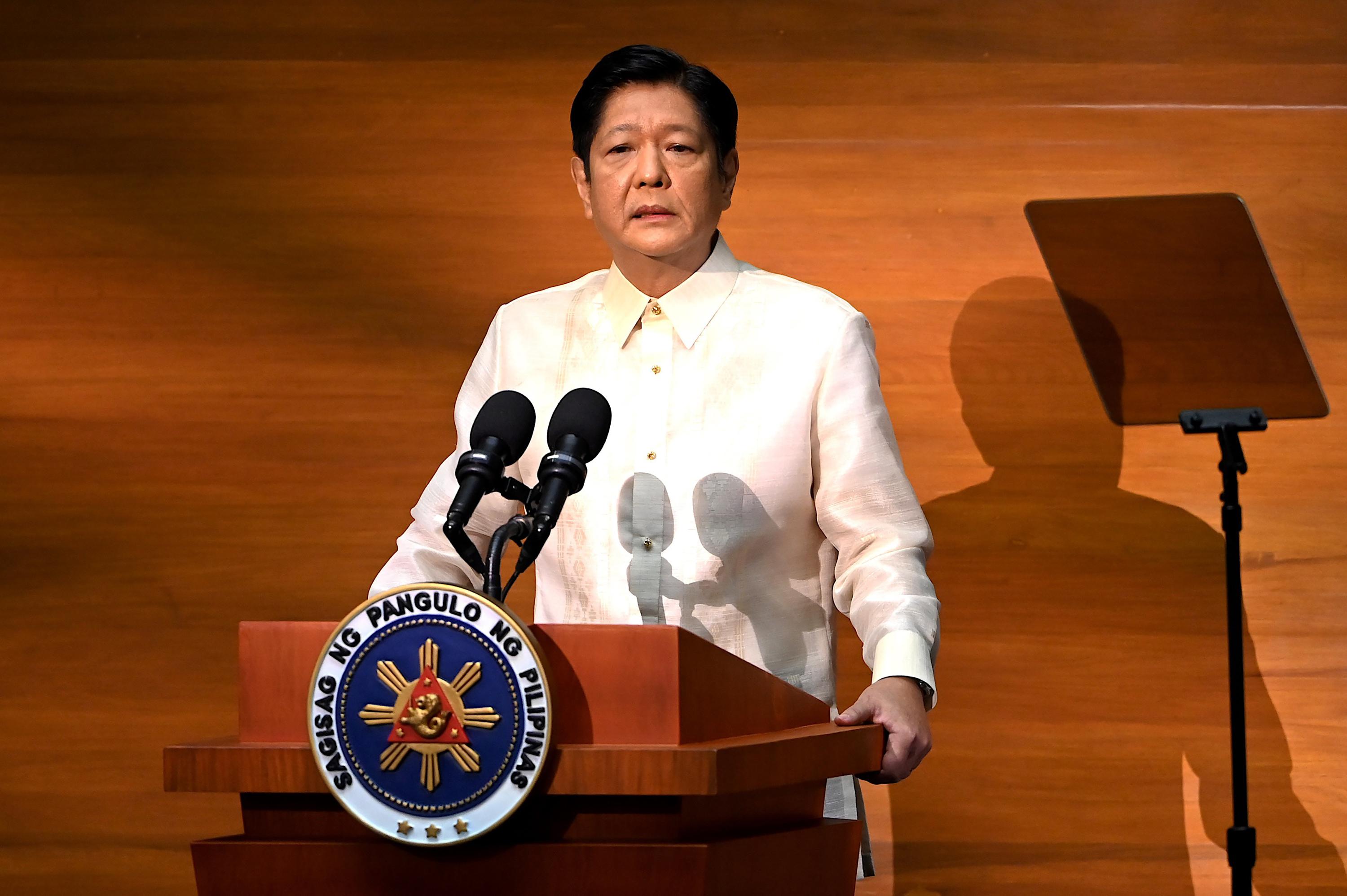 Philippine President Ferdinand Marcos Jr. will deliver his first State of the Nation address Monday with momentum from his landslide election victory, but he’s hamstrung by history as an ousted dictator’s son and daunting economic headwinds.
More than 20,000 policemen, anti-riot contingents and troops were deployed in Metropolitan Manila, where a gun ban has been imposed, to secure the late-afternoon ceremony before a joint session of Congress at the House of Representatives.

About 5,000 flag-waving protesters were allowed to march until noon along a key road away from Congress. They issued a range of demands, from government aid and fuel subsidy amid soaring cost of living to justice for human rights victims under Marcos Jr.’s father, a late dictator who was ousted in a 1986 pro-democracy “People Power” uprising.

They asked Marcos Jr. to outline a clear roadmap out of the economic hardships wrought by two years of coronavirus pandemic lockdowns and the global fallout from Russia’s invasion of Ukraine.

“Marcos Jr. must realize that he is not in the middle of an electoral campaign anymore, where he could get away with refusing to attend debates and lean on empty soundbites and shallow slogans,” the left-wing Akbayan group said. “The people demand clarity of vision and purposiveness of action.”

The president would lay down plans to brace the country for a looming food crisis — which prompted him to decide to temporarily serve as agriculture secretary — and the safe resumption of in-person school classes starting next month, Rodriguez said.

Marcos Jr. received more than 31 million votes of the more than 55 million votes cast in the May 9 election — a stunning political comeback and a massive victory that will provide him political capital as he faces tremendous challenges as well as doubts arising from his father’s reputation. It was the first majority presidential victory in the Philippines in decades.

His allies also strongly dominated both chambers of Congress in the elections, with his cousin, Rep. Martin Romualdez, being elected House speaker and another close ally, Juan Miguel Zubiri, as Senate president on Monday.

With the tremendous domestic issues that he faces coupled with the historical baggage that is hounding him, Marcos Jr. is one of the most challenged leaders in the country’s recent history. His huge electoral mandate could be eroded if people don’t feel any significant relief from their hardships under his rule, University of the Philippines professor Jean Franco said.

“I’m not so sure how long the rest of the 31 million will latch on to Marcos Jr., especially if the economic crisis continues,” Franco said, adding the new president did not have the tough and populist image that kept the ratings of his predecessor, Rodrigo Duterte, high.

Marcos Jr.’s father was toppled by a largely peaceful “People Power” revolt in 1986 and died in 1989 while in exile in Hawaii without admitting any wrongdoing, including accusations that he, his family and associates amassed an estimated $5 billion to $10 billion while in office.

A Hawaii court later found the elder Marcos liable for human rights violations and awarded $2 billion to more than 9,000 Filipinos who filed a lawsuit against him for torture, incarceration, extrajudicial killings and disappearances.

But Marcos Jr., a former governor, congressman and senator, has refused to acknowledge the massive human rights abuses and corruption that marked his father’s strongman rule.

The Philippines has been among the countries worst-hit in Asia by the two-year pandemic after more than 60,000 deaths and extended lockdowns sent the economy to its worst recession in 2020 since World War II and worsened poverty, unemployment, hunger and the country’s indebtedness.