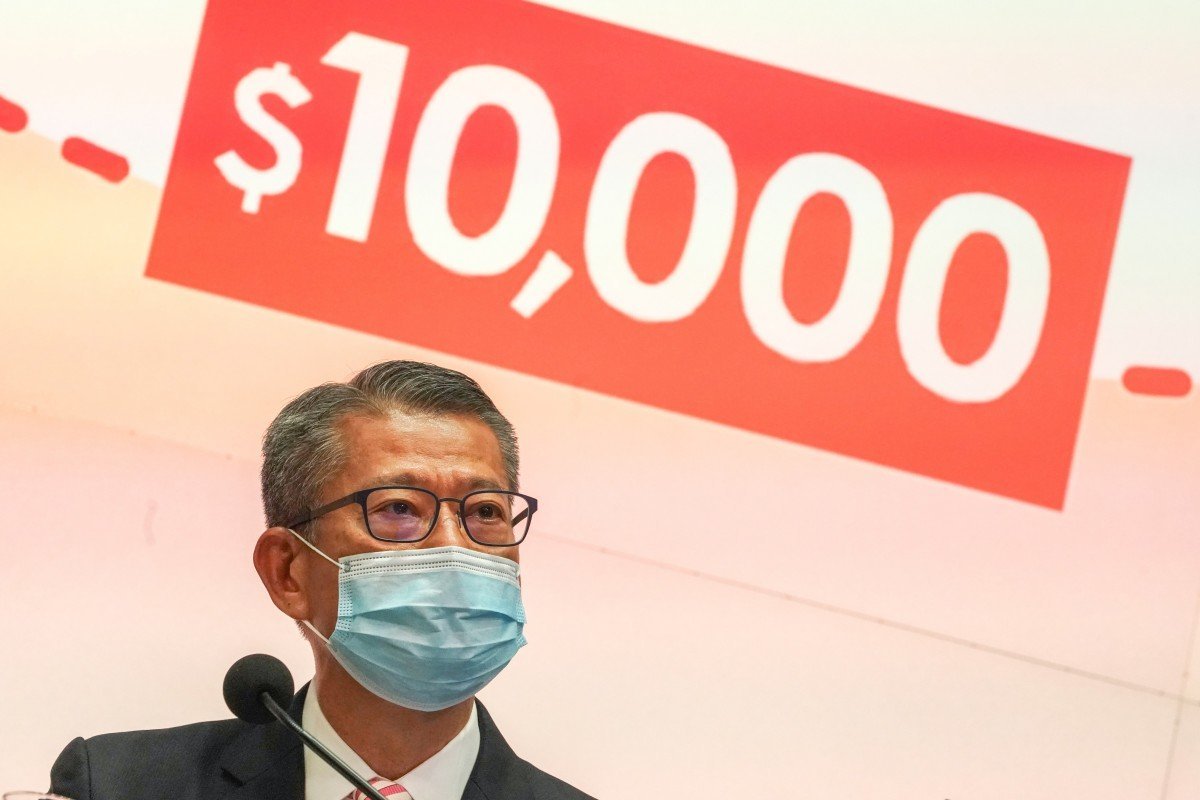 Applications can be made from June 21 with city’s banks signing on to help distribute funds. Giveaway was outlined in budget and hope is residents will spend money to boost economy

Eligible Hong Kong permanent residents will be able to apply for the government’s HK$10,000 (US$1,290) cash handout from June 21 with the first payments to be made as early as July 8, Financial Secretary Paul Chan Mo-po announced on Monday.
The scheme, which is available to adult Hongkongers, will be open until the end of next year so people who do not turn 18 until then can still apply.

“The quickest way to get paid is through electronic registration with banks,” Chan said. “I hope people will spend the cash to boost the economy.”

Chan said the government would “keep an open mind” on launching a fresh round of cash handouts to help a public hit hard by the coronavirus pandemic and economic downturn.

Chan unveiled the HK$71 billion handout in his budget speech in February, which could benefit about 7 million people and help ease their financial burden during the recession.

The payment is expected to be made in July, and Chan said most eligible residents should have received the money by the end of August.

Eligible people can choose to register through their bank’s website or online banking services starting from June 21, providing the first 4 digits of their ID card, local contact number and bank account number. Payment will then be deposited into the account beginning July 8.

Alternatively, people can submit a paper registration to their bank or to the post office. Forms can be downloaded from the websites of participating banks or collected from post office branches and public housing estate offices.

It is expected to normally take two weeks for the registrants to receive payment through their bank account or by cheque.

The government said any personal information used in the registration process would only be kept and used for future similar handout schemes.

“We will set out clearly in the registration form, saying the personal data we collected for this scheme will also be used for similar schemes in the future,” Jessie Wong, from the Financial Secretary’s Office, said.

To encourage spending, Chan said the food and drink sector in the city would offer perks.

He said the administration fees involved in the cash handout would be smaller than expected at HK$500 million, about half of the government’s previous estimate of HK$1 billion.

Asked whether the government was considering a second round of handouts, Chan said he would not rule it out, but there were lots of factors to consider.

“We keep an open mind as to whether to do another round of cash handouts,” he said. “We are monitoring the situation closely, but I would reiterate that to deal with the economic challenges and to relieve the pressure of the public, we need to have a combination of measures.”

Pointing to the fact the government had rolled out other schemes, such as tax rebates and subsidies for hard-hit industries, he said cash handouts were “just one of these measures”.

“All in all, the total amount of different measures come to about HK$290 billion, which is quite a lot,” he said. “In the coming financial year, we are expecting a very high deficit, close to HK$280 billion or more, so we have to be very careful [about how we spend public money].”