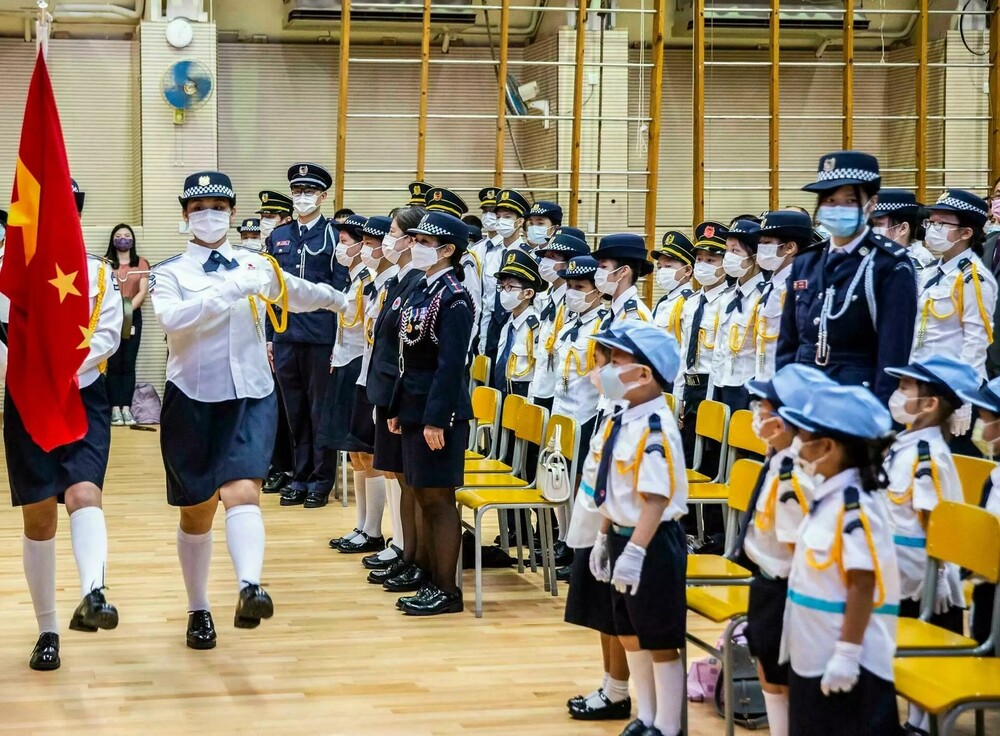 Hong Kong teenager Sum says he lives a double life. In school he presents as a dutiful student, happy to learn a new "patriotic" curriculum and stand to attention at the now regular flag-raising ceremonies he must attend.
But when class ends the 16-year-old often heads to the courts to support friends being prosecuted for national security offences.

"I can pretend to be a loyal patriot," he told AFP after one recent hearing. "But I will also guard my heart by building both my body and my mind."

Sum's friends are part of a group of seven -- including four minors -- who were charged earlier this year with "inciting subversion" after authorities said they were discovered in possession of explosives and materials with pro-independence slogans.

The group includes a 15-year-old girl, the youngest person to be charged under a national security law that Beijing imposed on Hong Kong after huge and often violent democracy protests swept the city two years ago.

Youngsters played a key role in those protests, as well as earlier democracy rallies in 2014 and 2012.

Of the more than 10,000 people arrested during the 2019 unrest, nearly 40 percent were students. Over 1,100 students have since been prosecuted, many of them serving time.

Beijing has dismissed the democracy movement, portraying it as an insidious "foreign plot" to destroy China, and says a lack of patriotic education allowed Hong Kongers to be misled and radicalized.

China has since moved to incubate loyalty within Hong Kong's 960,000 students, part of a wider campaign to remold the once outspoken city in the authoritarian mainland's image and root out dissent.

"Students educated in Hong Kong must not turn into individuals who only have a Chinese face but do not carry a Chinese heart," senior Chinese official Tan Tieniu said in a speech earlier this year on education reform.

Hong Kong authorities have rolled out new curriculums for students aged six to 18 to teach them about the four new national security crimes -- subversion, secession, terrorism, and collusion with foreign forces.

One explainer video released by the Education Bureau earlier this year featured a cartoon owl.

Authorities are also reforming the curriculum for "Liberal Studies" -- a class that government loyalists partly blamed for the protests -- and have renamed it "Citizenship and Social Development".

Hong Kong's universities have been ordered to prepare their own national security courses.

Two of them, Baptist University and Hong Kong Polytechnic University, have made the courses a graduation requirement.

Mary, a 19-year-old Baptist student, said she recently attended a two-hour compulsory lecture given by a barrister who flew through a 260-page presentation filled with dense legalese copied from government documents and court judgements.

Students were told that any more than a 15-minute absence from the lecture would count as non-attendance.

She then had to pass a national security quiz within 21 days in order to graduate but repeatedly failed.

"I was given different questions every day and I was never told what mistakes I made every time I failed the quiz," she told AFP, asking for her last name not to be used.

One of the questions on the test, which AFP has seen, asked students whether a fictional character called "Mr. Breach" had committed an offence under the national security law by holding a banner that read: "Let's end the reign of the single party".

They had to guess 15 out of 20 multiple choice questions correctly to pass, which Mary eventually did.

The University of Hong Kong, the city's oldest, has yet to introduce its national security course but students describe a new culture of academic fear on campus.

"I would say resentment is simmering inside, but we dare not speak out," Zack, a first-year HKU student, told AFP.

"Many, many people have been arrested. The purge is really effective," he said, referring to dozens of democracy figures charged with national security crimes over the last year.

Multiple universities, including HKU, have severed ties with their student unions who were vocally supportive of the democracy movement.

Zack said he used to organize student concern groups in secondary schools during the 2019 protests.

He has since distanced himself from political activities and even stopped watching news.

"My last hope is that the next generation can still tell wrong from right," he said.

"But honestly I can do nothing to help them. I won't have any children as long as I have to live in Hong Kong."
Add Comment