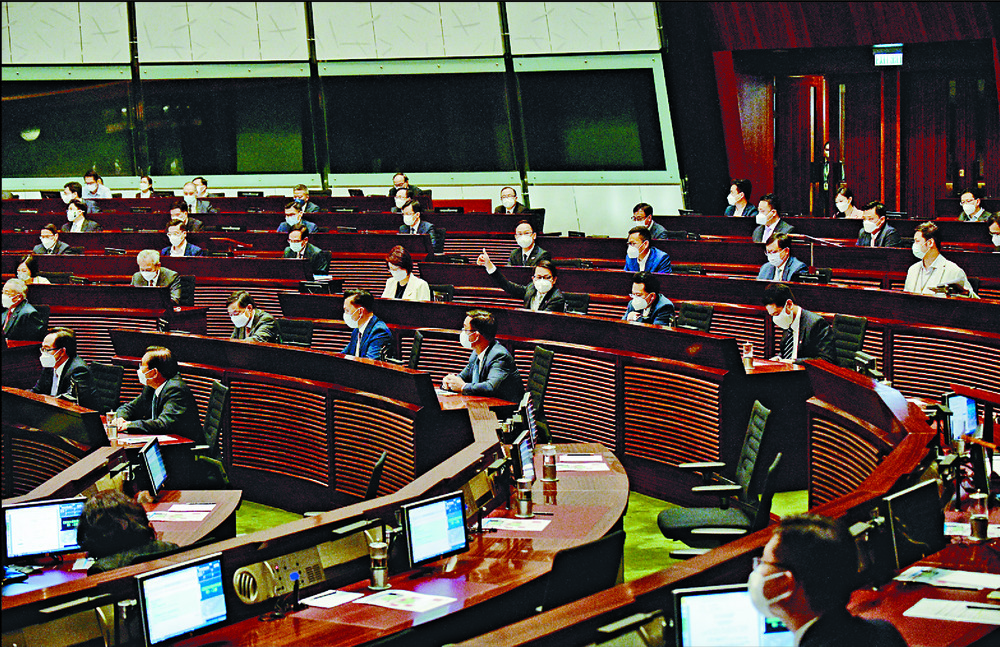 The Legislative Council has voted predictably in support of the budget, with 87 members in favor and just one abstaining, since becoming a "patriots only" legislature.
The only abstention was from social welfare sector lawmaker Tik Chi-yuen of the Third Side, who said he could not accept the government's move to continue to cut expenditure on the social welfare sector.

It took lawmakers less than two hours to pass the budget after the resumption of the second reading in the morning.

But right after the budget passed its second reading, a woman surnamed Jinn, 63, sat in the public gallery, started yelling slogans. What she was trying to say was unclear but phrases like "political persecution" and "unable to get consumption vouchers" could be heard.

She also threw pieces of paper in the direction of Legco members and was eventually removed before the meeting was able to proceed.

She was arrested for common assault later yesterday after Legco security guards called the police. She allegedly injured a 56-year-old female security guard's shoulder during the struggle.

Financial Secretary Paul Chan Mo-po said the government will put its best foot forward to implement measures proposed in the budget, including the second round of HK$5,000 consumption vouchers.

"The government is now organizing the second phase distribution of the consumption voucher - our target is to start accepting registrations by around next month and begin distributing during the summer holidays," Chan said.

"I can recall drawing fire when I announced a cash handout of HK$4,000 in 2018, up until which time I found many people were living in abysmal conditions. I therefore found distributing consumption vouchers can really bring them financial relief," he added.

Chan also said the economy has taken a hard hit due to the fifth Covid-19 wave, due to which Hong Kong has experienced deflation by 4 percent compared to last year.

The unemployment rate has also increased to 5 percent, which shows that the labor market is also under great pressure, he added.

"As the pandemic starts to subside, the local economy will start bouncing back, but it still depends on the impact caused by external factors," Chan said.

Acting Secretary for Commerce and Economic Development Bernard Chan Pak-li said things are looking up with the reopening of some tourism facilities with the first phase of the relaxation of social distancing measures on April 21.