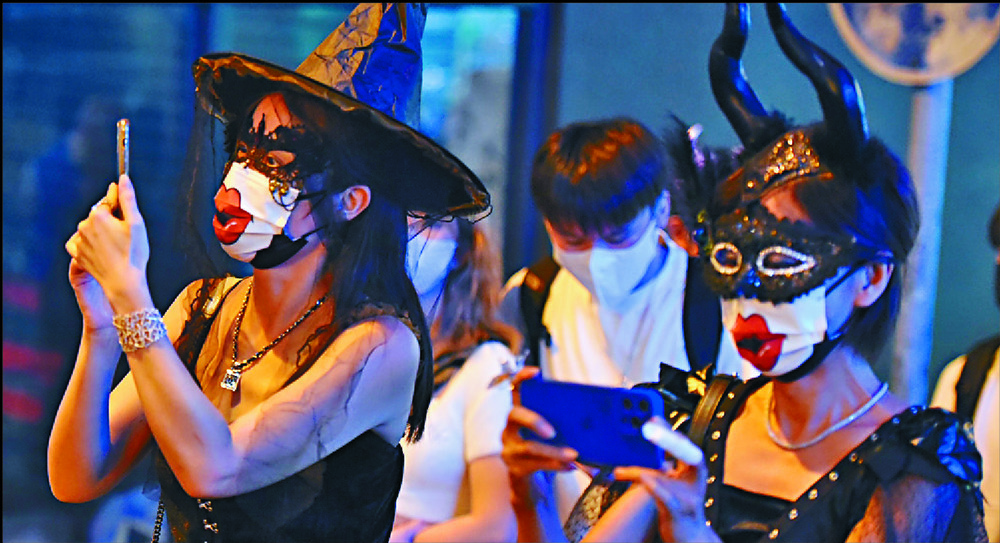 Tens of thousands of party-goers are expected to creep into Lan Kwai Fong on Halloween, as crowds of revelers, all decked out in costumes, were spotted streaming into its alleyways in Lan Kwai Fong early last night.
Many got into the spooky spirit and were dressed up as movie and anime characters, with some children in the iconic green tracksuit and red jumpsuits from last year's Netflix viral series Squid Game.

Some also dressed up as rapid Covid test kits and brought along pets.

A reveler, Chan, said the crowd control measures were smooth.

Asked whether the Seoul stampede had her worried, Chan said she decided to leave Lan Kwai Fong earlier to avoid the huge crowds.

Another, Joey, found there were fewer people in the night district compared to previous years.

"I did see officers controlling the crowds, dividing people into groups and only letting a new group come in when a group had left," she said.

Emergency access and a first-aid station have also been set up, she said..

"We could see that on Monday midnight, even though people needed to go to work or attend classes in the morning, many youngsters came to Lan Kwai Fong in teams, and dressed up in different Halloween costumes," Cheung said.

"I think the crowd at night will be of the same size as Sunday night since it's a Tuesday and people still need to work the next morning," she said.

Restaurants and bars welcome the lifting of dine-in hour restrictions from Thursday, with taverns toasting the 2am closure rule that ends that say.

Cheung welcomed the relaxation but said bars are still restricted to a 75 percent capacity cap, and diners are required to show negative rapid test results.

She hoped social distancing rules can be further relaxed.

Restaurant owners in Lan Kwai Fong said they were fully booked but insisted the outlook for the year remains dim.

One, Kwok, expects a 30 percent drop in business this year due to the rule on closing times.

"We are closing at midnight tonight, and our last order time will be at 11 am," Kwok said.
#Covid
Add Comment