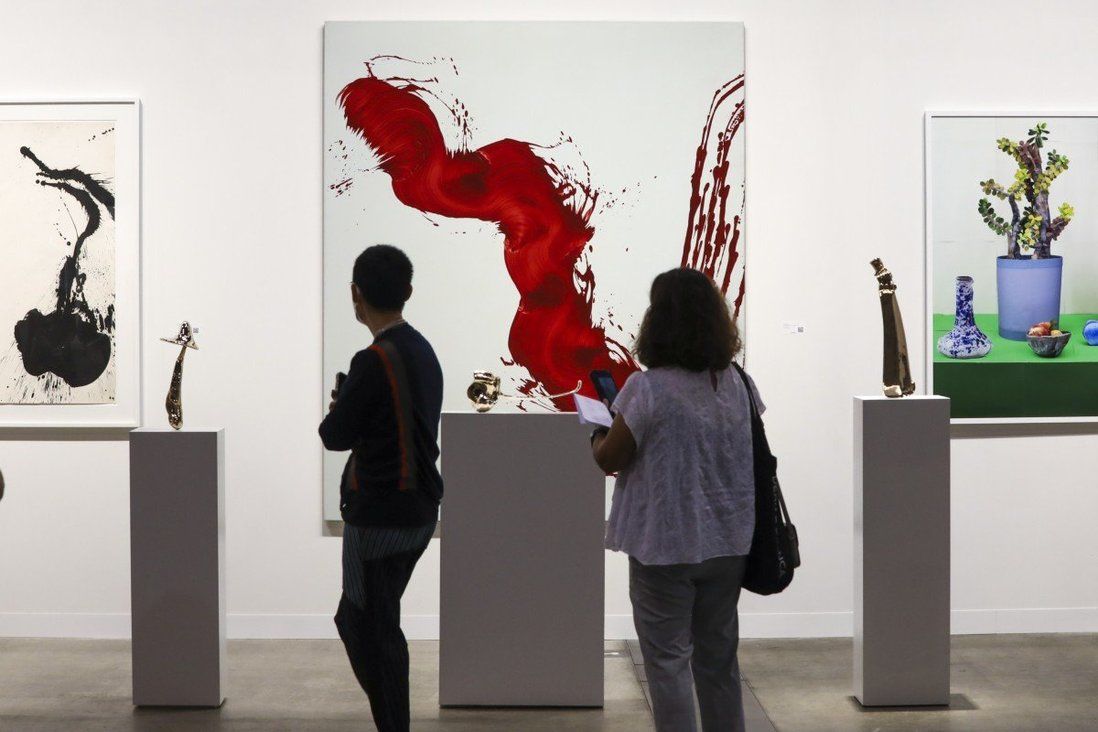 Party mood at Art Basel, but this is no return to normal for Hong Kong

There is a festive atmosphere as Hong Kong begins its annual celebration of art, but there are fears about the concerns about the city’s future as an art market. A slow start to sales, tepid interest from mainland VIPs and more suggest this is not the year the city returns to normal.

Art Basel Hong Kong seems to still have that recognisably festive atmosphere. This year, there is good reason for the party mood. The annual international art fair, which opened to the public on Friday, coincides with the partial relaxation of border controls and social distancing rules.

There is much to see around town during “art month”, both inside and outside the ticketed fairs that are Art Basel and Art Central at the Hong Kong Convention and Exhibition Centre. They include The Shape of Light, a new video by Ellen Pau shown every evening on the external facade of the M+ museum, and plenty of excellent exhibitions around town. But “normal” this isn’t.

Since MCH Holdings – the Swiss parent company of Art Basel – bought a majority stake in Art HK in 2011, the Hong Kong edition of the global contemporary art fair franchise can justifiably claim to be the leading, or perhaps the largest, international art fair in the Asia-Pacific region.

That was definitely the case based on the number of exhibitors and value of art that is bought and sold. In 2019, the fair opened during the first of the mass protests against extraditions to mainland China, which dissuaded visitors from flying in. Even so, 242 galleries took part and a record 88,000 people attended across five days.

Then Covid-19 hit. The 2020 fair was called off, to be replaced by a boutique fair called “Hong Kong Spotlight by Art Basel” with just 22 exhibitors that November. Last year, the fair was less than half the size of 2019’s with just 104 booths sold. This year, it crept back up to 130, with a mostly local audience and the notable absence of international VIPs.

Worryingly, the big money has been coming in more slowly than before. On Wednesday, the first of the private viewing days for VIPs, confirmed sales according to Art Basel were mostly mid-range works. There were few works above HK$1 million (US$127,000) sold, let alone hitting the US$1 million mark, the segment for which a number of the international galleries always aim.

More expressions of interest are likely to be converted into actual sales in the next few days, and a large number of the sales are kept secret, given the notorious lack of transparency of the art business. But, on the ground, gallerists interviewed by the Post say they are still relying on local buyers, and that mainland and international VIPs are still refusing to visit in person because of Hong Kong and mainland China’s quarantine requirements.

Virtual viewing and buying is a popular option, but that brings limited economic or cultural benefit to the city. The rest of the world has been busy in the 26 months since Hong Kong banned most non-residents from entry, with the restrictions only lifted on May 1.

Seoul, which like Hong Kong has no tax on the sale of artworks, is now home to a growing number of major international galleries and Frieze Seoul, the new Asia art fair set to be launched in September by Art Basel’s international rival. Frieze was in talks to set up its first Asia fair in Hong Kong a few years ago. In Singapore, Art Basel has reinvested in a new fair called Art SG that opens in January 2023 after selling out in 2018. 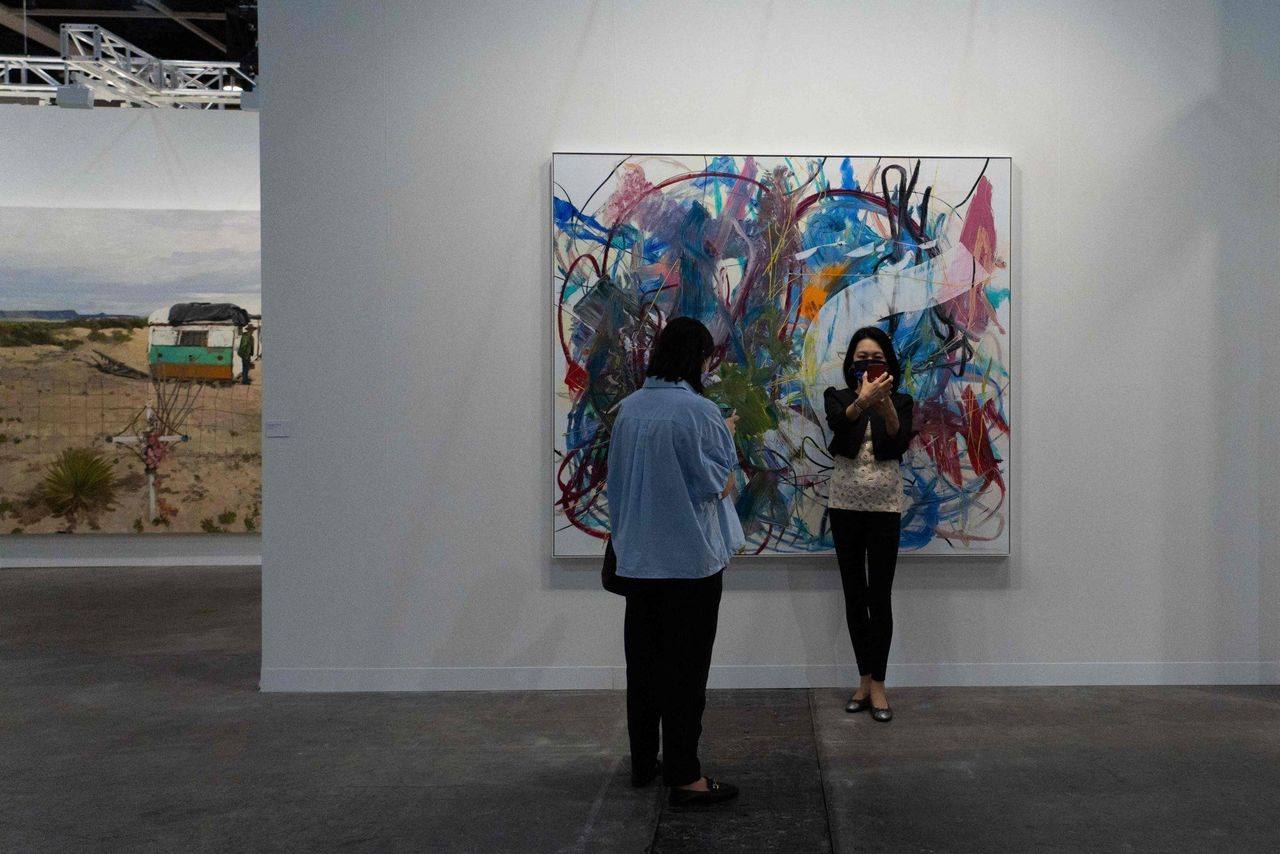 A visitor takes a selfie in front of Teal Swipe by Aaron Garber-Maikovska on the second preview day of Art Basel in Hong Kong on May 26.

Mainland VIPs, who are the lifeblood of the international art market, are undecided on the importance of coming to Hong Kong.

Yan Lugen, the often controversial property developer and art investor who has epitomised China’s rise as the world’s second-largest art market through his extravagant and high-profile purchases in auctions and boasting of having more than 50 works by Pablo Picasso, including Woman in a Green Hat, tells me that the city is “no more”.

His main complaint: “Hong Kong will become just like mainland China with all the restrictions, and it hasn’t got scholars and art experts to be anything but an entrepot.”

Others with more moderate views say privately that they are simply unable to plan beyond the mainland’s slow exit from lockdowns and border controls, while the economic slowdown in China is weighing on everybody’s mind.

What about Hollywood? Film star-spotting used to be a popular game at the Convention Centre, but now Frieze is in Los Angeles and Macau casinos are no longer paying the likes of Leonardo DiCaprio to make promotional films.

Beyond the glitz and the dollar signs, there are also question marks over Hong Kong’s role as a major cultural bridge for China and the West after the protests and the pandemic. For that, you need a diverse population, and artists.

At the moment, Western families are leaving in droves, and so are Hong Kong Chinese artists. So this will not be the moment when the city turns the corner after three hard years.