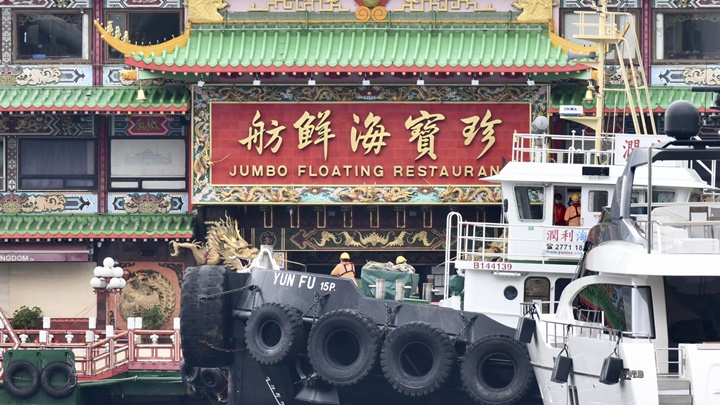 After that, a shipyard said on Monday (November 7) that it is suing the barge’s owners to return handling fees as the owners have not transferred the ownership of the barge to it in accordance with a contract.

In a writ filed to the High Court on Monday, King Field Shipyard said Jumbo's parent company Aberdeen Restaurant Enterprises and Tai Pak Sea-food Restaurant failed to address the agreement - which was signed on May 19 - to transfer the ownership of four barges including Jumbo, to the shipyard, after it paid a HK$5.4 million handling fee.

However, as the barge owner, Aberdeen Restaurant Enterprises paid a HK$600,000 deposit to the shipyard on May 20, Jumbo capsized while being towed out of Hong Kong.

The shipyard, therefore, demanded the holder salvage the barge and pay compensation of HK$4.8 million.

In a statement issued by Aberdeen Restaurant Enterprises today, it denied that there was still a contractual relationship with the shipyard.

"We have written to the shipyard on July 27 informing that the contract will be automatically terminated," said the enterprise, noting it was not in breach of contract.

The enterprise added it would actively respond to the lawsuit and file a claim against it.

According to the shipyard, under the original contract, Aberdeen Tai Pak Sea-food Restaurant and Aberdeen Restaurant Enterprises were required to deliver the four barges by July 31.

Even though being told on June 1 by the restaurant enterprises that Jumbo had capsized, the shipyard claimed it would still be willing to move forward with the contract.