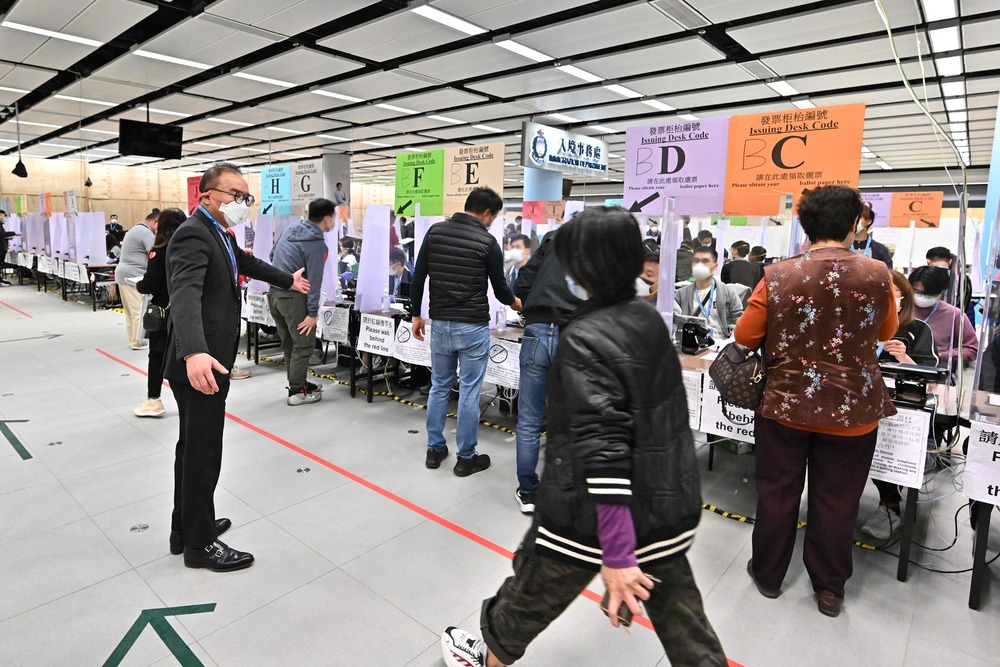 Over 14,000 Hongkongers cast their votes at border points

Over 14,000 of the 22,000 registered voters on the mainland cast their ballots at the three polling stations at border points, which are specially set up for the first time in this year’s Legislative Council election due to the pandemic.
The crowds at the border led to misunderstanding, as some Shenzhen residents thought the border was reopened after seeing people queuing outside the Luohu control point.

Voters who have registered online can cast their ballots at the polling stations at Heung Yuen Wai, Lo Wu and the Lok Ma Chau Spur Line. More than 370,000 Hong Kong residents are living in the mainland, according to mainland authorities statistics.

Voters said the process was smooth and it only took them less than half an hour to finish voting, but some said they could only receive limited information on the candidates in the mainland, mostly from state-run news websites.

As of 6pm Sunday, around 14,000 Hongkongers, or 63 percent of over 22,000 registered voters in the mainland, had cast their vote, Electoral Affairs Commission chairman Barnabas Fung Wah said.

Fung said the polling station at Lok Ma Chau saw the highest turnout rate as more than 6,000 of 8,800 registered voters of the station cast their vote, or 68 percent. More than 6,100 and 7,000 Hongkongers voted at Heung Yuen Wai and Lo Wu, respectively.

Shiu, a Hongkonger living in Beijing, flew to Shenzhen on Saturday and cast his vote at the Heung Yuen Wai port at 10.30am. Shiu said he only needed to present his ID card to get the ballot and return to the mainland right after polling, with the whole process taking around 20 minutes.

He said the closed-loop management at the polling station was satisfying and staff members at the polling station also did a good job in disinfection, adding voters were required to wear masks and disinfect their hands before casting their votes. Shiu said he was happy to vote and fulfill his civic responsibility amid the pandemic.

“I came to the polling station early so I had to wait for more than 10 minutes. There were a dozen people waiting in line at the beginning but the queue moved quickly,” he said.

However, some voters said they did not have sufficient knowledge about candidates for election as they could not receive any election information.

A female voter of New Territories North geographical constituency living in Shenzhen, Tsang, who voted at Heung Yuen Wai said she did not know how many candidates were running in the district.

Tsang, who had voted in Hong Kong before, said she could only learn about candidates’ information and political views on the liaison office website, TV programs and pro-Beijing media including Wen Wei Po.

Another Kowloon Central district voter living in Shenzhen, Yu, knew there were three candidates in the district. However, he could not receive any information related to the election in the mainland and he could only check each candidate’s political views at the polling station before casting his vote.

Shenzhen authorities have banned people who have been to medium or high risk areas within 14 days or those infected with Covid-19 within three months from entering the polling stations even if they have registered to vote.

Another, So, who failed to register before December 8 was rejected from entering the Lo Wu polling station in the morning.

So learned that Hongkongers could cast their vote in the mainland from mainland news reports a few weeks ago, but he did not know he had to register at the Hong Kong government website as he did not receive any notice. He also said the deadline for online registration was too early.

“I was not sure that I’ll be available for voting until a few days ago, but I still cannot fulfill my civic responsibility,” he said.
#COVID-19  #Covid
Add Comment