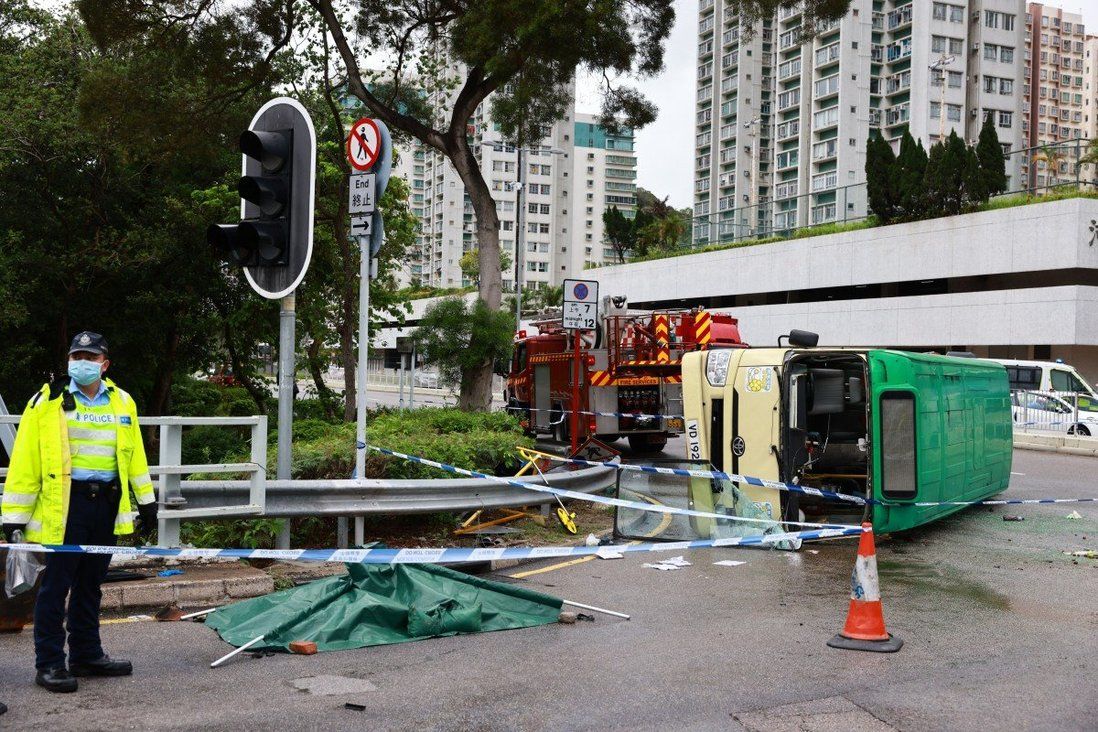 A middle-aged minibus driver died and seven others were injured when his vehicle and a car collided at a Hong Kong junction on Sunday.

Online dashcam footage from another vehicle showed the route 803 green minibus was hit on its right side as it travelled along Tai Chung Kiu Road.

After the impact with the white private car at the junction with Sha Tin Wai Road, the Ma On Shan-bound minibus flipped on its side, smashing its windows and badly damaging the windscreen. The front of the car was also severely damaged.

Police said the minibus driver, 57, was certified dead at the scene. The minibus had six passengers on board while there were two in the car along with the female driver, officers said.

Four of the injured were sent to Prince of Wales Hospital in Sha Tin, with two in serious condition and two listed as stable, according to the Hospital Authority. Three others were taken to Alice Ho Miu Ling Nethersole Hospital in Tai Po and were in a stable condition.

The Fire Services Department said it had deployed 65 rescuers and paramedics to the scene.

The minibus driver was said to have worked on the 803 route, which runs between Hin Keng Estate in Tai Wai and Lee On Estate in Ma On Shan, for two years. Police were investigating the cause of the accident, which severely disrupted traffic. 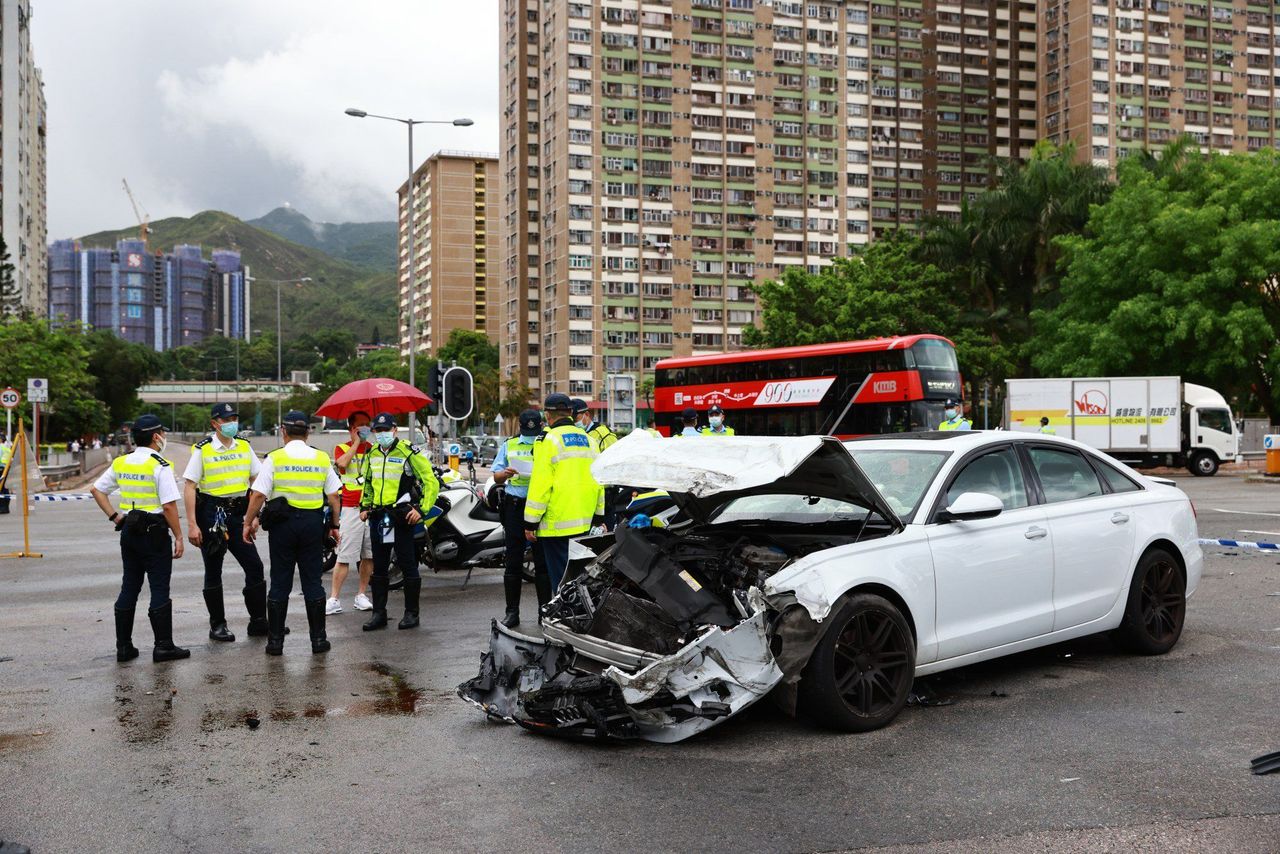 The car driver was also hurt in the accident.

The minibus driver and a passenger were thrown from their seats in the collision.

“Whether the driver was wearing a seat belt or whether the seat belt was properly functioning is one of the directions of our investigation,” police’s Senior Inspector Chan Ho-man said.

“The driving attitude of the drivers involved and whether traffic signals had been obeyed are also among things we will look into. The two vehicles are to be impounded for further investigation.”

The area was the scene of another traffic accident earlier this month when a full school bus crashed into two other vehicles near the intersection of Tai Chung Kiu Road and Fo Tan Road before stopping by a riverbank. Twenty-four people, including 22 primary school pupils, suffered minor injuries.

In May 2010, at the same junction as Sunday’s accident, a minibus passenger was killed and six others injured when the vehicle somersaulted into an underpass after colliding with a taxi. It was believed either the minibus driver or the cabby had tried to speed through a red light. In March 2000, also at the junction, a car and a minibus collided after one of the vehicles allegedly ran a red light, resulting in one death and injuries to 13 others. 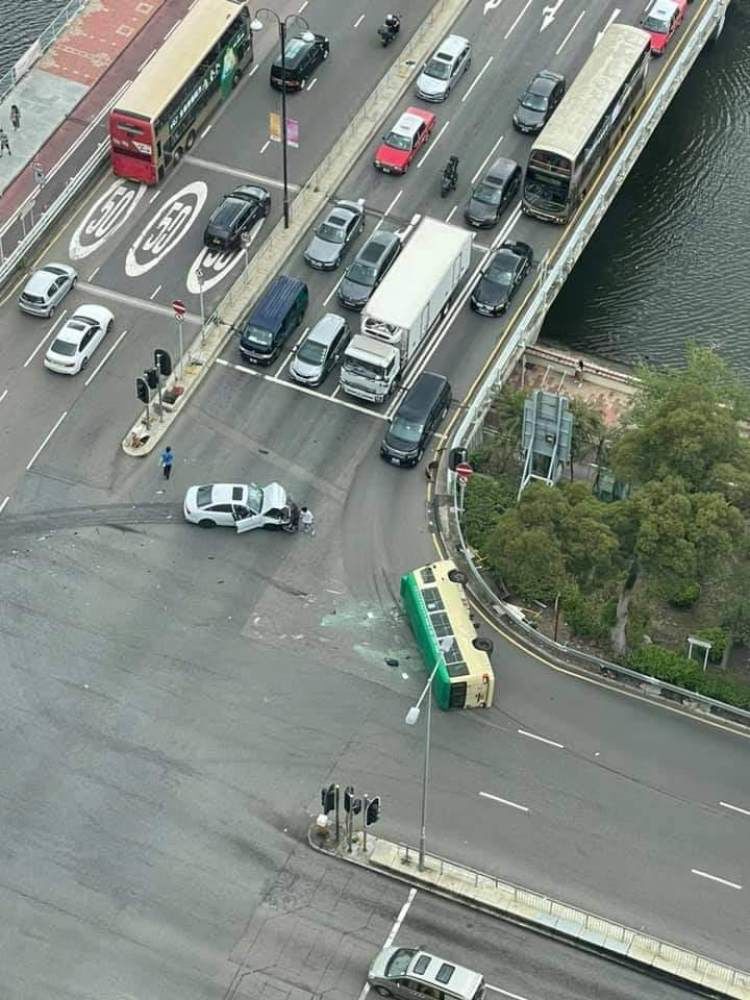 The scene of the accident.

“On average there are one or two accidents every week. The issue had been raised in the district council before but there does not seem to be much improvement,” he said.

“There is a theory that Tai Chung Kiu Road is straight and wide, therefore, it might easily invite speeding. Some 1½ years ago, the authorities tried to adjust the traffic lights to control traffic.

“There were also suggestions that a stricter speed limit should be imposed on Tai Chung Kiu Road. But, some residents in Ma On Shan were concerned that if the traffic flow was made too slow, traffic jams could easily result especially during rush hours and it could take them longer to get to work. I think a more workable way is for police to patrol more or set up roadblocks to check speeding.”

According to the latest available statistics, 53 traffic accidents occurred on Tai Chung Kiu Road in the first nine months of 2019. There were 43 for the whole of 2018, up from 39 in 2015. Most involved private cars, taxis and buses.

The maximum penalty for a conviction of dangerous driving causing death is 10 years’ imprisonment and a HK$50,000 fine.