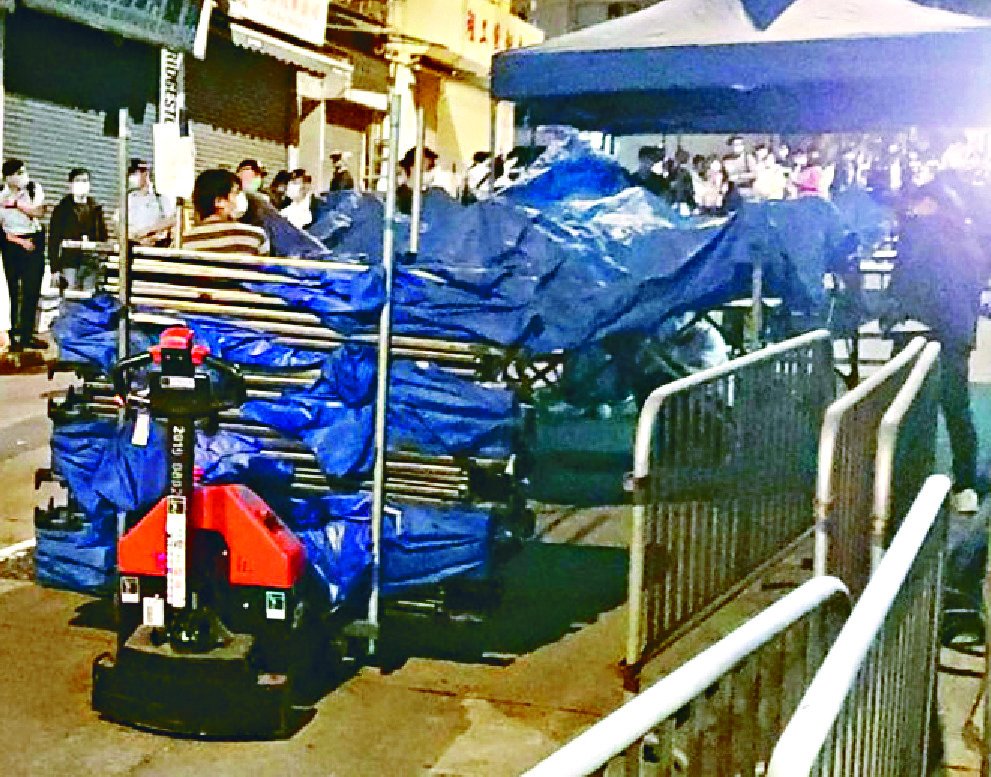 A residential building in North Point at the center of the latest Covid-19 outbreak was placed under a surprise lockdown for the second time this week.
All four blocks A to D of the Tung Fat Building at 21-51 Kam Ping Street were sealed off at 7pm yesterday before authorities made the announcement 16 minutes later, with residents to be tested by 2am today.

The lockdown came a day after the evacuation of some residents from block C and orders for all residents from 500 units in the 15-story blocks A to D to undergo mandatory tests. The original deadline for block C was yesterday and the other three today.

So far, 13 cases have been found in eight flats in block C, with most of them living in units six and seven. Government adviser Yuen Kwok-yung inspected the blocks on Wednesday and ordered all residents in these two units of block C be sent to quarantine centers.

In a statement released at 7.16pm yesterday, the government said the lockdown started at 7pm, with a target to test all residents by 2am today and unseal the area by 7am when all results are out so they can go to work.

The lockdown is the third in six days. The first lockdown last weekend covered a much larger area of 7,000 residents in dozens of buildings in Jordan. It picked up 13 cases in 44 hours.

The second shutdown from Tuesday evening to Wednesday morning affected only 330 residents in three Yau Ma Tei buildings and picked up one case in 11 hours.

The city yesterday recorded 39 new cases, with all but one transmitted locally, including 20 untraceable ones. Another 40 people tested preliminarily positive.

A new cluster of five cases surfaced at a redevelopment site of Kwong Wah Hospital in Yau Ma Tei, four days after the first case was found Sunday.

It was revealed after other staff at the site complained that its contractor, China State Construction International, had hidden the cases from workers by asking them to take Monday and Tuesday off work without explanation.

They said the site resumed operating on Wednesday, causing workers to panic.

Chuang Shuk-kwan, head of the Centre for Health Protection's communicable disease branch, said all five patients were construction workers, while admitting that there might be "communication problems" between health officers and the contractor, which wanted to suspend operations for two or three days only.

As the standard practice is a 14-day suspension for any premises where a case has been found, Chuang said her colleagues had contacted China State Construction again to enforce the rule from yesterday.

Lau Ka-hin, Hospital Authority chief manager for quality and standards, said though the contractor had informed them of the infections, the authority did not make an announcement as no patient or medical staffer was involved.

"We will seek to improve our approach, and communicate more closely with the company," he said.

Also, one more building - Laguna City block seven in Kwun Tong - was added to the compulsory testing list, a week after block five residents were required to get tested, with those living in units E moved out last Thursday.

Three residents living in two block seven units tested positive, Chuang said, adding it is uncertain if there was vertical transmission as the two flats were located over 10 floors away but faced the same direction.

Another cluster at a Hung Hom congee shop had one more confirmed case, bringing its tally to eight patients, all of whom are the shop's staff.
#COVID-19  #Covid
Add Comment