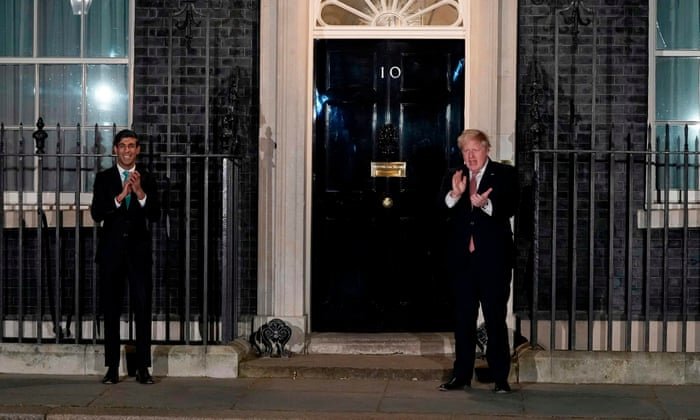 Government ‘too slow to act’ and ministers have failed to lead by example, health experts say
Boris Johnson was accused of failing to heed his own advice to the public over how to contain coronavirus on Friday as it emerged that he and other key government figures had themselves contracted Covid-19.

On a day of extraordinary developments at the heart of the operation to counter the virus, both the prime minister and health secretary, Matt Hancock, said they had tested positive. The chief medical officer, Prof Chris Whitty, also reported symptoms and went into self-isolation.

But while Johnson said he would be able to continue to run the government’s response to the crisis alone in his Downing Street flat, public health experts rounded on his attitude to the infection and accused him of being “nonchalant” and “slow” to behave appropriately.

The prime minister has previously been accused of failing to keep an appropriate distance from other senior figures in public, and has continued with parliamentary duties this week, raising the possibility that he may have infected others in the cabinet and beyond.

On another day of rapid growth in the number of deaths caused by the virus, Johnson issued a video message revealing that he had developed “mild symptoms”. But he added: “Be in no doubt that I can continue, thanks to the wizardry of modern technology, to communicate with all my top team to lead the national fightback against coronavirus.”

Johnson’s chief adviser, Dominic Cummings, was subsequently spotted running out of No 10 and along Downing Street, apparently hoping not to be noticed.

Not long afterwards, Hancock issued his own statement saying he too had tested positive, and would be working from home. And later in the day, Prof Whitty, who had advised the prime minister to get tested, said he too was displaying symptoms.

The three men leading the UK’s response to the pandemic – Johnson, Hancock and Whitty – must now do so from quarantine, as cases continue to surge.

The foreign secretary, Dominic Raab, is the designated stand-in for Johnson if the prime minister proves unable to continue with his duties, but that contingency plan has not yet been activated.

Cabinet Office minister Michael Gove announced at Friday’s Downing Street press conference that another 181 people had now died from the virus, taking the total across the UK to 759.

Experts questioned whether Johnson had been shielded from the virus effectively enough, and asked why ministers and other colleagues who have worked closely with him in recent days were not being tested.

The deputy chief medical officer, Dr Jenny Harries, said detailed contact-tracing was “not appropriate” at this stage of the outbreak, but that the men would have been tested because of their importance to the government’s response to the crisis.

Johnson’s spokesman said: “No 10 is considered a workplace. The advice to staff here and the prime minister’s colleagues is that they don’t need to do anything in terms of self-isolation unless they start to suspect that they have symptoms, in which case they should follow the Public Health England advice.”

Despite urging the nation in a solemn broadcast on Monday evening to “stay at home” where possible, Johnson continued to carry out his parliamentary duties, including prime minister’s questions – though the Downing Street press briefings have been carried out by video link since Monday.

Prof Susan Michie, director of the centre for behaviour change at University College London, said: “Those in leadership positions should practise what they preach. If leaders do not adhere to their own recommendations, this undermines trust in them, which in turn can undermine the population’s adherence to their advice. The advice was to go to work only if essential or if you could not work from home and could guarantee your own and others’ safety by keeping at least two metres apart.

“Given the transmission routes, of touching contaminated surfaces and breathing in virus-laden droplets, it should not come as a surprise to hear that the prime minister and health secretary have tested positive.”

Dr John Ashton, a former regional director of Public Health England, said: “The government has been too slow to act on this, and they’ve been slow as individuals. I was surprised to see prime minister questions going ahead this week – it was clearly unnecessary.

“It reinforces the view that lockdown measures taken earlier this week should have been taken sooner, and raises questions about the ability of people in power, including the prime minister, to discipline themselves. They should all have been more careful.”

Prof Devi Sridhar, chair of global public health at the University of Edinburgh, said: “Leaders need to lead by example. It wasn’t a good thing that he was telling people that he was going around shaking hands and being quite nonchalant about the virus.”

Johnson received the result of his test at midnight, hours after he was seen outside the door of No 10 clapping in support of NHS workers alongside the chancellor, Rishi Sunak.

Both Johnson and Hancock have been in repeated contact with other senior political figures, including cabinet members and advisers, in the last few days. But no other ministers would be tested for the virus unless they showed symptoms, Downing Street said.

It is unknown how Johnson contracted the illness, but officials confirmed that other people who worked in No 10 were self-isolating after showing symptoms.

Johnson’s spokesman said: “From the moment he had symptoms, he took steps to ensure that he wasn’t in close contact with anyone.

“He did really want to take part in clapping NHS staff. It’s something he felt was important, but in taking part in that national moment he ensured he didn’t come into close contact with anyone. He stood outside No 10 at a very significant distance from the chancellor.”

No 11 Downing Street and its four-bedroom flat– previously occupied by the former prime ministers David Cameron and Tony Blair – have been sealed off from No 10 and No 12 by shutting the doors that staff and government officials usually use to move between the buildings.

The prime minister will work from the office usually used by the chancellor, who has given it over to Johnson during his period of isolation. It has been fitted with video-conferencing equipment.

During his isolation, Johnson will have meals and work delivered to him by staff, who will knock on the door and then give him time to collect it.

The prime minister’s spokesman would not comment on whether his partner, Carrie Symonds, who is pregnant, was in Downing Street or would be self-isolating. The recommendation for members of the household of someone who has the virus is to self-isolate for 14 days.
Add Comment