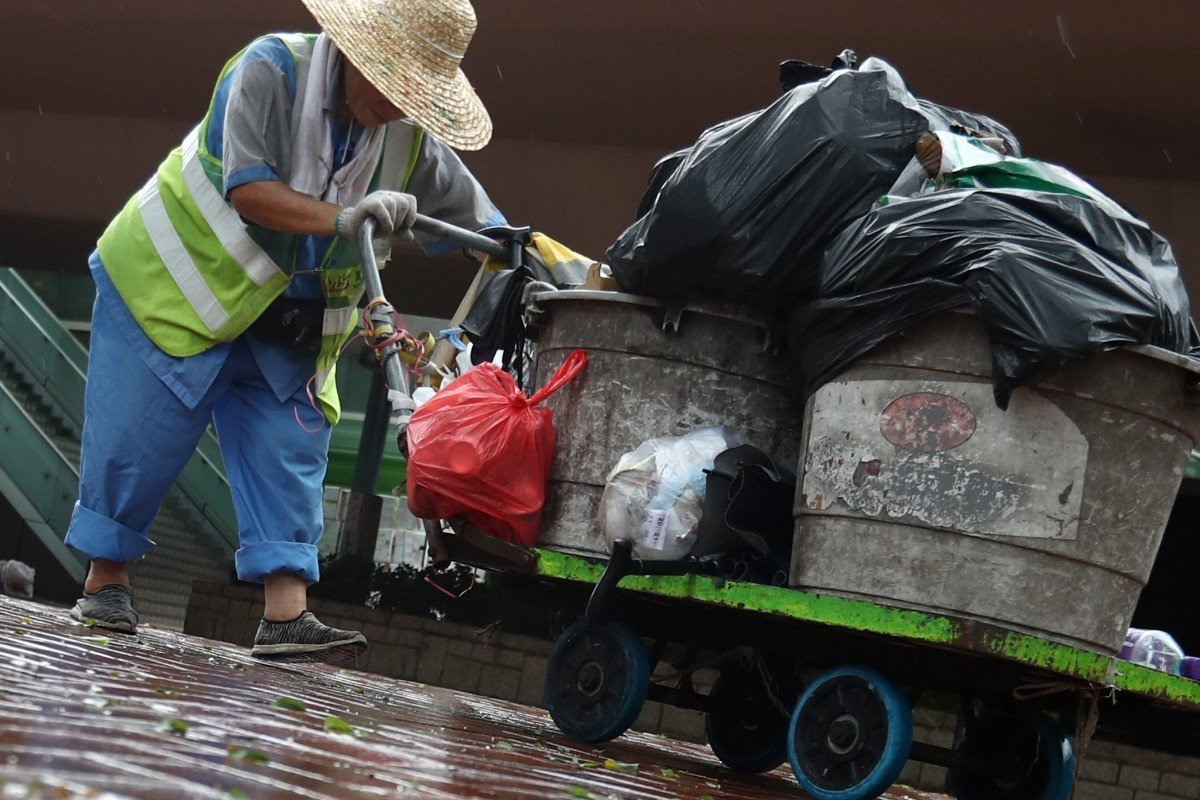 The 53-year-old, in the job for more than 20 years, cleans residential and commercial buildings, as well as shopping malls in Hong Kong’s Causeway Bay and North Point. Asking to be identified by only his surname, he says the work is strenuous and underappreciated, but the pandemic has made it more challenging.

He says he has never experienced such intense stress at work, from the increased workload and fear of becoming sick. Although he has persevered, he is disappointed in the lack of acknowledgement for the efforts of workers like him.

“Cleaners contribute to the city’s anti-pandemic efforts, but nobody recognises it. We are regarded as low-class workers,” he says.

He is among the frontline workers who keep the city functioning, even as what they do puts them at higher risk of infection as Hong Kong battles a severe third wave of Covid-19 cases.

The surge in infections since July has raised the city’s confirmed cases to more than 3,900, with the death toll beyond 40. 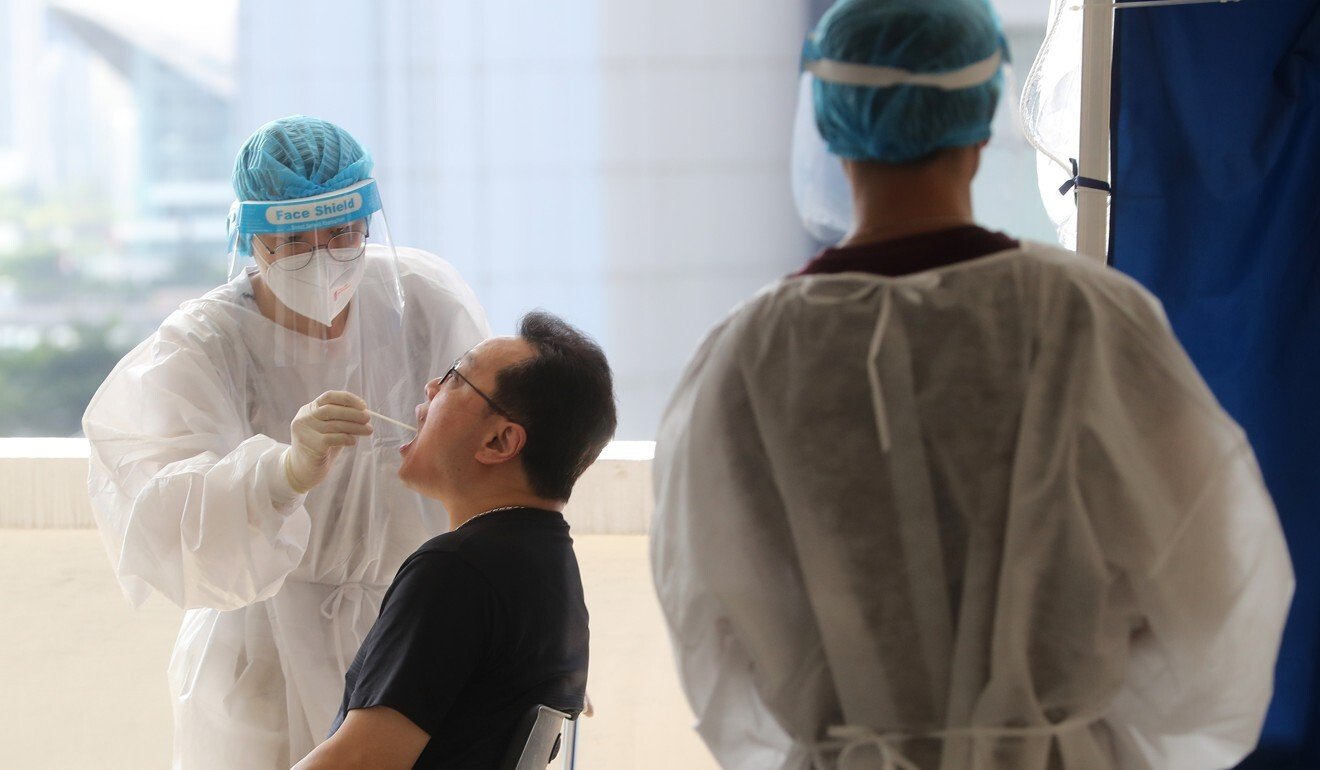 Calls have been raised to provide free coronavirus testing for at-risk groups. Photo: Edmond So

Aside from cleaners, public transport workers and property management employees are also among those expected to remain at work, dealing with members of the public.

There have been calls to provide these frontline workers more protection and compensation but, ironically, the pandemic has resulted not only in more work and more risks, but also a decline in pay for some.

Chiu says there is more cleaning and disinfecting to be done these days.

He and his colleagues, about 100 in all and aged between their 40s and 70s, now have to disinfect the areas under their care every hour during each 10-hour shift, compared to once a day previously.

There is also more garbage to collect from residential blocks, as more Hongkongers work from home. Chiu says he collects about eight barrels of garbage from each residential building daily now, twice as much as before.

At the start, protective items such as masks were in such short supply that some cleaners used the same face covering for days, or not at all. Now Chiu gets two masks daily. Cleaners also have their temperature checked twice or thrice a day.

Every morning and night, Chiu scans the government’s updated list of places with infected Covid-19 cases to see if any of his colleagues live there or nearby.

He says cleaners who live in a building with confirmed cases, or even in the area, have to self-quarantine for two weeks, or take a coronavirus test and wait for the results before resuming work.

For affected workers, this has meant fewer hours at work and having their income slashed. Cleaners earn on average about HK$10,000 a month.

Chiu says some gave up and stopped working, but many have carried on even when asked to clean and disinfect buildings with confirmed Covid-19 infections.

What is discouraging, he says, is the lack of recognition and people’s prejudices against cleaners.

“When infections break out in a place, who is usually the first to arrive? We cleaners,” he says. “People usually take cleaners’ work for granted, but do they ever consider that we are also humans and we face risks during the pandemic?”

‘We face increased risks of infection’

Henry Hui Hon-kit, 57, a bus driver of more than 20 years, says coming into contact daily with numerous passengers is stressful and he takes strict precautions to protect himself as well as those who get on his bus.

Before he starts each trip, he disinfects the driver’s area and uses a hand sanitiser before putting on a pair of gloves. All this shortens his breaks.

Before he starts each trip, he disinfects the driver’s area and uses a hand sanitiser before putting on a pair of gloves. All this shortens his breaks.

Mask-wearing on public transport has been mandatory since July 15, with a maximum fine of HK$5,000. Hui says if he spots passengers without a mask or wearing one incorrectly, he reminds them, and most heed the advice.

If passengers refuse to wear a mask, the company’s guideline allows drivers to ask them to get off the vehicle. 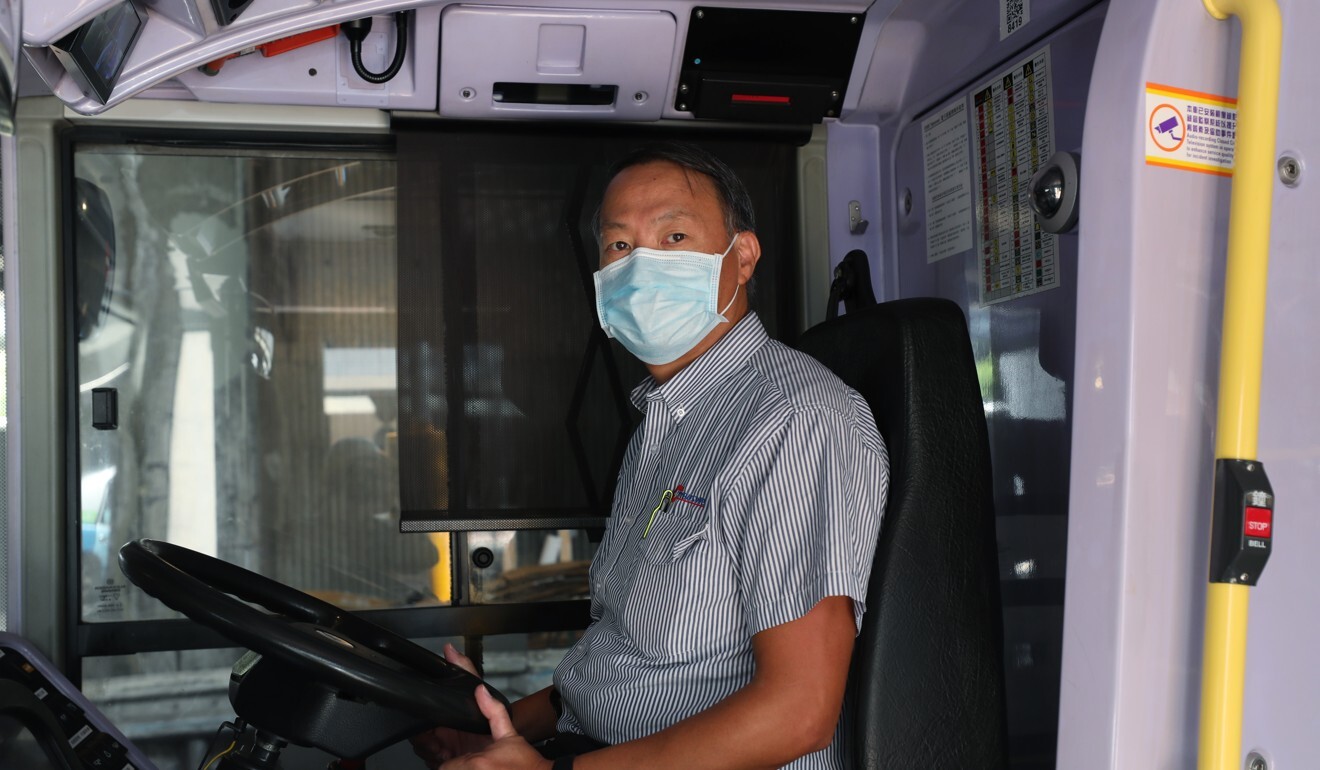 “We don’t know if a passenger is infected,” says Hui, who is chairman of the Citybus Employees Union, representing about 500 drivers.

With more people staying home, there has been a sharp fall in passengers and bus companies have cut the number of buses in service.

The result of reduced services, Hui says, is that the buses are more crowded, putting him on high alert of the health risks.

It has also meant a cut in work hours and income. Hui says his monthly income is down by about HK$3,000, while most of his colleagues who used to do more overtime work are earning HK$6,000 to HK$8,000 less a month.

Working less has not left him more relaxed, because he is always worried about infecting his wife, son and daughter.

“The first thing I do when I get home is clean my hands, disinfect my bag and put it in a clean plastic bag,” he says. “We are all worried.”

‘We are the first ones they turn to’

Property management officer Ng Ka-yin, 40, has never felt more stressed in about 20 years working in the sector. In mid-July, a residential building she oversees had its first confirmed Covid-19 case.

Until the third wave of infections arrived, she and other frontline property management staff, including security guards and cleaners, managed to keep the coronavirus at bay in nine residential buildings, housing some 5,000 households in Ma On Shan in the New Territories.

Since last month, she has made it a point to check the Centre for Health Protection’s list of places with infected cases every night. 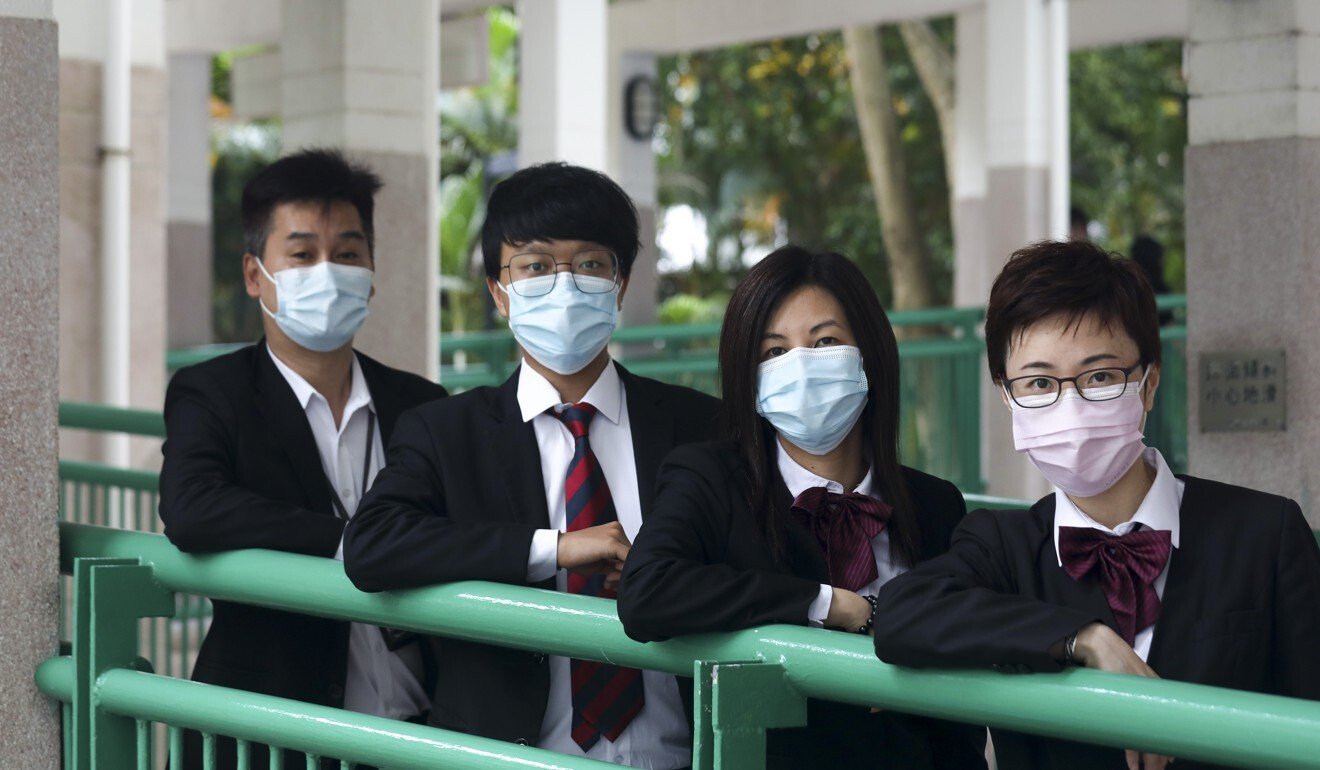 She remembers how she rushed back to work at midnight after discovering a building in her care had a confirmed case. She had to draft a notice for residents and arrange for the building to be disinfected immediately.

She went to the affected building the next morning to coordinate the disinfection work, as calls flooded in from worried residents. Ng recalls answering more than 30 calls, and having to explain the situation and calm the residents.

“I felt immense pressure,” she says. “That was the first case we had since the pandemic started. Everyone, staff and residents, was anxious.”

She says compared to the severe acute respiratory syndrome (Sars) epidemic of 2003, the pandemic has lasted longer and is taking a heavier toll on those at the front line.

She keeps going because there is satisfaction in helping to keep residents safe.

“After all, we are the first ones they turn to,” she says. 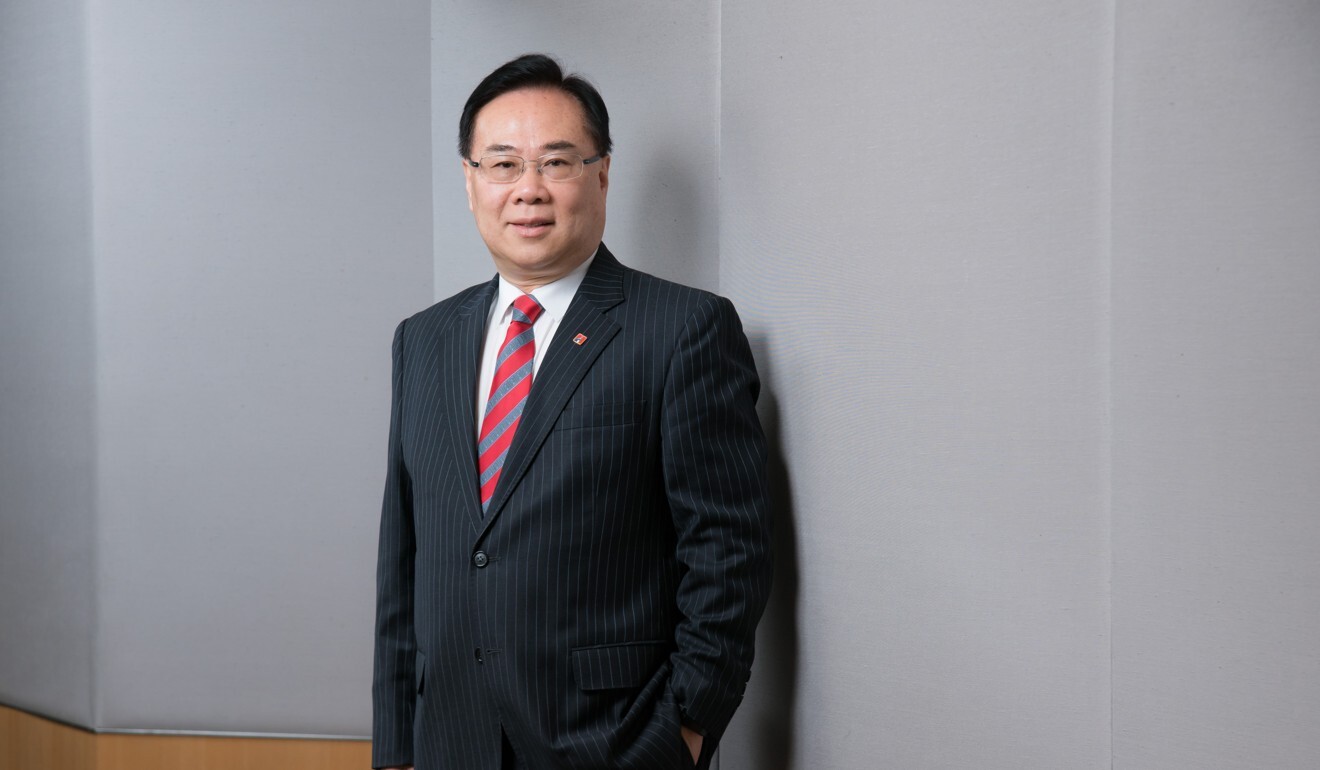 The government announced on July 14 that it would provide Covid-19 testing for 400,000 people from high-risk groups, including staff of care homes for the elderly and persons with disabilities, taxi drivers, restaurant staff, and property management personnel.

He says unlike the hardest-hit sectors like catering and retailing which have seen massive lay-offs, frontline property management staff are more needed than ever.

Leung Tsz-yan, organiser of the Cleaning Workers Union, says there is still a lack of gear, such as protective clothes, for cleaners.

Some who work in areas with infected cases have nothing but masks to shield themselves, she says, adding that they should also be equipped with gloves, shoes, goggles and protective clothes.

Bus driver Hui hopes the government will boost Covid-19 testing for drivers too, and says bus companies should step up the disinfection of buses.

Despite the hard work and risks, cleaner Chiu tries to keep up his spirits at work and also encourages his stressed colleagues to stay strong.

“We are contributing by keeping the city safe and clean,” he says.