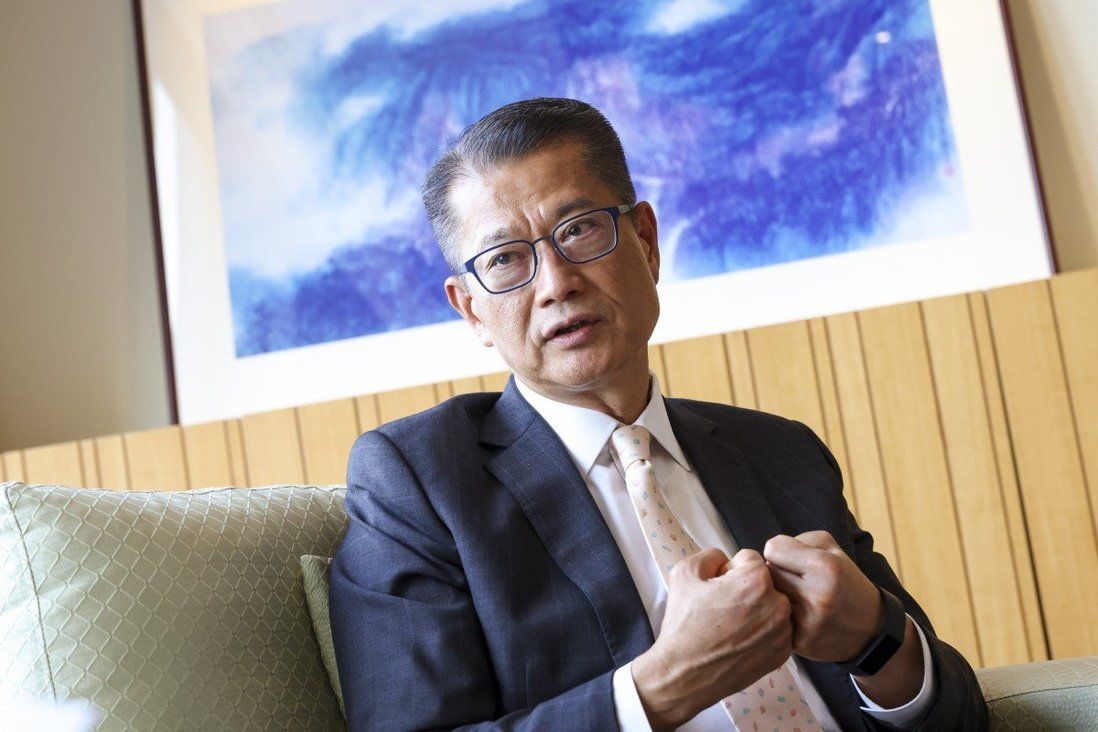 Hong Kong’s top financial official has said there is no timetable to incorporate China’s anti-sanctions law into the local legislative framework, in the strongest assurance yet to the business community that such a contentious move will not be rushed.

In a wide-ranging interview with the Post, Financial Secretary Paul Chan Mo-po also mounted a robust defence of his unprecedented report on the damage inflicted on the city’s business environment and investment prospects by the anti-government protests of 2019, for which he held the United States responsible as well.

“As far as I understand, there is no definite timetable for this,” Chan said, describing the law aimed at providing legal ammunition to fight back against sanctions imposed by foreign governments and entities as a tool Beijing “may use or may not use”.

China’s top legislative body, the National People’s Congress (NPC) Standing Committee, in August postponed a vote to insert the anti-sanctions law into the city’s mini-constitution, with at least one member saying the delay was to make the eventual adoption more effective.

The legislation, passed in mainland China in June, empowers the authorities to seize assets from entities that implement sanctions against the country, and hold businesses liable if they refuse to help Beijing carry out countermeasures.

While Hong Kong officials have previously sought to reassure the public that the use of the new powers would be targeted rather than indiscriminate, the business community has raised fears the law would leave foreign firms, particularly banks, between a rock and a hard place.

Chan acknowledged the anxiety, but said it was time for businesses to put these concerns aside and focus on the advantages the city continued to hold for investors.

“Strictly speaking, US sanctions do not have any legislative effect here as we only implement UN sanctions. But commercially, these financial institutions have to face the reality of their US dollar clearing ability. So that was the anxiety at that time,” he said.

“I don’t think it is worthwhile to speculate on whether this will be brought back again or not; let’s concentrate on making good use of our advantages.”

But Chan stood firm on the need for the government to call the US out on its intervention in Hong Kong’s affairs over the past two years, specifically with the release on Monday of his report accusing Washington of using the city as a pawn to “suppress China” by inciting and supporting the 2019 protests.

The 68-page report also hailed the national security law for helping restore order, and declared the city was now back on track to offer “outstanding advantages” for future development.

The finance chief said the report was necessary to address “speculation and misunderstanding” among local and international businesses, in particular global firms being questioned by their overseas headquarters about the situation in Hong Kong. 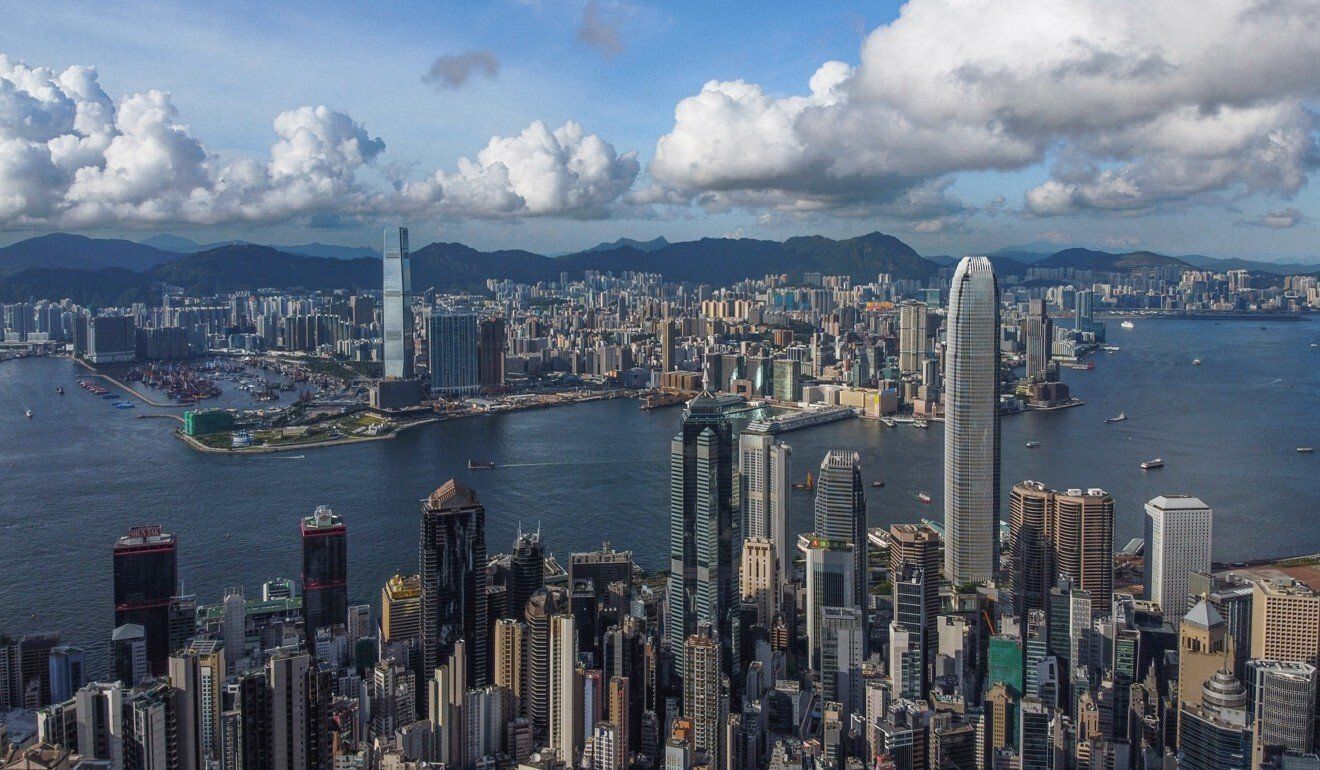 Finance minister Paul Chan said while some businesses had left the city, there had been a net inflow.

Chan dismissed criticism of his use of what some called “provocative language” in the report, which adopted terms used by mainland agencies, including “black-clad violence”, “rioters” and “extremists”.

He said the administration had decided to go ahead after internal deliberation, even if “it may not be music to the ears of some people”.

“When we face it, instead of evading it, hopefully we will appeal to the domestic and international audience that people will appreciate more why the enactment of the national security law is necessary,” he said.

“We did give thought to the language. We came to the conclusion that this is a factual narrative of what happened. Let’s be honest about it, recognise it and then move on.”

While conceding some companies might have left the city after the law took effect, Chan pointed to the net inflow of businesses and investors.

He cited 345 more fund management firms setting shop in the city over the past year or so as an example, after the introduction of a new limited partnership fund regime in August 2020 to allow greater flexibility for investors’ benefit.

Other evidence he cited included moves by insurance firms Manulife and AIA Group to expand their operations in the city, and HSBC’s decision to relocate four London bosses back to Hong Kong this year.

Asked if Beijing had ordered his report, Chan said there had been discussions “about how to promote Hong Kong”.

He added: “Whoever loves Hong Kong would want to relaunch Hong Kong and want to get the proper message to the international community.”

Chan also denied the government had cherry-picked remarks made by foreign chambers of commerce regarding the city’s business environment, while ignoring their concerns over the implementation of the national security law.

Notably, he cited the American Chamber of Commerce’s positive outlook on the city’s future, but did not mention its anxieties over the security law and the potential brain drain as a result.

Addressing the business sector’s concerns that their operations were being hampered by the stringent quarantine measures in Hong Kong amid the pandemic, Chan said Beijing and the city’s authorities were working closely to reopen the border as soon as possible.

“The priority is to seek revival of travelling between Hong Kong and the mainland first,” he said. “Because at the end of the day, to our economy and to our people, this is the most important connection.”

Hong Kong’s border has largely been closed for about 20 months, though it has recorded no local infections for more than a month while reporting only a few imported cases daily.