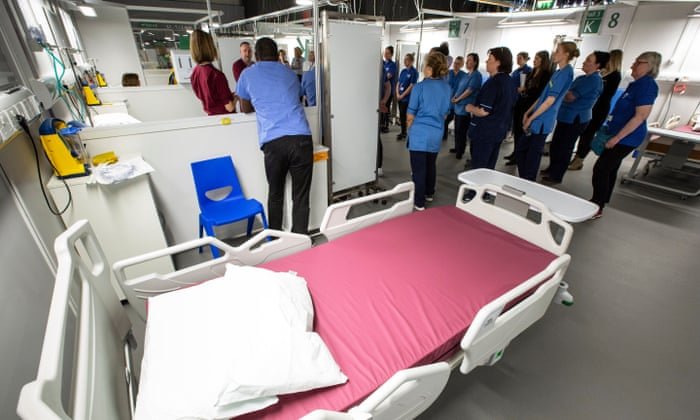 No matter how this coronavirus crisis ends, it will be bad for conservatism

The NHS was a socialist ideal – and now its role has brought about a paradigm shift in the political debate
The government, facing pressing and serious questions about its competence in every phase of the coronavirus crisis, concentrates its focus on that immediate challenge: this isn’t the right time to launch an inquiry, ministers say, this is the time to come together. In bizarre, sixth-form language, they pour scorn on media scrutiny. Probably in some corner of a bygone world, that strategy still works. Yet questions over their capability are not the only challenge they face. More seriously, the virus threatens to upend the conservative worldview.

We know that seismic, destructive events change assumptions, because we have the NHS as proof of it. Out of the second world war came the umbrella principle: if money was no object when it came to killing people, it should be no object when it comes to keeping them alive. From this sprang the greatest public housing project ever undertaken in this country, the extension of universal free education and, most importantly, the moral imperative that medicine should be free at the point of need.

All these projects were undertaken at a time of epic national debt and genuine fiscal insecurity. The message was not so much “money is no object” as “money has no meaning”. Perhaps the NHS has emerged as the most important because it was the one that lasted, or perhaps it lasted because it was the most important. Either way, a principle was established: socialism in health, if nowhere else.

Successive governments have made operational incursions into this territory, introducing markets and piecemeal privatisation in the last century, penny-pinching and more privatisation in this one; but it is politically unthinkable, to question the idea that treatment should be blind to wealth. It’s not a practical point, that things are cheaper when you pool resources, and that people are more secure when they pool their risk; it is a moral commitment to health as a citizen’s right. The notion of British exceptionalism is 99% cant, but the NHS genuinely is exceptional – and it has become part of the national story, with a huge amount hanging off it.

This has led to some mightily weird tensions and contradictions in the public discourse. The overall direction of travel was towards ever greater marketisation, and yet this vast terrain of life-and-limb stayed, in principle at least, money-blind. Over the austerity years, when a life was still infinitely valuable in A&E yet infinitely disposable during a benefit sanction, those conflicts played, if anything, better for the right. All the noble precepts around the NHS were so incongruous that they passed into the category of emotionality, whereupon they could be attached to anything, however irrelevant: have £350m for your NHS (if you leave the EU); get more great NHS access (if you get rid of immigrants). On the progressive side we saw healthcare as the sanctuary of all our pro-social impulses; but on the other side it was the repository for all contradiction and sentimentally, so that Nigel Farage could build rhetoric from it as effectively as Caroline Lucas could.

Now, something much more interesting has happened: health, and its socialist symbolism, has become the overriding priority, the most important determinant of policy. All kinds of organising principles and assumptions thus collapse or simply evaporate: profit is less important than life; productivity is less important than protecting people. Small, tight Thatcherite units of familial care have expanded to encompass neighbours, acquaintances, unknown nurses hundreds of miles way, whose altruism begets gratitude and empathy.

We are forced to reevaluate the low-paid, who previously were portrayed as alternately vulnerable and parasitic, agents of their own misfortune, but with little agency anywhere else. We have the incalculable blessing of immigration paraded daily before our eyes. To get into that classic debate now – “Are they net recipients or net contributors?” – would be unimaginable. These paradigm shifts are already having huge impacts on political debate. If the undervalued have become suddenly precious, what will this crisis mean for those we previously valorised, such as the entrepreneurs?

The concept of wealth creation has already, I suspect, become completely void: turns out you can’t create it on your own; you need workers, and you need customers. The previously comfortable – discovering what it is to be insecure, to be reliant on the state, to be one paycheque from oblivion – will already have reworked their attitudes to social security. All the intellectual scaffolding of free-market fundamentalism, the ideas that held it up and maintained its sense of its own fairness, centred on the idea that money was its own virtue, that respectable and decent people found a way to get it, that those without it were derelict and feckless. It was never possible to dismantle this piece by piece, with graphs, with case studies, but exploding the whole thing happened pretty fast.

As we approach the fifth week of lockdown, there’s been a spurt of competitive pessimism, commentators vying to see who can predict the direst outcome: no, the corona era will not be good for the planet; it will usher in a new populism, a second wave of austerity more deadly than the first, a new authoritarianism; the world can only get worse. Yet what we see unfolding is quite different: hospitals, the one place where money didn’t talk, have become our cathedrals, and the shockwaves are immense. If I were a Conservative government, I’d be looking for a rebuttal to that – but I wouldn’t rate my chances.
#Coronavirus  #Nigel Farage
Add Comment