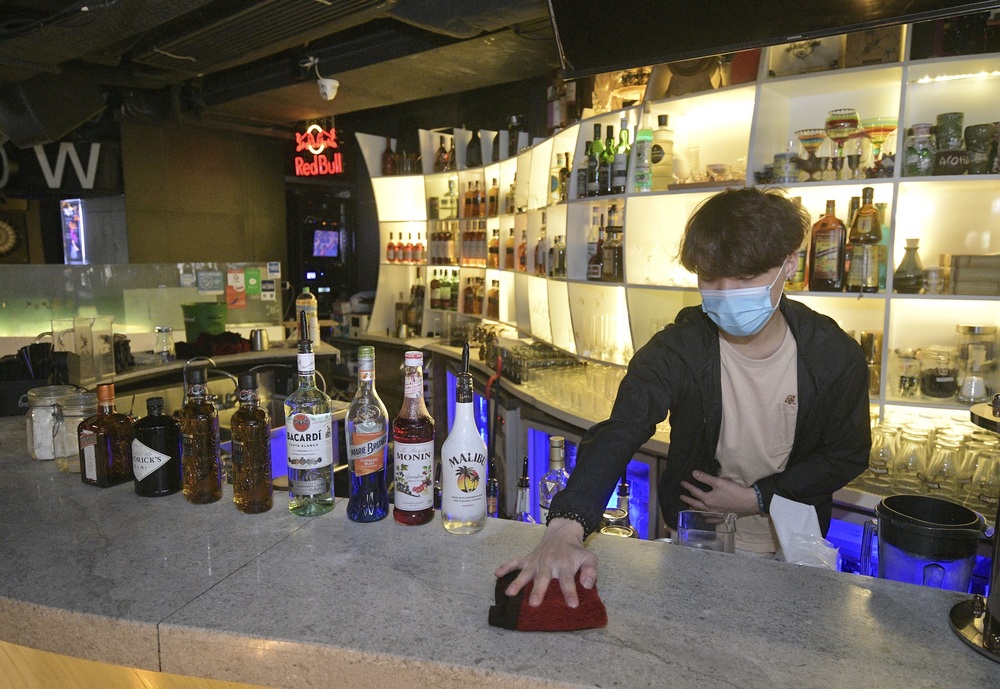 No high hopes for bars despite 'revenge' consumption brought by reopening

The bar industry expected “revenge-style” consumption early when they can finally reopen businesses on Thursday following the second phase of Covid-19 rules relaxation. Yet, operators do not have high hopes that business will return to pre-pandemic level in the long run.
The industry has been ordered by the government to suspend operations for more than five months since the city entered its fifth and worst wave of Covid-19 outbreak in early-January.

Ahead of the reopening on Wednesday, staffers were spotted cleaning the shop and preparing bottles of sanitizers and piles of wet wipes for guests. An operator said he will reopen the bar at exactly midnight.

Ben Leung Lap-yan, charter president of Licensed Bar and Club Association of Hong Kong said although they get used to the unpredictable closing or reopening orders already, the biggest issue remains the manpower shortage.

Leung pointed out that some staffers worked other part-time jobs and waited for bars to reopen during the closure but most switched to other industries permanently over fear that bars would be ordered to close their doors at anytime.

Apart from the rising costs of hiring employees, operation costs including rent and wholesale prices are still a huge financial burden to businesses, Leung noted.

He continued that citizens' consumption pattern has changed and government imposes more restrictions on bars compared with restaurants, with only four guests served a table and closing hour set at 2am.

He worried that the public may not go to a genuine bar, but a restaurant that has been redecorated where up to eight people can be served per table.

On another note, Hong Kong Bar & Club Association's president Chin Chun-wing said the peak hours for bars are between 10pm and 5am. Setting the closing hour at 2am means the industry will lose at least one third of business, Chin said.

Regarding experts' warning of a possible six wave, Chin said he understands people are concerned but hoped those experts won't “make a big deal out of the pandemic.”

“The most important question is whether there is a new mutated variant. Many people have received Covid-19 shots now and the risk should stay at low levels,” he also said.
#COVID-19  #Covid
Add Comment