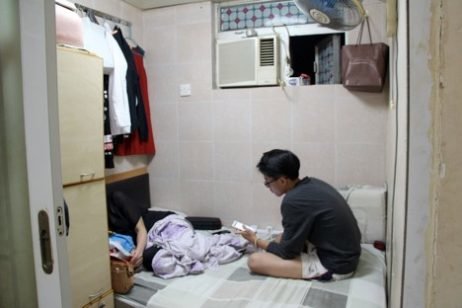 No Future for the Children of Asylum Seekers in Hong Kong

Hong Kong has one of the lowest acceptance rates for asylum seekers in the developed world. For minors, that means a future defined only by uncertainty.

The entire space of the 24 square foot (2.2 square meter) apartment in Sham Shui Po in Kowloon, Hong Kong is usually saturated with the smell of stale cooking grease. There is only one window in the apartment, where the bedroom and the kitchen are the same size.

Hunched on the bed, a skinny teenager was texting his friends. When he spoke, it was barely above a whisper: “I have no dream of the future. Even if I am allowed to stay here until I get a school degree, I don’t know what to expect after that. The only thing I know is that I have to study hard.”

Jason Nguyen Bui Truong, 16, is a Vietnamese asylum seeker living in Sham Shui Po with his family. One night about four years ago, he was told by his parents to pack all of his clothes into a suitcase without any explanation. The next day, they left their home country on a boat.

Jason had watched a lot of TVB movies, which shaped his imagination of Hong Kong. The first moment of landing in a new country that he had thought could only be seen in a movie was overexciting for 12-year-old Jason.

He soon realized that he barely knew this new country and that his life had changed overnight. 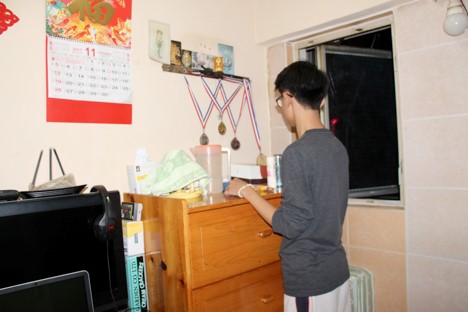 According to Hong Kong Immigration Department, the Hong Kong government had received 17,618 non-refoulement claims between 2014 and the end of April 2020. Of those, only 179 were substantiated.

The approval rate for non-refoulement claims in Hong Kong is among the lowest in the developed world; only 1 percent of applicants make it through under the city’s Unified Screening Mechanism (USM).

Many of these asylum seekers are under 18, which makes them among the most vulnerable groups due to their immaturity and dependency. Like Jason, asylum-seeking children in Hong Kong usually get stuck in a cycle of poverty while lacking a sense of belonging.

Though they can access education under the government’s subsidy schemes for ethnic minority students, even a good performance in school does not mean a guaranteed future.

It took two years for Jason to be accepted to Sir Ellis Kadoorie Secondary School in West Kowloon, one of 30 designated schools that receive additional funds from the government ranging from HK$800,000 to HK$1.5 million (US$103,000 to US$193,000) per year to support ethnic minority children.

Young refugees and asylum seekers in Hong Kong experience considerable delays in accessing mainstream schools, with their education depending on the availability of places and chances.

Their best chance is to enroll in designated schools with a high concentration of non-Chinese speaking students. While the government says that the purpose of these designated schools is to shield ethnic minority students from discrimination at mainstream schools, it is criticized by many as a way to promote racial segregation.

“I have never talked to a Hong Kong student before. It seems that we don’t have any local students in my school,” Jason said. “Most of my classmates are from Nepal, Bangladesh. and the Philippines. I get on well with my friends and enjoy our friendships.” When talking about school, happiness was clear in his face.

Jason first put on a school uniform in Hong Kong in September 2016. Due to the knowledge gap caused by switching education systems between two countries, he was assigned to study grade 3 in Hong Kong’s education system, which put him two years behind of his Vietnamese peers. Sometimes Jason found himself feeling defeated when trying to catch up with the knowledge that he had missed.

“It took one year for me to catch up with my classmates, who are all younger than me. In my first year, I performed poorly in subjects taught in Chinese,” he added. Then he learned how to speak Chinese by playing football with other Chinese-speaking children living in the Sham Shui Po area.

Jason considered himself lucky as a student eligible to receive subsidies from the Hong Kong government. The subsidies pay for tuition fees, uniforms, textbooks, and transportation.

However, the money will be paid in the form of reimbursement by the end of the school year – while his family must pay for those necessities upfront. As the law forbids his parents from working, his mother had to borrow money from her friends to provide Jason with school supplies.

She has been carrying that debt for more than two years while still seeking the reimbursement. To save on transportation fees, Jason walks 15 minutes every day from Sham Shui Po to his school in East Kowloon.

After a year in school, Jason made it to the top of the class thanks to his academic aptitude and natural intellect. He now can speak fluently in English and Chinese. Beside being one of the best students, Jason is also an outstanding athlete, with four gold medals from sports competitions.

Despite his love for school, Jason has been missing many afternoon classes on Wednesdays, when he has to accompany his parents to present themselves at the Immigration Office.

“We come there [the Immigrant Office] every two weeks so they can extend our papers for staying here. Our refugee application has been processing for 4 years,” Jason explained. As all the teachers at school are aware of his situation, they try to avoid scheduling important exams on Wednesdays.

Despite his admirable performance in school, Jason does not have the luxury of making dreams for the future. He’s not even sure how long he can stay in his new home.

“Will they allow me to stay here if I have high achievement in school?” he wondered. “I am not sure, but I want to stay in Hong Kong and [be] identified as a Vietnamese. I love school and friends here but it would be nice if I can sometimes come back to Vietnam to visit my old friends.”

Jason has never asked his parents about their presence in Hong Kong. It is easy for him to understand that a son should go with his parents wherever they take him. But for now, he feels unfamiliar with the idea of a long-term plan.

When talking of future, he thinks in terms of two week blocks — if the Immigration Office continues to extend his papers for staying in Hong Kong.