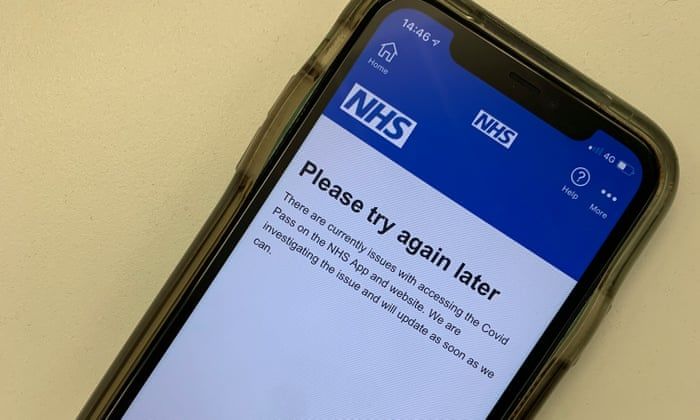 Analysis: app falling offline caused frustrated users to be turned away from flights and venues
It’s always annoying if your phone battery dies while you’re travelling – but it’s even worse if malfunctioning technology means you can’t even begin your trip.

Wednesday’s outage of the NHS app for England left frustrated users unable to prove their Covid vaccination status at airport check-ins, meaning many were unable to board flights. Others were turned away from venues that require evidence that people have been double-jabbed.

Although the NHS England app was restored after around four hours, the outage highlighted the problems that can be caused by putting a single centralised system at the heart of modern life. In an era when people expect their online accounts to work instantly, a single government-run app briefly falling offline can in effect close international travel for much of the population.

The issue is particularly pressing as Wales and Scotland have started implementing mandatory checks – also known as “Covid passports” – on the doors of certain venues such as nightclubs. If people in those countries were unable to prove their vaccination status during evening hours due to a technical issue, then big events could be left without any customers.

In Wales, where the policy came into effect this week, door staff at nightclubs had already reported running arguments with students who misunderstood the rules, claimed to have run out of battery on their phone and were unable to show proof of vaccination, or were struggling to download their vaccination proof before last entry.

Scotland, which has developed its own standalone app before a planned introduction of mandatory vaccine checks next week, has also had issues with technology. The first minister, Nicola Sturgeon, has apologised and said the “initial backlog” of users unable to access their health records has now been cleared.

Although Boris Johnson has – under pressure from his own Conservative backbenchers – abandoned formal plans for vaccine passports in England, some premises have voluntarily required either evidence of a Covid vaccination or a negative test to gain access. However, this has been enforced on a patchy basis. At the Labour party’s annual conference in Brighton there were visual checks that attenders had a QR code but it was not run through a verification system.

People taking flights from the UK have got used to showing the QR codes generated by the service, which can usually be called up at a moment’s notice. However, many Apple iPhone users are unaware that is possible to save a copy of NHS England vaccination certificate to their Apple Wallet, ensuring it always available offline and avoiding the risk of the service crashing.

Paper copies are also available, although governments are doing their best to encourage people to use cheaper digital equivalents.

A bigger issue is for people currently travelling across Europe, where countries are increasingly demanding evidence of double-vaccination to enter bars, restaurants, and public spaces. Brexit means Britons have so far been cut out of the EU-wide vaccine passport scheme, with many finding proof-of-vaccination QR codes produced by the UK’s NHS apps are not accepted by local venues.

Talks are ongoing about fully integrating the British data into the EU Digital Covid Certificate scheme but in the meantime people planning a holiday in Europe are being advised to be prepared for technical difficulties – and advised to check ahead if they want to be let into venues. Until then many Britons travelling in Europe have been putting their UK status into “‎TousAntiCovid” – an app produced by the French government which recognises NHS vaccination certificates.
#Boris Johnson  #Johnson  #vaccine  #Covid
Add Comment