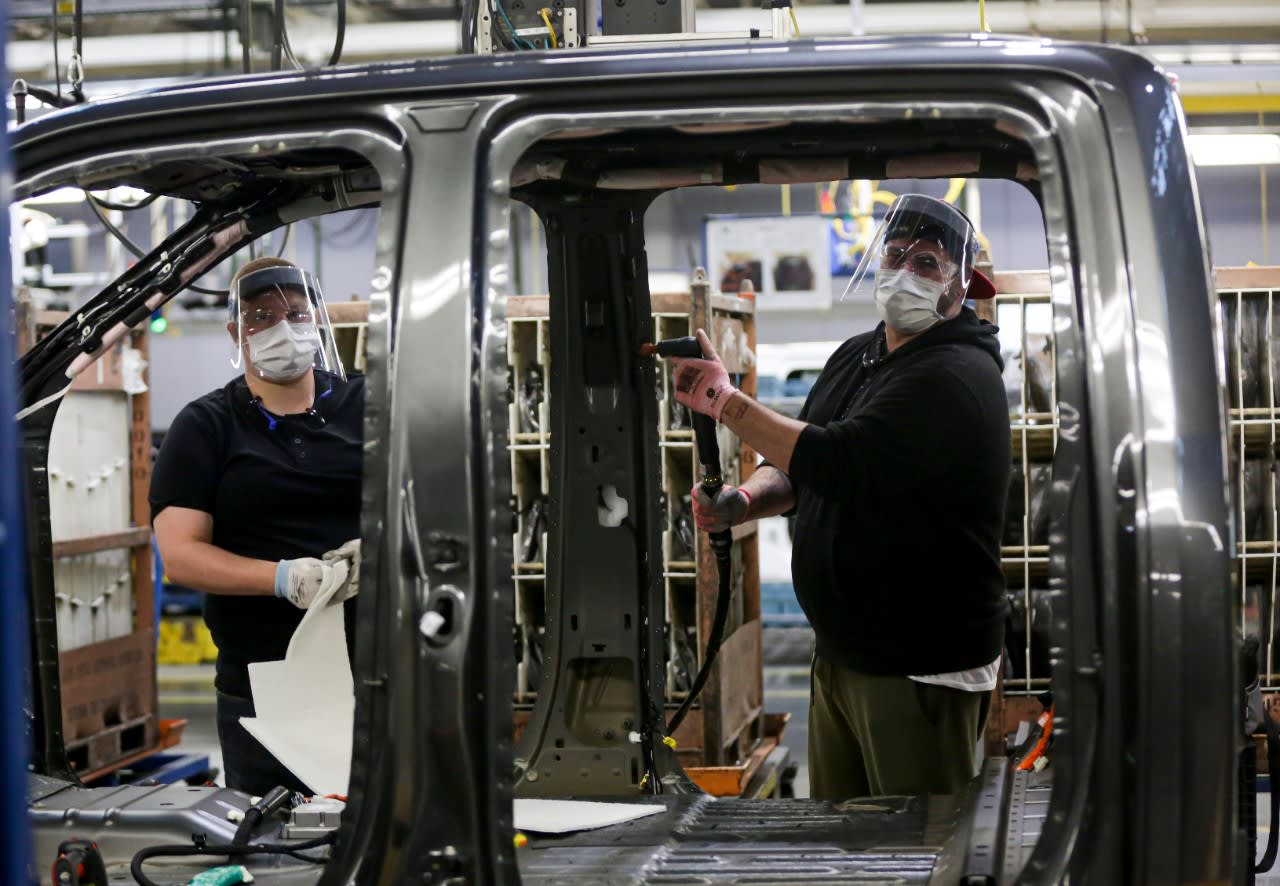 It wasn't a matter of if but when someone with Covid-19 would unknowingly enter a factory as tens of thousands of American autoworkers returned to work. And it only took two days.

At least three Ford Motor employees at plants in Illinois and Michigan tested positive for the disease this week, causing temporary shutdowns for deep cleaning. The shutdowns were within days of the plants’ reopening after being shuttered since March due to the coronavirus pandemic.

Production interruptions because of new infections is expected to be an ongoing issue for the foreseeable future as plants across the country continue to ramp up manufacturing.

“This is going to be rocky,” said Kristin Dziczek, vice president of industry, labor and economics at the Center for Automotive Research. “You’re looking for a sustained path to full production with some bumps in the road, and these are bumps in the road.”

While automakers have implemented extensive safety protocols to minimize the spread of Covid-19 on the factory floor, they can’t control what employees do outside of work. U.S. health officials say some carriers of the disease can be asymptomatic, making it difficult to detect who has the disease without testing.

“It’s not a matter of necessarily creating a condition where it’s impossible for anyone to get sick,” said Stephanie Brinley, principal automotive analyst at IHS Markit. “What they’re creating is an environment with which to handle it if something does happen, and to handle it quickly.”

That’s what happened at the Ford plants Tuesday and Wednesday, according to company officials. As soon as the employees exhibited potential symptoms, they were tested and quarantined. Those around them were also asked to self-quarantine for 14 days, the company said.

While exact details are scarce due to health privacy laws, a person familiar with the situation said the employees began showing symptoms while working separate shifts at Ford’s Chicago Assembly plant and were sent to a hospital for testing.

“Protocols are in place to help stop the spread of the virus,” the company said in a statement. Studies show it takes five to 12 days for symptoms to show in most patients. Given the incubation time of the disease, the company said the employees did not contract Covid-19 at work.

General Motors and Fiat Chrysler declined to disclose how many employees have been tested since they started reopening factories on Monday.

Neither company has closed plants this week.

“We have not had an instance of community spread in one of our facilities to date, our production restart has gone smoothly and our health and safety protocols are working,” GM said in an emailed statement. “As we always have, if there are individuals who are identified as having been exposed to COVID-19 or who turn out to have COVID-19 symptoms at a GM facility, we will take appropriate action to protect everyone’s health because the safety of our team is our overriding priority.”

The Detroit automakers, pressured by the United Auto Workers union, have been the most open to testing employees for Covid-19 compared with other automakers.

While each has slightly different procedures and safety protocols, they have the same goal: Identify anyone with the disease as quickly as possible and reduce the risk of them spreading it to others.

The protocols include alerting a supervisor of any symptoms, testing and, if positive, quarantining for 14 days. The companies also will deep clean affected work spaces and track down everyone who came in contact with the infected person. Those people may also need to quarantine, depending on the interaction.

Automakers won’t necessarily have to completely shut down plants for every positive test.

“It depends on how much that person who tested positive moved about the plant and were exposed to other people,” Dziczek said. “They need to clean where they’ve been.”

GM has testing kits at each of its plants. It also has established relationships with companies such as LabCorp and Sonic Healthcare to receive results within 48 hours.

Ford and Fiat Chrysler don’t have testing at plants. They instead formed relationships with hospitals such as Beaumont Health, Michigan’s largest hospital system, to conduct testing of workers who are believed to have contracted the disease.

“We’ve spent a lot of time researching testing and testing options with external health experts,” Ford Chief Human Resources Officer Kiersten Robinson told reporters on April 30. “The bottom line is based on all the information we have access to, we will not have a reliable and scalable testing solution for several weeks, and it may even be months.”

Robinson said the company created a task force of employees to partner with health and academic institutions “to fast track and progress a testing solution.”

“This is a key priority for us,” she said. “Longer term, we do think it’s going to be critical.”

To assist in detecting employees with Covid-19 prior to them entering plants, the Detroit automakers and others have implemented pre-work questionnaires and body temperature checks upon arrival.

To reduce the spread of the disease, significant safety protocols have been put in place and workstations have been redesigned. Employees also must wear face masks or face shields and are urged to social distance during breaks, lunch and whenever possible.

The UAW pushed for mass testing for all of its roughly 150,000 members with GM, Ford and Fiat Chrysler before the plants reopened.

Due to the costs, reliability and complexity of such a process as well as a shortage of tests, the automakers and union compromised on the current testing protocols to reopen. But UAW President Rory Gamble is pushing for as much testing as possible.

“In terms of testing, I have said to all of our employers that we expect a commitment from them for full testing as soon as it is possible,” he wrote in an open letter to members earlier this month. “Until then, we expect as much testing as is possible to be conducted.”

The letter was to address questions surrounding the International UAW, which oversees all of the local chapters across the country, conducting testing on its 400 or so employees in Michigan.

“We must lead by example in this unprecedented situation,” Gamble wrote.

UAW staffers received nasal swab and serological tests to determine if they had or have the disease. Only six employees tested positive, according to the union.

For now, the Detroit automakers remain skeptical of mass testing.