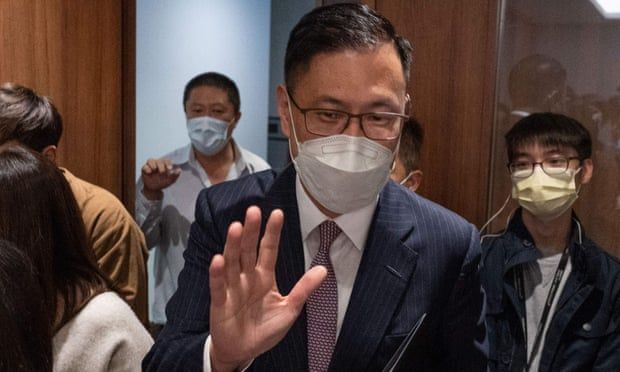 The newly elected leader of Hong Kong barristers says that his profession should avoid politics and build closer ties to mainland China, as concerns grow about rule of law in the financial hub.

The Hong Kong Bar Association has been a vocal defender of human rights and its previous leader had criticised a Beijing-imposed national security law, drawing fierce condemnation from Chinese officials.

Western governments have imposed sanctions against officials over the security law, which they say has trashed Hong Kong’s freedoms and autonomy, and begun transforming the city into a mirror of the authoritarian mainland.

Victor Dawes, who ran unopposed for the bar association’s top job, told reporters on Thursday that the group’s top concern was upholding rule of law, which he said was “not a political concept”.

“For political topics, that is not something the bar association should handle or discuss.”

In 2019, the professional group had actively opposed an unpopular extradition bill, a bill that sparked Hong Kong’s largest and most violent democracy protests in decades.

Dawes said he understood why some people would be pessimistic about the city’s rule of law, but said barristers still had a key role to play.

“Personally I don’t believe the rule of law is dead,” he said.

Dawes, as well as two other barristers running for deputy spots, have been described in local press as moderates who rarely comment on social issues.

Asked whether his candidacy was a compromise option to mollify Beijing, Dawes said that he and his two colleagues had not been “encouraged or had any support from the central authorities” in their decision to run.

The professional body should seize opportunities to develop business in mainland China and mend ties with stakeholders, Dawes said, without giving specific proposals.

Last year, Bar Association chair Paul Harris was criticised as a “rat in the street” by People’s Daily, the mouthpiece of China’s ruling Communist party, after he suggested the government should amend security laws to ensure human rights were protected.

Dawes said the national security law was still “in its early days” and local courts should be given time to interpret and clarify the law.

Despite its roots in the British colonial tradition, the bar association had enjoyed warm relations with mainland officials and would be invited to visit Beijing every year - a practice which has lapsed in recent years.

Dawes said Thursday the barristers’ group would “definitely want to go to Beijing” if invited.