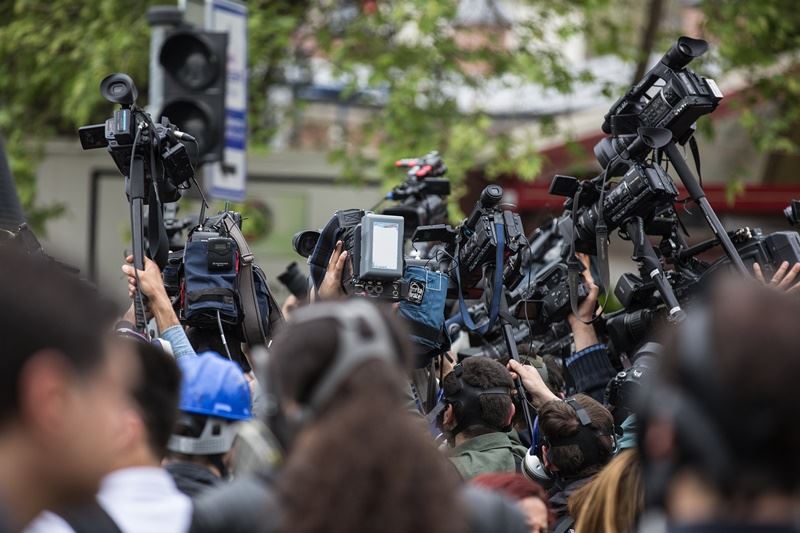 Nearly half of Hong Kong-based journalists polled, or 46 percent, said they were considering leaving the city due to a decline in press freedom under a Beijing-drafted security law.
A press freedom survey published Friday by the Foreign Correspondents’ Club, Hong Kong, painted a dire picture of the former British colony’s media landscape since China imposed the broadly written national security law in June 2020.

An overwhelming 84 percent of journalists said working conditions in the Asian financial hub had declined under the law, with 56 percent saying they’d engaged in self-censorship since its passage. Only half said they understood where the government’s so-called “red lines” were.

- 91 percent of respondents were concerned about a possible fake news law.

- 86 percent said it was harder to get sources quoted on the record.

- Some journalists had deleted images out of security concerns.

- There is “widespread” concern about digital and physical surveillance.

- 56 percent had not experienced “over censorship” in their newsrooms.

“These results clearly show that assurances that Hong Kong still enjoys press freedom, guaranteed under the Basic Law, are not enough,” FCC President Keith Richburg said. “More steps need to be taken to restore confidence among journalists and to make sure Hong Kong maintains its decades-long reputation as a welcoming place for the international media.”

The survey underscores the wider crackdown on dissent Hong Kong, which enshrines freedom of speech in its mini constitution, the Basic Law -- unlike in mainland China where journalists are arrested for criticizing the government.

The former British colony has for decades been a base for international media outlets, but since the security law the New York Times has moved part of its Hong Kong operations to Seoul, citing uncertainty about the city’s prospects as a journalism hub, while in June the Apple Daily newspaper was forced to close, after several of its executives and editors were arrested under the legislation.

The city’s Security Secretary Chris Tang has in recent months attacked the Hong Kong Journalist Association, accusing it of infiltrating schools to spread political views, something the association has denied. Hong Kong ranked 80th in Reporters Without Borders’ 2021 press freedom index, down from 54th place a decade ago.

In response to the survey, the FCC has urged the Hong Kong government to notice the concern of its members, work to restore confidence in the city’s media landscape and carefully consider the impact a “fake news” law would have, reiterating its April letter to then-Police Commissioner Tang on the potential impacts of such legislation. The government has so far not stated when it might implement a fake news law.

Hong Kong leader Chief Executive Carrie Lam has previously denied the security law has impacted the media landscape. “Hong Kong has continued to enjoy press freedom,” she said in July. “The number of media outlets registered at the government’s information service system has increased, and journalists continue to monitor the government.”

In the survey, one respondent noted that Hong Kong had become worse than the mainland for journalistic reporting because no one knows what the red lines are. “There is real fear that previous coverage could be scrutinized,” the respondent wrote.
Add Comment