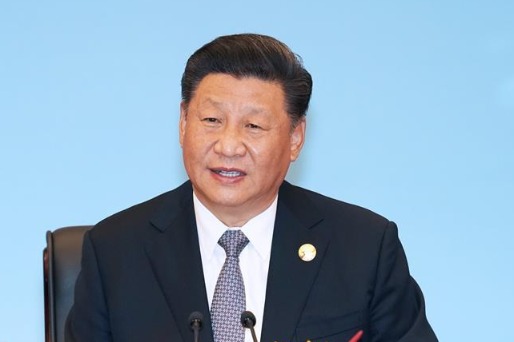 China has made great efforts to prevent the global spread of novel coronavirus pneumonia and it will continue to cooperate with other nations in a transparent manner in the fight against the disease, President Xi Jinping said on Tuesday.
Xi made the remarks in phone calls with British Prime Minister Boris Johnson and French President Emmanuel Macron.

In his talk with Johnson, Xi said material support from the United Kingdom demonstrated the friendship between the two countries and peoples.

Since the very beginning of the outbreak, people's safety and health has been the Chinese government's top priority and it has taken the strictest measures to prevent and control the spread of the disease, Xi said, adding that positive progress has been made thanks to these measures.

Noting that prevention and control of the disease has reached a critical period, Xi said that China will continue to fight the outbreak with strong measures and at the same time make efforts to ease its impact.

With its great domestic market and strong industries, China is confident of fulfilling this year's economic and social development goals, especially the major tasks of reducing poverty and building a moderately prosperous society in all respects, Xi said.

Both China and the UK are permanent members of the United Nations Security Council, and the two countries should jointly shoulder greater responsibilities amid rising global challenges, he said.

China would like to make joint efforts with the UK to maintain multilateralism and free trade and enhance communication on major global and regional issues, Xi added.

Johnson spoke highly of the measures taken by China to prevent and control the disease, share information with the international community in a timely manner and make efforts to stop the global spread of the disease.

Johnson expressed admiration for China's efficient performance in fighting the outbreak, saying that his country would continue to provide support and help to China.

Johnson said he believed that the Chinese people, under Xi's leadership, will gain victory in the fight against the disease and minimize its economic impact.

He added that the UK welcomes investment by Chinese enterprises, and the country would like to enhance cooperation with China under the Belt and Road framework.

In his phone conversation with Macron, Xi expressed gratitude and appreciation for France's support for China's fight against the disease.

China has great capabilities in mobilizing the nation and rich experience in dealing with public health issues, Xi said, adding that China will definitely win the battle against the disease.

China is making efforts to support companies and public institutes in restarting their production and work, and the supply of goods is sufficient, Xi said.

The disease's influence on the Chinese economy would be temporary, and China is confident of achieving its goals for social and economic development this year, he added.

China has upheld the principle of openness and transparency to cooperate with all countries including France in fighting the outbreak, Xi said, adding that China would like to enhance health cooperation with France to maintain safety and public health worldwide.

Macron expressed admiration for China's effective measures and the country's openness and transparency in fighting the disease. France has provided medical assistance for China, and it will continue to do so, he said.

France respects the professional judgment made by the World Health Organization, and the French consulate general in Wuhan is still open, he said, adding that France would like to take this opportunity to enhance health cooperation with China.

Xi and Macron previously had a phone conversation on Jan 22, during which the French president expressed support for China's fight against the disease.
#Boris Johnson  #Coronavirus  #Johnson
Add Comment