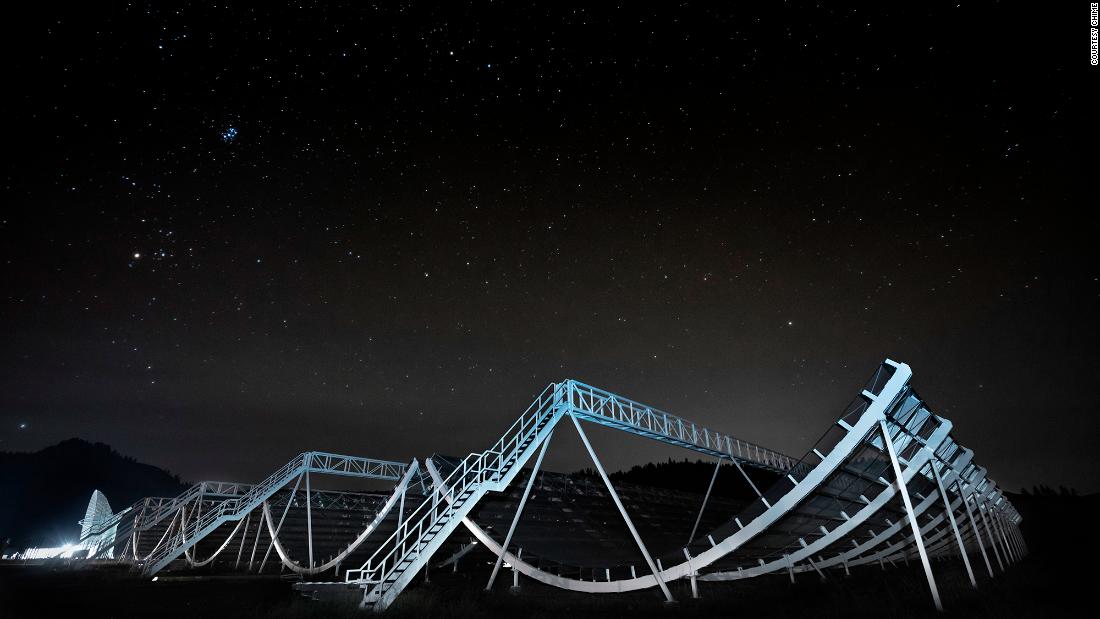 Mysterious radio signal from space is repeating every 16 days

Mysterious radio signals from space have been known to repeat, but for the first time, researchers have noticed a pattern in a series of bursts coming from a single source half a billion light-years from Earth.
Fast radio bursts, or FRBs, are millisecond-long bursts of radio waves in space. Individual radio bursts emit once and don't repeat. But repeating fast radio bursts are known to send out short, energetic radio waves multiple times. And usually when they repeat, it's sporadic or in a cluster, according to previous observations.

Between September 16, 2018 and October 30, 2019, researchers with the Canadian Hydrogen Intensity Mapping Experiment/Fast Radio Burst Project collaboration detected a pattern in bursts occurring every 16.35 days. Over the course of four days, the signal would release a burst or two each hour. Then, it would go silent for another 12 days.

The findings are included in the pre-print of a paper on arXiv, meaning the paper has been moderated but not fully peer reviewed. The authors of the paper are part of the CHIME/FRB collaboration, which has published a multitude of fast radio burst studies in recent years.

Researchers hope that by tracing the origin of these mysterious bursts, they can determine what caused them. So far, they have traced single and repeating fast radio bursts back to very different sources, which deepens the mystery.

The first repeating fast radio burst traced, FRB 121102, linked back to a small dwarf galaxy containing stars and metals. FRB 180916 was traced to one of the spiral arms of a Milky Way-esque galaxy. It was also within a star-forming region of the arm, the researchers said.

Now, the evidence of a pattern in the signal adds to the question of what could cause these bursts to emit the way that they do.
"The discovery of a 16.35-day periodicity in a repeating FRB source is an important clue to the nature of this object," the researchers wrote in their study.

In the paper, the researchers consider the possible causes, like the orbital motion of a star or an object that acts as a companion in the outskirts of the galaxy. The authors of another paper, who consulted with the researchers who discovered the pattern, suggest the cause could be coming from a neutron star and early OB-type star binary system.

Neutron stars are the smallest in the universe, the remnants of supernovae. Their diameters are comparable to the size of a city like Chicago or Atlanta, but they are incredibly dense, with masses bigger than that of our sun. OB-type stars are short-lived hot, massive stars. The interaction between these two, and the wind coming off of the OB-type star, could factor into the cause of the repeating FRB's pattern.

Understanding fast radio bursts can also help astronomers learn more about the universe itself. The more bursts they can trace, the better they may be able to use the signals to map how matter is distributed across the universe.

The researchers believe that future observations could help them determine if other repeating fast radio bursts have a pattern. That way, they'll know if this kind of periodicity is the exception or routine behavior.
Add Comment