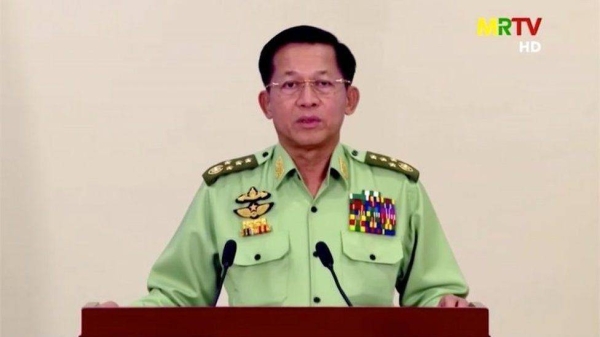 The military has promised to hold "free and fair" elections in the future.

But on Monday it said it needed more time to stabilise the country. Emergency rule gives it more powers to detain people.

Many in Myanmar are skeptical the military will hold multi-party elections or transfer state power to an elected government.

In his remarks reported by state media, he also said the country's electoral system should be reformed by combining the first past the post system, under which Ms Suu Kyi's National League for Democracy (NLD) won convincingly in the 2020 election, with proportional representation.

The influence of "powerful parties" had drowned out other political voices, he said.

The army - known as the Tatmadaw - launched the coup after alleging there had been massive voter fraud in the 2020 election, in which the NLD got more than 83% of the vote.

International observers said the voting was largely free and fair.

The army arrested Ms Suu Kyi and several ministers from her party. Ms Suu Kyi was moved to solitary confinement in June.

Millions took to the streets in largely peaceful protests calling for the military to relinquish power. The military responded with live fire, water cannons and rubber bullets.

One rights group, the Assistance Association of Political Prisoners (AAPP), says security forces have killed more than 2,100 people. The military is also accused of detaining thousands of political and civil society opponents.

The military government is widely resisted outside the capital Naypyidaw, and there is an active guerrilla front known as the People's Defence Force (PDF).

Gen Min Aung Hlaing also invited the leaders of Myanmar's ethnic rebel armies - which have fought each other and the government for decades - for a second round of talks.

Several rebel groups took part in a first round of talks in May but others which are fighting alongside the PDF did not attend.
Add Comment