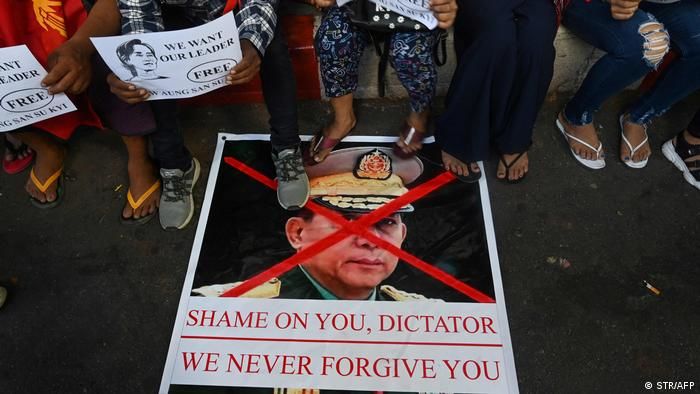 One year ago, Myanmar's generals took power away from the county's democratically elected government. But the ruling junta faces heavy challenges — and resistance to its rule will continue to come at a great human cost.

Since Myanmar's military, the Tatmadaw, took power on February 1, 2021, thousands of demonstrators, resistance fighters, officials, soldiers and civilians have been killed.

The exact death toll is difficult to determine and largely depends on human rights organizations still active in the country.

An anti-junta human rights group, the Assistance Association for Political Prisoners (Burma), said on January 13 that 1,463 "heroes" have so far died resisting the coup.

An NGO called the Armed Conflict Location and Event Data Project (ACLED) has estimated that the total number of deaths related to the coup stands at more than 11,000, a number reached based on newspaper articles, NGO reports and fatalities reported on social media.

An estimated 1.6 million people have lost their jobs since the coup, according to a study released by the International Labor Organization (ILO) in January. Nearly 350,000 people have become internally displaced, according to UN figures. More and more journalists are being killed, imprisoned, or have fled the country.

"I think the current situation is the most desperate since Myanmar became independent after the Second World War. Basically, the February coup was a declaration of war by the military against the Myanmar people," wrote Myanmar expert David Scott Mathieson in The Irrawaddy newspaper.

In past decades, conflicts in Myanmar were fought primarily between the Tatmadaw, which is recruited from the Bamar ethnic majority, and militias affiliated with ethnic minority groups living on the country's fringes. Today, however, fierce fighting takes place in Myanmar's heartland, such as in the central state of Sagaing.

This widespread armed resistance emerged after nationwide protests by hundreds of thousands of people opposing the Tatmadaw were unsuccessful in toppling the junta. The military succeeded in driving people off the streets with the use of massive and deadly force. However, this use of violence has tended to turn the overall public more and more against the junta.

Although there are no empirical studies available, many observers agree that a clear majority of Myanmar's population rejects the military government.

There is evidence that armed "people's militias" are springing up across the country. Military expert Anthony Davis wrote in Asia Times newspaper that 50 of the "people's defense forces" have been established, some of which are supported by armed ethnic groups.

The militias carry out attacks on military personnel, police officers, informants and security installations, and even engage in skirmishes with the Tatmadaw.

Ethnic groups and their armies have long operated independently of the central government in Myanmar. They factor in the power struggle between the recently created people's militias, the civil disobedience movement, and the military.

Some of these ethnic groups provide shelter and training to the military's opponents. However, these groups often insist on having total command over the areas they control, according to a recently released report by the International Crisis Group.

The report also points out that while many armed ethnic groups are hostile to the military, only some do openly support the opposition because the outcome of the conflict remains uncertain.

Although no one knows for certain how the situation in Myanmar will develop this year, three scenarios are conceivable. Either the military prevails, the opposition gains the upper hand, or the current stalemate continues. However, none of these three scenarios would lead to peace and development for Myanmar.

Should the military prevail, regain control over large parts of the country, and call for elections as it promised, a large part of the population would still reject the Tatmadaw's legitimacy.

The military would then have to rely permanently on repression and surveillance to stay in control, and its position would not be consolidated for the foreseeable future. Under such conditions, economic and political development would be difficult.

A second scenario involves the success of Myanmar's government in exile, the National Unity Government, a group of ousted parliamentarians called the Committee Representing Pyidaungsu Hluttaw (CRPH), and their "people's defense forces."

This would mean Tatmadaw soldiers and their families, whose numbers total in the hundreds of thousands, would need to be somehow integrated into society. Otherwise, new militias and armed groups could emerge that would continually destabilize the country.

There is also a danger of Myanmar splintering further along ethnic lines. At no time since Myanmar's independence has the central government had control over the entire national territory.

And since last year's coup, regions and ethnic minorities have used the overall instability to further expand their autonomy. A transitional phase following the collapse of the military and the establishment of a new system could be used opportunity by some ethnic minority groups to consolidate control.

Neither side strong enough

However, most experts believe that no military solution can be expected in the foreseeable future.

The people's militias lack military equipment, strategy and coordination. At best, there is a rudimentary chain of command. The exiled Government of National Unity, which has not yet been recognized by any government in the world, has few financial resources. It is also based on Myanmar's fringes near the border with Thailand. This makes it dependent on the goodwill of ethnic minorities in the region and the ruling military regime in Thailand, which also came to power in a coup.

The Tatmadaw, on the other hand, is struggling with the fact that almost the entire country is in turmoil, and this prevents it from concentrating its forces. Troop morale is also dwindling, according to military expert Davis.

The military could face recruitment problems in the medium term, not only among rank-and-file soldiers but also among officers. The Tatmadaw over the past year has drawn so much public animosity, that fewer and fewer people are willing to join (there is no conscription). The military is also considered to be an occupier by the opposition. Unlike the historical examples of the British and Japanese occupations of Myanmar, the Tatmadaw has nowhere to retreat. Its struggle is therefore a question of survival.

A continuing stalemate is the most likely scenario moving forward for Myanmar.

"Neither the military nor the opposition will prevail in the foreseeable future; the resulting intensification of the conflict will have significant humanitarian consequences," the International Crisis Group said recently.

In other words, neither side wins, but the entire country and its people lose.

DW spoke to one person in Yangon, who has asked to remain anonymous due to fears for their safety, about what he expects for the next year. The man said he expects a grueling war of attrition will eventually lead to negotiations, even if talks seem unimaginable now.

When both sides realize that they cannot win, and when the country has suffered a heavy toll of bloodshed and devastating economic damage, negotiations will become imperative, he said.

The man believes this is the only way forward and he hopes the parties will come around sooner than later.

Until then, he said, Myanmar needs humanitarian aid above all. And this is where the global community, including the United Nations, Europe, and the United States can make the most difference.