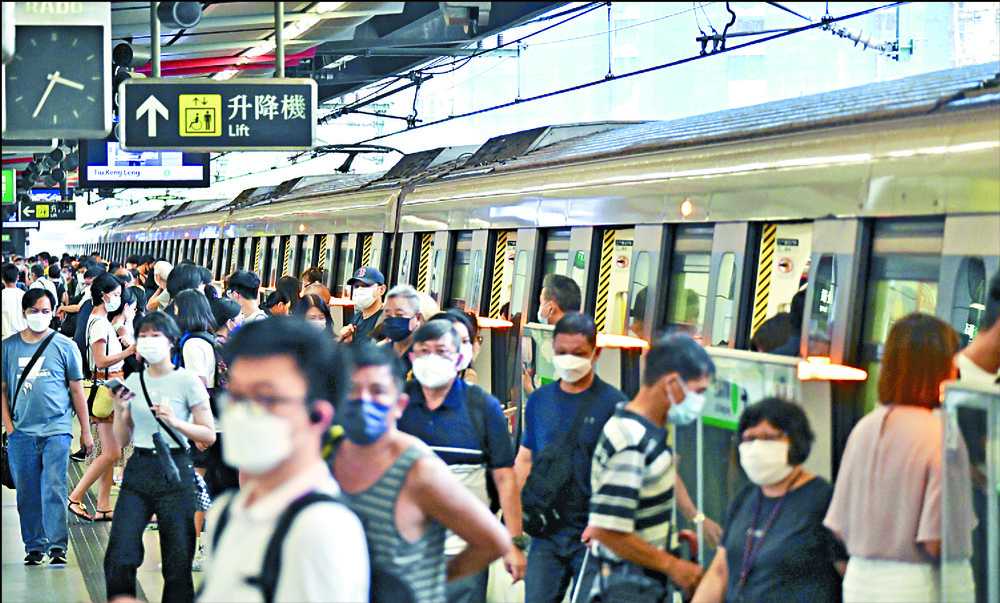 MTR will increase the frequency of its trains as it will add about 430 additional train trips per week from Saturday.
The rail operator yesterday announced that it will enhance train services on seven railway lines due to "the increase in weekend passenger flow," so they can provide "convenient travel for the public."

MTR had reduced train frequencies along some railway lines during the fifth Covid-19 wave due to a staff shortage and fewer passengers, but train frequencies of most lines had resumed to about every 2.4 to 6.5 minutes from May.

From this Saturday, train frequencies will be further enhanced on the East Rail, Kwun Tong, Island, Tsuen Wan, Tuen Ma and Tseung Kwan O lines during various hours on weekends and public holidays.

For the South Island line, trains will arrive every six minutes during non-peak hours on weekdays starting Monday.

MTR Corp also said that it will enhance services during morning peak hours before the beginning of the new academic year next month to facilitate students returning to schools.

Most train services, except the Airport Express and Disneyland Resort line, as well as Light Rail and MTR bus services, will be enhanced between 6.15am and 7.15am during the morning rush hour on September 1, 2 and 5.

Also, in order to facilitate people living in northwest New Territories to commute to work or school, the MTRC said it will operate a new MTR bus route K51A from Monday, which will run between Tuen Mun So Kwun Wat and Fu Tai.

A 507P Light Rail special trip will also be provided starting from September 1, which will run from Siu Hong to Tuen Mun ferry pier every morning from Monday to Friday.

The new service would facilitate students and residents commuting in the area, the MTRC said.
#COVID-19  #Covid
Add Comment