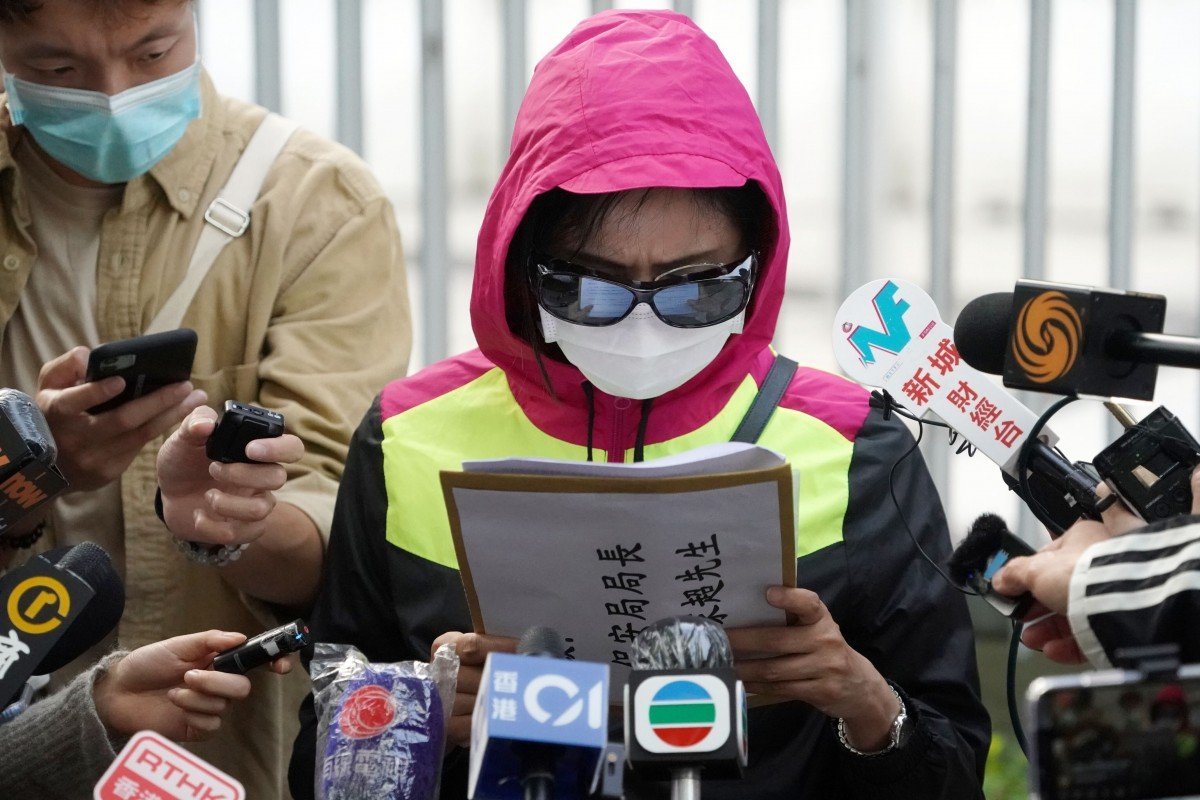 The desperate mother of a murder victim whose quest for justice has been stymied by a political tug of war between Hong Kong and Taiwan has demanded the city’s security chief set aside his “diplomatic tone” and deliver firm action.

In a tearful appearance before members of the press on Tuesday, Poon Hiu-wing’s mother, who covered her face with sunglasses and a face mask to protect her identity, read out a letter to Secretary for Security John Lee Ka-chiu outside government headquarters, issuing three demands in her campaign to bring her daughter’s murderer to justice.

Calling for the self-confessed killer, 22, to be booted from the police safe house where he has lived for months, the woman issued a direct message to Lee: “Release Chan Tong-kai immediately.” 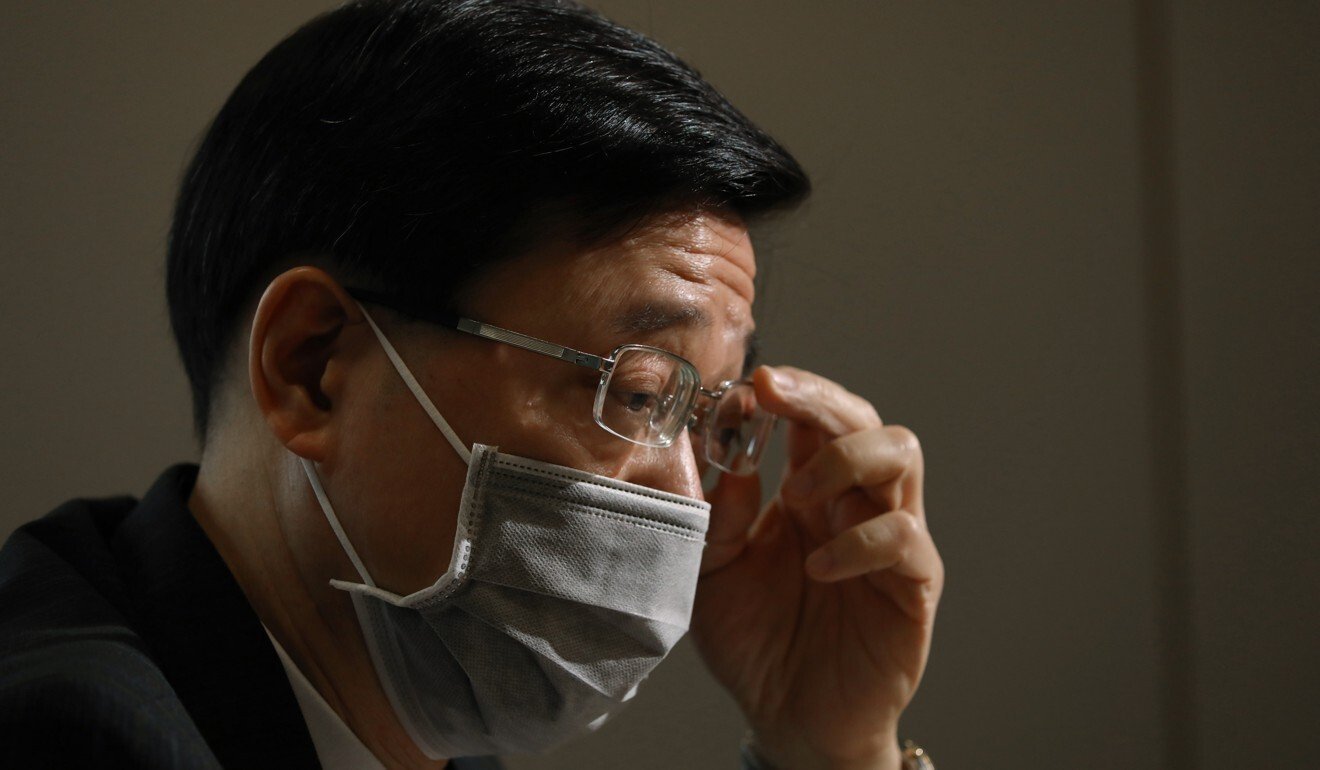 Secretary for Security John Lee speaks in an interview in June.

The woman’s 19-year-old pregnant was murdered during a trip she took with Chan to Taiwan two years ago.

Chan immediately returned to Hong Kong and served jail time over money-laundering offences related to the killing. However, local courts lack the jurisdiction to try him for the murder itself – despite his confession – and the government has no legal framework to extradite him to Taiwan.

Since his release from prison, Chan has been staying in a police-operated safe house. 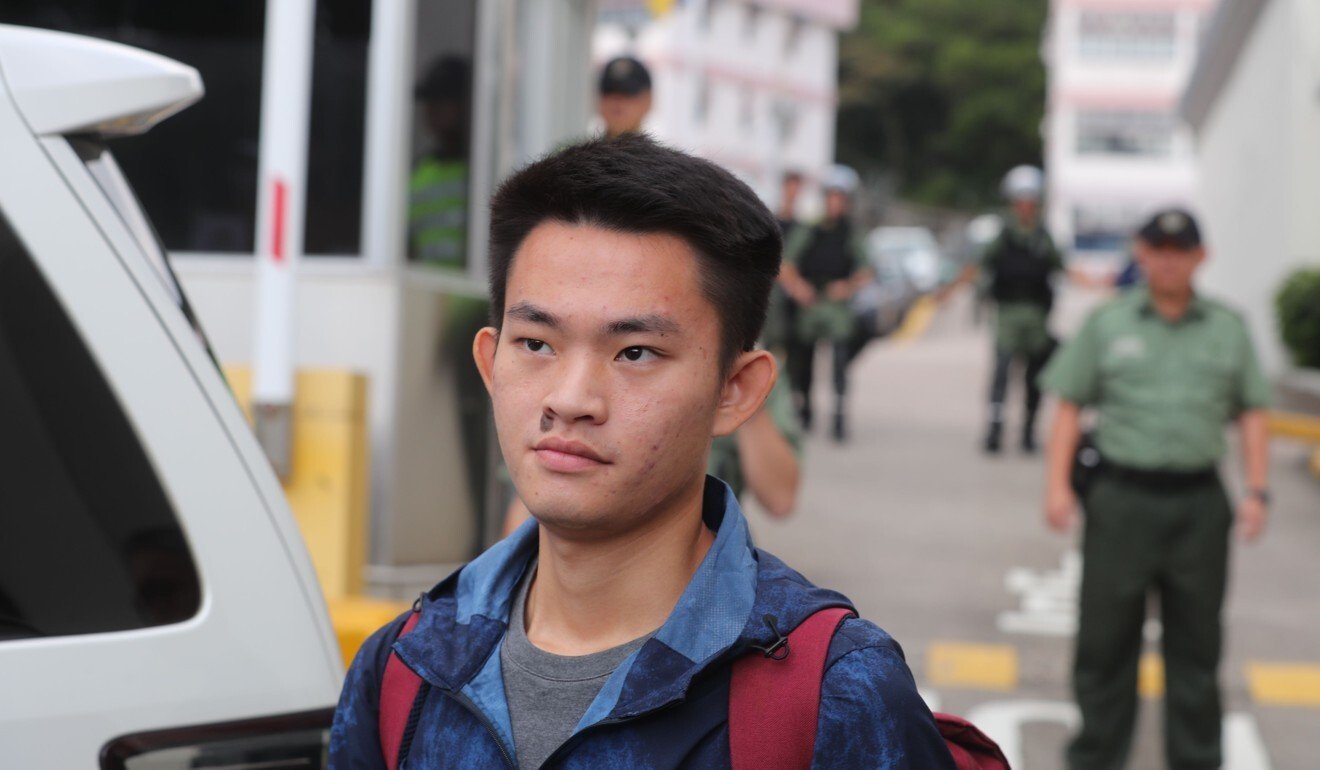 Chan Tong-kai walks out of the Pik Uk Correctional Institution in October of 2019.

Two weeks ago, Taiwan said it would allow Chan to apply for a visa at its Economic and Cultural Office in Hong Kong. But Reverend Canon Peter Koon Ho-ming, who has been assisting him, confirmed a previous Post report that the office did not accept a visa application he made on the suspect’s behalf.

A source told the Post at the time that the Taiwanese authorities required the Hong Kong government to give them a heads-up before things could proceed.

Poon’s mother on Tuesday called on Lee to cancel the government’s arrangement to protect Chan, saying the move would compel him to made another attempt at securing the visa.

In her second demand, she urged investigators to hand over all evidence relating to his case to the Taiwanese authorities – something that has proved difficult due to the lack of a formal extradition agreement.

The third demand went out to Chan himself, with the mother warning that the ultimatum she previously issued – that she would offer mitigating testimony on his behalf if he turned himself in – was about to expire on October 23, a year after Chan was released from jail.

“I hope you will cherish the chance of me mitigating for you if you surrender yourself to Taiwan as soon as possible,” she said.

Addressing the security chief, she expressed dismay that Chan was still allowed to walk free and was being provided with a safe house funded by taxpayers as well.

“As a former law enforcement officer, don’t you see the problem?” she asked Lee, who served as deputy police commissioner from 2010 to 2012.

“If he committed a crime again, could you shoulder all the responsibility?” she added, demanding Lee give her a straight answer. “Do not resort to those unconstructive and diplomatic responses.”

She urged both the Taiwanese and Hong Kong governments to cooperate, although she insisted the latter do more.

Lee did not show up to receive her letter but sent a representative. The mother said she was informed she would also get a reply from the Security Bureau to another letter she sent previously, but after waiting for 45 minutes, she left without hearing back from officials.

A spokesman from the Security Bureau said on Tuesday evening that the secretary understood the family’s heavy heart, and maintained authorities had “always hoped that Chan Tong-kai will be able to make his way to Taiwan as soon as possible to face justice”.

He added the protection for Chan offered by police was based on an assessment, but officers would not obstruct him from getting a visa if he decided to do so. He also pointed out that there was currently no law allowing Hong Kong to provide the Taiwanese authorities with evidence, or to make arrangements on Chan’s behalf.

The spokesman went on to accuse Taiwanese authorities of obstructing the process, saying they “defied logic and common sense, and [were] unbelievable”.

He added that so long as Taiwan was willing to take Chan, police officers from both places could sort out the details.

The bureau also said there was little Hong Kong could do because there was no extradition arrangement with Taiwan.

“Hong Kong has not restricted Chan Tong-kai from going out of Hong Kong and the crux of the issue now is that Taiwan refuses to let Chan Tong-kai get in.”

Taiwan, for its part, has said it set up a specific mechanism to communicate with Hong Kong over the case, but Hong Kong authorities reportedly declined to engage with it, saying in their eyes Chan was already a free man.

Last year, Chan’s case became the impetus for the government’s ill-fated extradition bill, which would have allowed renditions of criminal suspects not only to Taiwan, but to mainland China as well.

The deeply unpopular bill triggered a months-long anti-government protest movement demanding not just the withdrawal of the legislation, but greater police accountability and universal suffrage, among other goals.