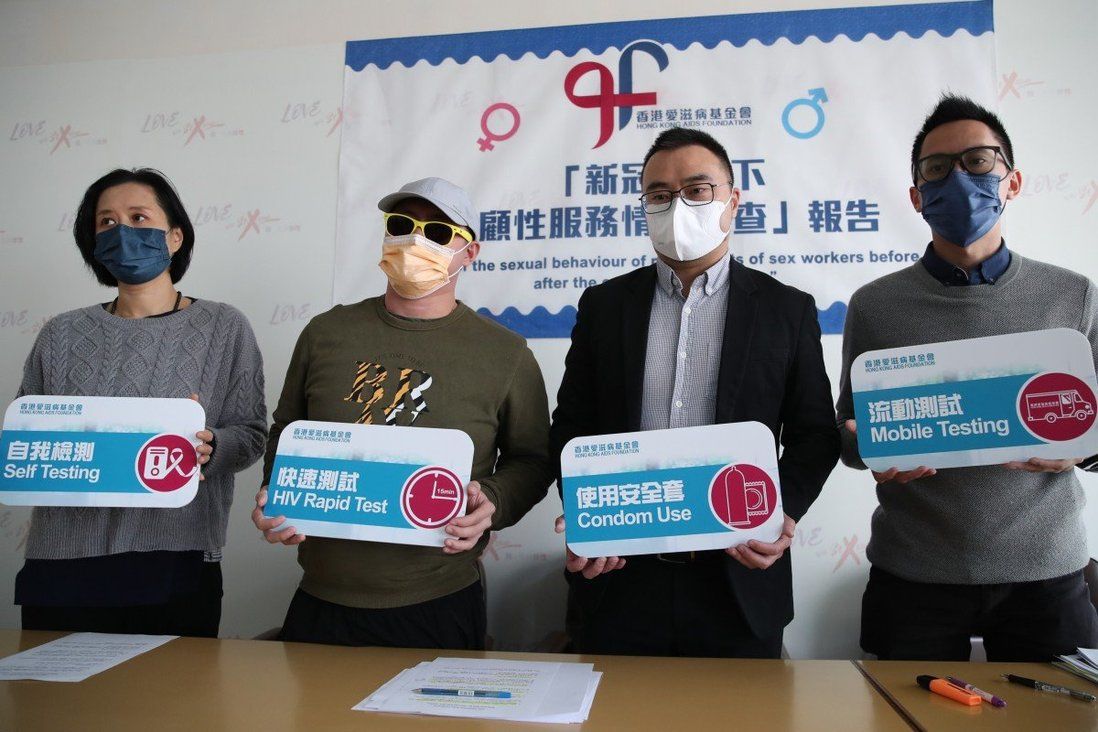 Most men in Hong Kong who pay for sex still do so during Covid-19: survey

Nearly 70 per cent of men in Hong Kong who visit sex workers have continued to do so during the Covid-19 pandemic but while most have cut back on the practice few bother to wear masks, a survey has found.

The Hong Kong Aids Foundation, which aims to enhance public awareness and limit the spread of HIV in the community, said 66 per cent of respondents in its online survey of nearly 600 male clients of sex workers had reduced the frequency of such visits, mainly due to concerns over Covid-19 transmission and the government’s pandemic prevention measures.

Just 6 per cent wore a mask during sexual contact, compared with 54 per cent who did not. The rest were masked for part of the interaction.

Men aged between 18 and 29 accounted for 59 per cent of respondents in the online questionnaire, carried out between October 29 and November 5. Some 56 per cent said they were degree holders.

Wearing a mask during sexual activity is recommended if the individual is unvaccinated and with someone from outside their household, according to the Mayo Clinic, a respected US academic medical centre. Minimising the number of sexual partners is also recommended.

Local infectious disease specialist Dr Wilson Lam said that while sex was a topic that sparked interest, it was just another form of close contact.

“Covid-19 is transmitted by droplets and physical contact. Any close contact – be it sexual contact or other maskless interactions – can lead to the spread of the disease.”

Theoretically, wearing a mask during sex can cut the risk of Covid-19 transmission. However, taking part in many social activities at the height of the pandemic was not recommended, he added.

Some 21 per cent of respondents said they took an HIV test at least once a year before the pandemic but the number fell slightly to 18 per cent after that. Most of those who chose not to get tested did so as they thought they had no risk of infection.

More than 80 per cent of respondents said they used a condom “every time” during visits to sex workers. Three per cent “never use” condoms.

Promotion of HIV testing among the MSM (men who have sex with men) community had “achieved significant results”, said Timothy Wong, senior programme manager at the foundation.

“Yet the HIV infection risk among female sex workers and their male clients shouldn’t be ignored … This situation is worthy of attention.”

The organisation urged the government to help increase the public’s understanding of HIV prevention by allocating more resources for NGOs.

Two Covid-19 cases in Hong Kong last year were suspected to be related to sex work.

A woman who said she had sex with several clients a day tested positive for Covid-19 following her arrest in an anti-vice operation in October 2020. The following month a male client in a Mong Kok brothel became the first Covid-19 patient to admit visiting a sex worker since the pandemic erupted.

Prostitution is legal in Hong Kong but organised forms such as public solicitation are not.